The Bold and the Beautiful (B&B) Spoilers: Ivy Has PTSD – Steffy Pleads for Liam’s Trust – Thomas Gets The Blame 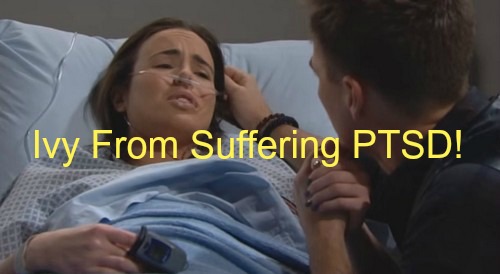 “The Bold and the Beautiful” spoilers for Thursday, December 10, tease that Wyatt (Darin Brooks) will blame Thomas (Pierson Fode) for setting this chain reaction of events in motion. Wyatt will suggest that Thomas is responsible for putting Ivy (Ashleigh Brewer) in that hospital bed.

Thomas probably won’t see things from Wyatt’s point of view, but it’s true that he played a part in all of this. Likewise, Ivy isn’t completely blameless since she cheated and provoked Steffy (Jacqueline MacInnes Wood).

Of course, Steffy appears to be the guiltiest of the bunch. There was no excuse for shoving Ivy toward a malfunctioning electrical panel. Liam (Scott Clifton) isn’t sure Steffy understands the difference between right and wrong. It’s a big issue and they need to work through it.

“The Bold and the Beautiful” spoilers reveal that Steffy will say she knows Liam wants to trust her.

Steffy will declare that Liam is a good and honorable man. It looks like Liam will have to figure out if he can accept Steffy’s flaws. It seems likely that they can put this ordeal behind them eventually. Ivy, on the other hand, won’t be able to forget what Steffy did to her. The electrocuted model clearly is suffering from PTSD.

B&B spoilers say Ivy will insist that she can’t get the horrific images out of her mind – this is a typical symptom of PTSD. Steffy pushed Ivy toward those hot wires and that memory could haunt Ivy forever and negatively impact other aspects of her behavior.

Fortunately, Ivy can take comfort in the fact that her unfaithfulness has been forgiven. That’s the only upside to her recent crisis. Wyatt will let Ivy know that he loves her and he won’t let one mistake get in the way of what they have together.

Wyatt will want to focus on the future, but can they really do that if the cloud of what Steffy did is hanging over them? Ivy may demand updates to Steffy’s behavior. Stick with “The Bold and the Beautiful” to see if Ivy will make Steffy pay for nearly killing her.

So B&B fans, what do you think about the news that Wyatt will lash out at Thomas for his portion of the drama? Are Thomas, Ivy and Steffy all a little guilty? Will Liam be willing to look past Steffy’s faults?

Can Ivy learn to forgive as well? Let us know what you think in the comments below and don’t forget to check CDL often for the latest “Bold and the Beautiful” spoilers, updates and news.

The Bold and the Beautiful Video Promo for Thursday, December 10 2015