The Bold and the Beautiful (B&B) Spoilers: Caroline’s Pregnancy Secret Revealed to Liam by Pam and Charlie

BY Heather Hughes on October 17, 2015 | Comments: one comment
Related : Soap Opera, Spoiler, Television, The Bold and the Beautiful 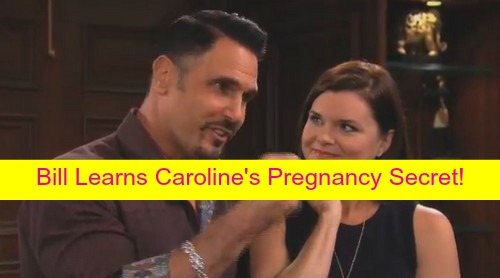 “The Bold and the Beautiful” spoilers for Monday, October 19, tease that Caroline (Linsey Godfrey) will have a tough time keeping her secret around the office. Of course, there are actually two secrets to worry about. Keeping Thomas (Pierson Fode) and Caroline’s hookup under wraps is the top priority, but Caroline doesn’t want anyone to know about her baby just yet either.

Ridge (Thorsten Kaye) and Caroline have decided to raise this child as their own. They’ll have to give everyone updates on the baby eventually, but the timing isn’t right. It would be better to let the topic of Thomas’ reassignment die down first.

Perhaps waiting will discourage people from putting it all together. Nevertheless, keeping secrets around Forrester Creations is easier said than done. It seems several employees could get tipped off to Caroline’s upcoming bundle of joy.

We all know that Pam (Alley Mills) and Charlie (Dick Christie) are B&B’s best detectives. They recently got the scoop on Maya (Karla Mosley) being transgender before nearly everyone else. “The Bold and the Beautiful” spoilers say they’ll be clued in on this secret early as well.

Pam and Charlie chose to stay tight-tipped on what Maya was hiding. It was a delicate situation. However, they won’t be able to resist spreading the word of a Forrester baby.

In the preview video for Monday’s episode, Charlie tells Liam (Scott Clifton) that his “little fruit tart” thinks Caroline might be pregnant. Pam is practically baking lemon bars for this kid already. Once Charlie and Pam spill the gossip to Liam, even more people could learn the truth.

The rumors hint that Brooke will be on the case soon. It sounds like Ridge and Caroline may have to announce their news earlier than planned.

Meanwhile, it appears Ivy (Ashleigh Brewer) will nervously prepare for her first photo shoot as a lingerie model. Naturally, Ivy and Steffy (Jacqueline MacInnes Wood) will clash. These two can’t be in the same room without bickering at some point.

Liam will step in and urge them to play nice. Unfortunately, it’s doubtful Steffy and Ivy will ever really learn to get along. Stick with “The Bold and the Beautiful” to see all the Forrester family drama.

So B&B fans, what do you think about the fact that Caroline’s secret will soon be out? How will Caroline and Ridge react once everyone knows? Will Ivy and Steffy’s beef ever end? Let us know what you think in the comments below and don’t forget to check CDL often for the latest “Bold and the Beautiful” spoilers, rumors, updates and news.