BY Stormy Elizabeth on December 24, 2015 | Comments: one comment
Related : Soap Opera, Spoiler, Television, The Bold and the Beautiful 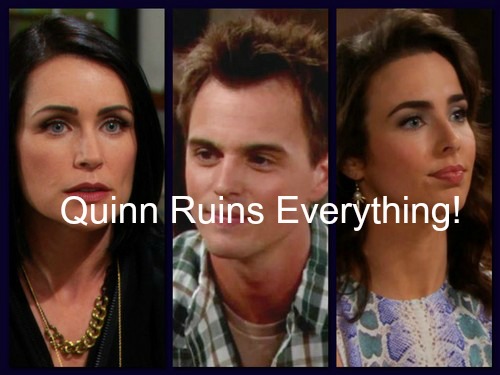 “The Bold and The Beautiful” (B&B) spoilers reveal that Wyatt Spencer (Darin Brooks) is going full speed ahead with his idea to propose to Ivy Forrester (Ashleigh Brewer). Either Wyatt didn’t hear Ivy and Liam Spencer (Scott Clifton) talking about Ivy’s feelings or he’s decided to ignore it.

Liam did not whole heartedly endorse the proposal idea, but he also didn’t tell Wyatt not to do it – that’s kind of a jerk move for a brother to make. But trust Wyatt’s mom Quinn Fuller (Rena Sofer) not to pull any punches when it comes to protecting her son.

What makes this situation doubly delightful for Quinn is that she can get Ivy out of Wyatt’s life and discredit Liam at the same time. Between now and when Wyatt drops to one knee to put a ring on it, B&B spoilers indicate Quinn will learn of Ivy’s love confession to Liam.

Quinn will also know that Liam has not come clean to his brother about Ivy’s emotional waffling. It appears that Wyatt will make it all the way to one knee and “will you…” when Quinn bursts in and shuts down the big moment.

Quinn will demand that Ivy tell Wyatt what she’s hiding from him and how she’s been coming on to Liam and trying to get him to take her back. Wyatt will be absolutely stunned. Of course, he will not want to believe his mother.

But once Ivy confirms what Quinn is saying, Wyatt will be heartbroken all over again. He just got past the casual carrying on that Ivy was doing with Thomas Forrester (Pierson Fode) and now this. Wyatt will be pained to hear that Ivy emotionally blackmailed Liam to drop the restraining order.

In fact, two engagements may be non-starters soon. After Steffy continues to act out, it looks like Liam may take back his ring. This will thrill Quinn – her meddling will have crashed both Wyatt’s planned engagement and Liam’s actual engagement.

And while it seems cruel that Quinn let Wyatt start the proposal, Quinn is a big picture gal and may have thought Wyatt needed to be hurt badly to get him to permanently break it off with Ivy. The musical chairs of romance at B&B are spinning again and it looks like Quinn’s schemes may come to fruition.

Stay tuned to CDL for more on these storylines and tons more “The Bold and The Beautiful” spoilers and news.