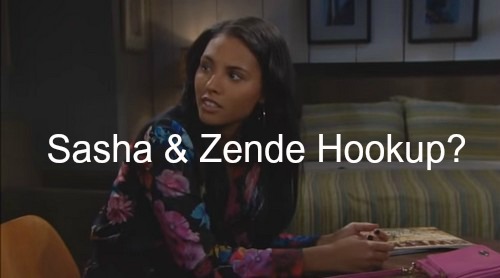 “The Bold and The Beautiful” (B&B) spoilers tease that Zende Forrester (Rome Flynn) and Nicole Avant (Reign Edwards) may soon have more than her growing pregnancy coming between them. Nicole’s back-home BFF Sasha (Felisha Cooper) may split them for good.

Sure Sasha and Nicole may have been tight when they back in the Midwest and on equal footing. But now that Nicole is living large and Sasha is so thirsty, the dynamic has changed. Looks like Sasha wants what Nicole has – and for starters, she’s focusing on Zende.

Poor Zende just wants to be with Nicole and he’s a healthy young male who wants to be intimate with his GF. But every time he looks at her lately, all he can see is that Nicole is carrying Rick Forrester’s (Jacob Young) baby. He can’t help it, but it’s throwing him off his game.

Nicole was willing to be 100% intimate with him, but Zende couldn’t deal. Sasha will now see her chance to make herself available to Zende. He’s already seen the goods (or at least most of them) when he caught Sasha in the changing room and liked what he saw.

With Nicole seemingly out of bounds for him physically because of the baby, Zende will be very tempted to get with Sasha. If Sasha can win him away from Nicole – whether for a night or for good – the fallout will be huge. Julius Avant (Obba Babatunde) already wants Sasha out of town.

Julius and Sasha are sharing a secret that none of the other Avants know. B&B spoilers hint that Sasha may be a love child that Julius has lied about for the past 18 years. Julius already wants Sasha to go away ASAP, but if she steals Nicole’s man, Julius will go through the roof.

However, the secret he and Sasha are keeping means she has leverage over him – and if he tries to force her out, she can rat him out. Julius will also direct his ire at Maya Avant (Karla Mosley) in coming days for “ruining” Nicole’s life with her baby plans.

Julius is barely teetering on accepting Maya life’s choices as it is, but when her plans mess with his baby girl’s life, Julius may become very unreasonable very fast. The question is, how soon will Sasha and Zende get intimate and will they keep it secret?

Zende getting with Sasha then regretting it seems the most likely outcome rather than him dumping Nicole and taking up with Sasha. But if Zende tries to bed Sasha to take out his frustrations then keep it a secret, Sasha won’t like that.

Sasha is already carrying the burden of Julius’ secret – she will not like being a second secret to Zende. But Sasha is also a smart girl and could use a steamy sex secret about Zende to leverage her way in at Forrester Creations – perhaps as a model.

Sasha needs a job and she’s gorgeous and leggy, so a spot as a Forrester model seems like her destiny. But with her covetous little hands in the mix at Forrester Creations, with the Avants – and with Zende – there’s no telling how much trouble Sasha could stir up in the weeks to come.

What do you think B&B fans, are you enjoying Sasha as a new character? Do you like the idea of this fresh mischief maker in the mix? Do you think Sasha will be able to take Nicole’s man? Share your comments below.

And be sure to check back with CDL often for more “The Bold and The Beautiful” spoilers and news.

Monday’s Video Preview The Bold and the Beautiful – December 21, 2015