BY Heather Hughes on November 30, 2015 | Comments: one comment
Related : Soap Opera, Spoiler, Television, The Bold and the Beautiful 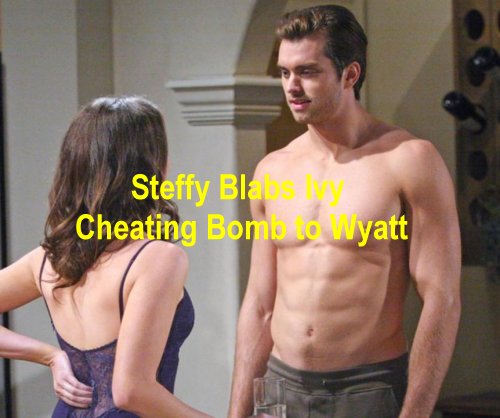 “The Bold and the Beautiful” (B&B) spoilers reveal that Wyatt (Darin Brooks) will set up another romantic evening for Ivy (Ashleigh Brewer). Wyatt hopes to wine and dine his lady at the beach house, but Steffy (Jacqueline MacInnes Wood) could force him to change his plans.

Steffy will overhear Ivy telling Thomas (Pierson Fode) that they can’t do this again. Naturally, Steffy will grow concerned about what they’ve already done. Thomas’ bet has had Steffy on edge for the past few days and Ivy’s comment won’t do anything to ease her mind.

Steffy will talk things over with Liam (Scott Clifton), but he’ll urge her to stay out of it. Nevertheless, Steffy won’t be able to resist offering a warning to Wyatt. When Wyatt starts gushing about the lovely night he has planned, Steffy will drop a major bomb.

“The Bold and the Beautiful” spoilers tease that Steffy will ask Wyatt if he can really trust Ivy. Wyatt will be appalled by what Steffy is implying. In reality, Wyatt has probably been having doubts thanks to Thomas’ flirty behavior.

Still, Wyatt doesn’t think that Ivy would cheat on him behind his back. Unfortunately, Wyatt will learn that’s exactly what Ivy’s been doing. Steffy will tell Wyatt what she knows and he’ll immediately lash out at her.

Wyatt will accuse Steffy of making up this story to get back at Ivy. After all, there’s plenty of bad blood between them. B&B spoilers say Wyatt will insist that Steffy is simply stirring up their old rivalry.

However, Wyatt will eventually decide that maybe there’s some truth to Steffy’s claims. Meanwhile, Ivy will be at the beach house waiting to come clean. It appears Ivy will be prepared to confess everything, but will Wyatt confront her before she has a chance?

Stick with “The Bold and the Beautiful” for updates on how secrets will affect their relationship. So B&B fans, what do you think about the news that Steffy will fill Wyatt in on Ivy’s cheating? Will there be some confusion about just how far Thomas and Ivy took their fling?

Will Wyatt be willing to forgive Ivy for her betrayal? Let us know what you think in the comments below and don’t forget to check CDL often for the latest “Bold and the Beautiful” spoilers, updates and news.