The Bold and the Beautiful (B&B) Spoilers: Thomas Gets Close to Ivy – Julius Breaks Up Zende and Nicole? 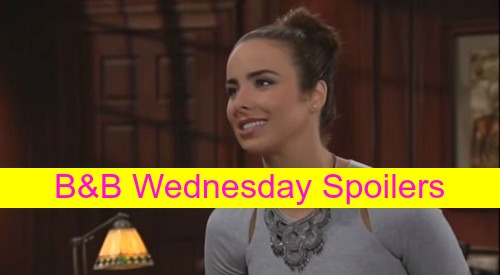 “The Bold and the Beautiful” spoilers for Wednesday, October 28, tease that Julius (Obba Babatunde) will take drastic action to stop Nicole (Reign Edwards) from making a big mistake. Julius is convinced that Nicole has been pressured into making the decision to be a surrogate for Maya (Karla Mosley).

Nicole insists that she just wants to repay her sister, but Julius thinks she’s letting Maya make the choice for her. Since Julius didn’t have any luck talking Nicole out of the surrogacy, he’ll turn to Zende (Rome Flynn) in an effort to change his daughter’s mind.

Julius will declare that he can’t let his little girl go through with this. Zende isn’t fully on board with Nicole being a surrogate, but he doesn’t want to stand in her way. Julius will think that Zende needs to speak up before it’s too late.

“The Bold and the Beautiful” spoilers say Julius will suggest that Zende isn’t doing Nicole or their relationship any favors by keeping his true feelings bottled inside. Julius will believe that Zende needs to tell Nicole he doesn’t support the surrogacy. Perhaps Julius is hoping that Nicole will see what she might lose.

It looks like Julius will start to get to Zende. “The Bold and the Beautiful” preview video shows Nicole asking Zende if they’re over. Could this really be a deal-breaker for the young couple? It’s tough to say, but it appears their days of flirty fun are behind them.

From now on, Zende and Nicole will have to discuss real issues and decide if they’re willing to accept the obstacles that are in front of them. B&B rumors hint that they’ll make it work eventually, but it’s not going to be easy.

Meanwhile, Thomas (Pierson Fode) will try to settle down at work. Ridge (Thorsten Kaye) obviously doesn’t approve of Thomas getting hot and heavy with the interns at Forrester Creations. Thomas will try to take a step back from all that and get on better terms with his father. As a distraction, Thomas will chat with Ivy (Ashleigh Brewer) and offer her some advice.

Thomas will urge Ivy to stay true to herself. Ivy and Thomas will share another warm moment later this week. Wyatt (Darin Brooks) won’t be pleased if he sees them getting too close for comfort. Stick with the CBS soap for updates on where this might lead.

So B&B fans, what do you think about the news that Julius will want Zende to discourage Nicole’s plans? Will Nicole and Zende break up over this? What about Thomas getting closer to Ivy? Will this spell trouble for Wyatt and Ivy’s relationship? Let us know what you think in the comments below and don’t forget to check CDL often for the latest “Bold and the Beautiful” spoilers, rumors, updates and news.

The Bold and the Beautiful (B&B) Video Promo for Wednesday, October 28