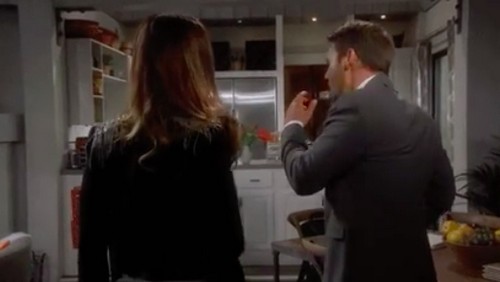 The Bold and the Beautiful spoilers look at how Steffy committed domestic violence on Liam with ‘The Slap Heard Around the World.’ Steffy Forrester [Jacqueline MacInnes Wood] slapped the stupid right off Liam Spencer’s [Scott Clifton] face, literally. Steffy and Liam have been going around and around since 2010 but it seems like a B&B eternity.

Steffy has always had to fight for her man or in some cases someone else’s man, usually Hope Logan’s [Kim Matula] men. Steffy is no rookie to competition and most of the time embraces it – must be the wild child tomboy in her. The Steffy and Liam relationship has always been adventurous and very rocky but this time around Steffy does not have Hope Logan as her rival, this time she has the brunette from down under and “Step Cousin” Ivy Forrester [Ashleigh Brewer]. 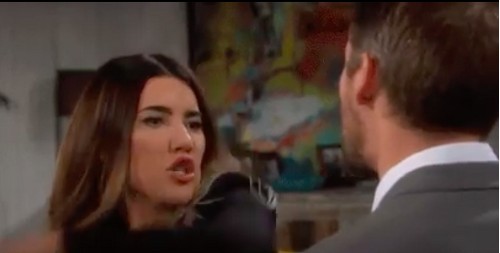 The first time Steffy met Ivy, Steffy pretty much summed her up to “no competition,” an easy pushover. Steffy has years of history with Liam and no one can change that… but new rivals have new tactics and will make new memories with Steffy’s wishy washy ex. Just recently Liam finally found his way back to his former wife Steffy and of course in true Soap Opera form it was short lived, barely a whole episode went by that Liam & Steffy were professing their love for each other when Liam marries Ivy!

A month ago we saw Liam and Ivy head over heels in love… then within weeks Liam acts like Ivy is someone he just met? Hate the game not the player or in this case the ridiculous B&B script. Which leads us to a very important subject: how does one act when the “love of their life” marries someone else? Is it proper to HIT the person you are unhappy with? This is a subject that should not be taken lightly, yes most cheered when Steffy smacked the living daylights out of Softy Liam but was that ok?

If that was a woman getting smacked like Liam was the Internet would have blown up from outrage of the DOMESTIC VIOLENCE we all witnessed. That is just what it was domestic violence. Is Bradley Bell now going to try to tackle another “social issue” that is very real to millions of people, male or female or is he going to push it under the rug because in his eyes ‘Liam deserved it?’ Bell loves the shock value as he has shown in the Maya [ Karla Mosley] used to be a man scenario, ANYTHING for ratings, but the problem is he is not helping deal with issues he is adding gasoline to the fire! 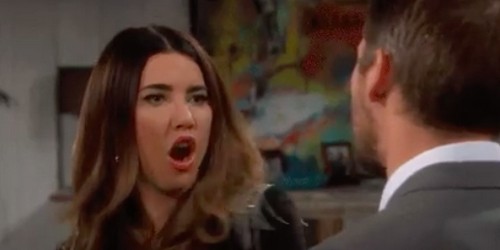 The sad part about that scene is that Liam seemed to fall in love with Steffy even more after she slapped him to the moon – he seemed to want her more, that is how domestic violence victims act, they see ‘hitting’ as love and it’s not! It is a vicious cycle. We tell women or men of abuse ‘if he hits you once he will do it again,’ does this mean Steffy is an abuser who will now abuse Wyatt [ Darrin Brooks]? Good luck with that! Steffy is no match for mama Quinn [Rena Sofer].

Has Steffy come off looking like a bully who thinks it’s ok to beat on men, or was it okay to put the hurt on Liam? Bell and The Bold and the Beautiful need to take a stance on such a serious subject or does Bell get to just pick and choose which PC issues are relevant to him – like transgender issues? Where will B&B go from here?

Wyatt and Steffy will get together all the while Liam will pine away for a woman that bitch-slapped him? Steffy would have never smacked Bill Spencer [Don Diamont] like that – she picked on the weak, meek Liam. Sorry but this storyline is very questionable and TPTB at B&B need to turn it around fast. Liam needs to move on with Ivy, someone who would have never thought twice about HITTING anyone.

As for where they are going with Steffy and Wyatt, the good news for Wyatt is that with Quinn as a mother nobody will be abusing him for long, enough said! Stay tuned as the never ending B&B love triangle sagas continue. The question is who are the particpants this week? What do you think CDL’rs do you think that slap was over the top and true domestic violence or was it okay to hit Liam because he is man and Steffy a woman? How will other B&B characters react to Steffy’s outburst of crude domestic violence? Do you want to see another Liam/Steffy love triangle, can you bear it? Please send us your thoughts in the CDL comments below.