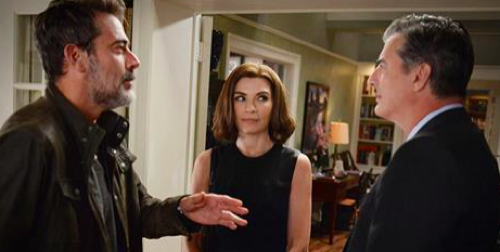 Tonight on CBS The Good Wife starring Julianna Margulies continues with an all new Sunday November 15, season 7 episode 7 called, “Driven” and we have your weekly recap below. On tonight’s episode, Alicia (Julianna Margulies) joins a case involving an automotive executive represented by Lockhart, Agos and Lee, and an employee represented by Louis Canning, (Michael J. Fox) who was involved in a crippling accident while test-driving a car operating in driverless mode.

On the last episode, Alicia and Lucca defended a client who was fired from a technology firm for failing a polygraph test. Meanwhile, Eli planned to leak something that would damage Peter’s presidential campaign but could also inadvertently hurt Alicia. Did you watch the last episode? If you missed it, we have a full and detailed recap right here for you.

On tonight’s episode as per the CBS synopsis, “Alicia joins a case involving an automotive executive represented by Lockhart, Agos and Lee, and an employee represented by Louis Canning, who was involved in a crippling accident while test-driving a car operating in driverless mode. Meanwhile, Peter moves back in with Alicia to present a united family image in order to woo a potential campaign contributor.”

Tonight’s season 7 episode 7 looks like it is going to be great and we’ll be updating it for you beginning 9:30 PM EST.

Tonight’s episode of “The Good Wife” kicks off with Louis Canning meeting with a client named Wendy, she is suing Tim Brewster – the driver of a car that crashed in to her. They are at a deposition – Tim Brewster is being represented by Diane and Cary. Tim argues that he wasn’t driving the car, it was in “driverless mode,” and the car malfunctioned and wouldn’t let him take control of the wheel and avoid hitting Wendy’s car. After the deposition, Louis corners Tim Brewster in the elevator and tells him that Diane Cary are “playing him” – Louis gives Tim Alicia’s business card and tells him to call her.

Meanwhile, Alicia is at her first Democratic Committee meeting – Frank Landau announces that it is time for a vote. Hallman wants to replace ballot machines from KLT with machines from a company named Swanson. Alicia doesn’t vote – and it’s a tie. Frank Landau forces her to vote, and she has no choice but to take his side. It’s super awkward at the committee meeting, and another member of the committee shouts that Frank Landau clearly “bought off” Alicia.
Alicia returns to her office – she bumps in to her private investigator as he is leaving and asks him to look in to a company named KLT and find out how Frank Landau is associated with them. Inside, Lucca is meeting with their new client Tim Brewster. Tim leaves and Lucca jokes that it is a three-way, between them, Louis, and Diane/Cary. Alicia receives a frantic phone call from Eli – apparently “The Vice” is reporting that her and Peter’s marriage is a sham and they don’t sleep in the same beg together.

The next day Alicia and Lucca head to the deposition with their new client Tim Brewster. Louis Canning is there with the victim Wendy. Diane/Cary are representing the owner of “T-Port”, the self-driving car, Mr. Ephraham. Ephraham is arguing that his employee Tim took the car without his permission, and if anyone should be sued – it is Tim because he had no reason to be out driving it.

Alicia invites Jason over for drinks later that night, they flirt awkwardly for a while and then she explains to him that she needs him to sign a waiver because she is trying to get her ducks in a row with the insurance company. Afterwards, Alicia convinces Jason to stay for dinner – then there is a knock at the door, it’s her husband Peter and a whole group of people. Apparently, Peter needs to fake sleep there while the tabloids are breathing down his back. Alicia introduces Peter to Jason and explains that he is just her private investigator.

At the campaign office, Eli receives a phone call from Alicia – and she is not a happy camper. He reassures her that Peter is only staying at her house for a few days. Then Eli rushes off the phone, he thinks that Ruth is sneaking around behind his back and has a woman named Courtney Paige in her office. HE sends Nora in to spy on them, and Nora rants that she has an MBA and she is done playing “I Love Lucy.” With him. Ruth knocks on the door with Courtney, apparently she is a powerful business mogul and wants to endorse Peter. Ruth and Eli invite Courtney to Grace’s birthday party to get to know the family, the only problem is – Grace’s birthday isn’t until March. Eli calls Alicia to let her know that they are going to have to fake Peter living at her house, and Grace’s birthday.

The next day, Alicia and Lucca head back to the deposition with Tim Brewster. Alicia reveals that Wendy sent a text message from her cell phone 20 seconds before the accident, which means that she was texting and driving and not watching where she was going. Jason reports back to Alicia – he went to download the hard-drive from the self-driving car to get information on the accident – and someone had erased it all right after Tim and Wendy’s crash. Alicia heads home, and Hallman is waiting for her – he officers to make her the new chair of the Democratic Committee – if she stop voting for Frank Landau and votes to pass the KLT voting machines.

The next day Alicia bumps in to Jason – she apologizes about kicking him out when Peter came over. Jason learned that Frank Landau’s wife owns a shell company called Pigster, and they own the KLT voting machines that Frank is trying to push through the Democratic Committee. In the deposition, things get strange – Cary brings in a witness named Dudewitz that is supposed to help his case. But, instead Dudewitz turns out to be a bit nutty, and he announces that he thinks the car has a a mind of its own, it hit Wendy on purpose, an then deleted its own hard-drive – because the “robots are taking over.”

Alicia heads home and Peter is there, they pour themselves a drink to celebrate their good days at work. Peter has been sleeping in the spare room – Alicia asks him if he wants to get laid, she has 20 minutes to spare. They head in to the bedroom and crank up the radio and get in bed. Alicia jokes that she seduced him, and she doesn’t need him to call her in the morning. Eli knocks on the door and is shocked when he realizes that they just had sex.

Alicia, Lucca, and Jason have Dudewitz take them out in a testdrive in one of the driverless cars. While they are retaking Tim’s route, Dudewitz has an epiphany. He says that the accident might not have been Tim’s fault or the car’s fault – a computer hacker may have taken over the cars computer and thought it would be funny to wreck them. Afterwards, Alicia rushes home for her dinner with Peter and Courtney Paige. While they are trying to Woo Courtney and convince her to invest in the campaign, Peter’s mom Jackie and Howard Lyman crash the dinner. Jackie informs Peter that she and Howard are engaged and they are in love and getting married. Peter is not happy..he tells Jackie that she is insane – right in front of Courtney Paige. It turns out that Courtney actually enjoys Jackie and Howard’s company, and she sits down with them for drinks.

Alicia and Lucca head back to the deposition, Dudewitz has bad news – he checks the car’s hard drive and was able to track the hacker back to one of Tim’s friends at the company. Apparently Tim’s friends thought that it would be funny for them to hack the car and scare him, they never met to crash it. So, seeing as how it was still Ephraham’s employees that caused the car accident (just not Tim) – he is still responsible for paying for it. So, Alicia and Lucca’s client is in the clear – Diane and Cary have lost the case.