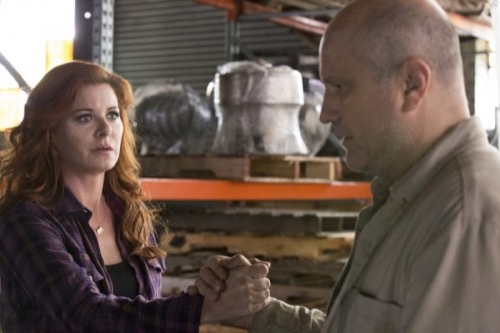 Tonight on NBC The Mysteries of Laura continues with an all new Wednesday October 14, season 2 episode 4 called, “The Mystery of the Convict Mentor” and we have your weekly recap below. On tonight’s episode two inmates flee prison and Laura’s (Debra Messing) team help look for them.

On the last episode, a technology whiz was killed in a supposedly secure building, and his valuable ideas were in danger of being stolen if the police didn’t solve the case quickly. Did you watch the last episode? If you missed it, we have a full and detailed recap right here for you.

On tonight’s episode as per the NBC synopsis, “two inmates flee prison and Laura’s team help look for them, but others doubt her team’s loyalties because one of the fugitives is their old captain.”

We will be blogging The Mysteries of Laura season 2 episode 4 with all the up-to-the-minute details at 8PM EST so make sure to come back to this spot and watch the show with us. Make sure to refresh often so you get the most current info! In the meantime, sound out in the comments and let us know what you think of this series.

Captain Dan Hauser was the captain of Laura’s squad before she arrested him and sent him to prison. But for some reason Hauser chose to call Laura out of the blue one day to pass on some information he learned at prison. So naturally Laura was weary of trusting him and she wasn’t sure if she should put herself out there for Hauser by obtaining a search warrant that was simply based off of his word.

So she did something else. Laura pulled a fast one on Santiani and convinced the other woman that her cramps were acting up. And after her little stunt got her pulled from active duty, she then talked Jake into coming with her to investigate her tip.

Hauser had told her that notorious mobster Thomas Mullens also known as The Irishman had stashed a couple of bodies in the basement of an old warehouse. So Laura had to see if the bodies were Sarah Price and Gary West. Those two disappeared after they stole ten million dollars in unmarked currency but Laura hadn’t believed they would run away just like that.

Sarah had a husband and two daughters. Now leaving the husband would have been something that Laura understood, but the daughters as well, didn’t make sense. If anything Laura believes Sarah would have taken her daughters with her when she ran. So Sarah’s case has always bothered her.

And thanks to Hauser, she can finally put her doubts to rest. Laura and Jake did find the partners in crime and unfortunately both of them were dead. Just like Laura predicted. Though Laura knew she couldn’t tell anyone about the bodies right away.

So she had talk Jake into going along with her plan. He wanted to report the bodies to Santiani and that was a risk Laura couldn’t afford to take. Not when it was going to alert Mullens to a leak and possibly put Hauser’s life in jeopardy.

But protecting Hauser wasn’t that big on Jake’s list of priorities. So Laura had to do more than talk. She also had to pull the “trust” card. She told Jake that he didn’t have to trust Hauser. All he had to do was trust her.

Although trusting her only led to trouble. Laura had gotten Jake to back down but later on in the day they both heard about the inmate escape at Wakefield Correctional. The same one Hauser and Thomas Mullens were in. Though that wasn’t a mere coincidence.

Hauser and Mullens were actually two of the escapees!

However Laura doesn’t think Hauser seriously wanted to break out of prison. She just thinks he’s going along with Mullens as a way to redeem himself. So she was trying to figure out his plan when she went by the prison to inspect his cell.

She thought he must have left clues behind but Jake had a very different opinion. He thinks Hauser used Laura and so did their captain. Santiani had later dragged Laura into her office so that Laura could have a chance to explain her actions. Such as buying the same power drill that was used to break out Hauser. And if she was the “woman cop” that Hauser talked about while he was in prison.

So Laura tried to clarify what happened and tell Santiani that Hauser was technically on their side yet Santiani didn’t want to hear it. She immediately benched Laura and forbid her from continuing on with the case. And so Laura shouldn’t have been allowed to hear the going-on but luckily no one tends to listen to Santiani when she speaks.

Max still passed on information and Jake was willing to ignore his boss when Laura asked him to. So he used the luminal like she advised and found the clue that Hauser honestly left behind. Hauser had written the word “Charlie” in his blood and Laura knew it meant the Charlie sector in Manhattan. Which covered up a few notable blocks that happen to belong mostly to Mullen.

In fact the bodies of Sarah and Gary were found in that area. So Laura knew where to search or at least she thought she did before Hauser left her another clue. That time the clue was leading the police across town though again it was one of Mullens’s warehouses.

So as she was running across town, Laura filled Jake and the rest of her squad in. Mullens had been the one to arrange the heist back in the day and he had stashed the money in his old warhouse. And Max on his end found out that warehouse was about to be demolished because of the damage from Hurricane Sandy.

Therefore the reason Mullens broke out of prison was because he wanted to get to the money while he still could.

But Jake had asked Laura not to follow the lead until she got back up and naturally she ignored him. She entered the building and found Mullens with a gun to Hauser’s head. So Laura then attempted to talk him down but she didn’t want to risk Hauser getting caught in the crossfire.

So Billy had to take the shot. Neither Laura nor Mullens saw him entered the building but he did and he even pushed Meredith so she wouldn’t get hurt.

Meredith though wasn’t happy about that. Their dating now but she doesn’t want him to forget she’s still capable in the field. And as for Hauser, he didn’t do all that he did in order to make a deal. He just wanted to find a way to apologize to Laura for what he did to her. So they ended up having a heartfelt goodbye

He was her captain and now her last memory of him doesn’t have to be him shooting at her.