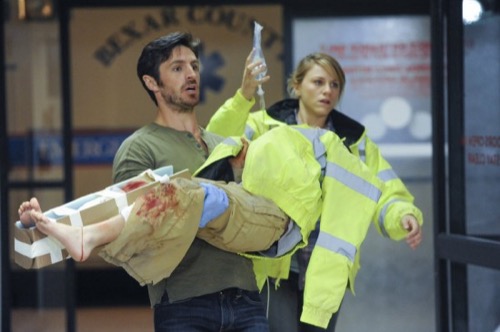 Tonight on NBC their new drama The Night Shift airs with an all new Monday, February 23 season 2 episode 1 premiere episode called “Recovery,” and we have your recap below. On tonight’s episode, Topher [Ken Leung] takes over as chief of the night shift in the season 2 opener.

On tonight’s episode as per the NBC synopsis, “Topher takes over as chief of the night shift in the Season 2 opener. Also: TC is temporarily suspended; Jordan is scrutinized for her mishandling of the man who shot a recovered Topher; a father is trapped under an elevator; Ragosa returns to the ER.”

Will The Night Shift be another huge hit for NBC? Tune in tonight at 10PM EST and let us know what you think. We’ll be recapping all of the action right here for you. Will you be checking out the action? Hit up the comments and let us know your thoughts!

Tonight’s episode of The Night Shift kicks off at the hospital with Dr. Cummings getting paged over the loudspeaker, he picks up the nearest phone and it is a prank – his ear gets covered in some white cream. A man and a woman that were in a motorcycle accident are wheeled in to the emergency room – Jordan rushes to work on them. The husband and wife have a crow bar through both of their necks and they are connected side by side. Cummings is busy so Dr. Chavez arrives to work on them. The wife is heavily sedated but the husband Craig is awake. The new night surgeon Chavez rubs some of the nurses the wrong way with his laidback attitude.

Callahan arrives at the emergency room with a young boy that he rescued in the desert, he gets to work on him and Topher reminds him that he is still technically suspended. Ragosa arrives in the operating room and Chavez briefs him on the husband and wife with a bar through their neck. They are trying to figure out how to cut the bar without killing them, Ragosa kicks Jordan out of the room and says that they don’t need her. While they are contemplating where to cut the bar, the wife Mary begins having a seizure. They are running out of time, Chavez grabs the saw and begins cutting the bar between the two of them.

TC is leaving the hospital room and runs in to Jordan and Gwen. TC tries to have a chat with Jordan in private, but Paul interrupts them and can’t take a hint. When Paul finally leaves, Topher interrupts and needs Jordan’s help with paperwork. Gwen corners TC and threatens him about hurting Jordan again. In the operating room Chavez successfully separates Craig from his wife Mary.

An emergency call comes in, there is a man at the court house that was crushed by an elevator – Jordan, TC, and Gwen rush to the scene. They are shocked when they arrive and see that the man’s entire body is inside the elevator shaft and pinned under the elevator. The man is fading fast, Jordan and TC stabilize him while they start cranking the elevator up to free him. Suddenly his chest begins bleeding out – everyone panics, Jordan shouts for them to put the elevator back down on his chest.

Jordan, TC, and Gwen are faced with a huge decision – if they leave the man in the elevator shaft he will die, but if they pick him up out of the elevator he will die as well. They have to do an arterial bypass, Jordan calls and gets permission from Raguso and Scott arrives on the scene. He freaks out when he sees TC there, and shouts that Jordan is making a horrible decision and they can’t perform a heart bypass in an elevator shaft. TC and Jordan reason with Scott and get him on board. He shouts at an EMT to bring him bags of ice and other supplies.

Paul and Drew are looking at TC’s partner Trisha – she says that she has back pain and needs to pass a physical so that she can reenlist in the army. While Drew is examining her she starts coughing up blood, she admits that it has happened a few times before. Scott and Jordan come rushing in to the ER with the man that was trapped under the elevator – they managed to extract him and keep him alive until they got to the hospital. Scott and Chavez get to work on the man’s heart immediately. Topher and Drew put Trisha through for an MRI – TC rushes in to see what is going on and they find a Stage 2 tumor in her lung. Trisha is baffled, she cries that she has never smoked before.
The head of the hospital arrives on the night shift and is screaming at Ragosa for okaying the bypass in the elevator. He rants that he had no business doing that in the field, and it is going to cost the hospital a fortune. Ragosa snaps back that he wanted to do one good thing at the hospital before he quit, because he is tired of pushing paper in a place where everyone hates him. He survived a tumor, and he refuses to spend the rest of his life miserable at his job. He announces that he is quitting and storms out of the hospital.

Trisha doesn’t have any insurance nor any money, Topher, TC, and Drew argue over how they can help Trisha. Technically her tumor is only at stage 2 so the doctors won’t consider it an emergency. Topher announces he is going to check her in anyways and try to talk to the surgeon, he thinks that he may be able to persuade the doctor to do the surgery. Topher talks to the doctor, and he learns that he can’t do the surgery pro bono because his schedule is full of free surgeries and he is only allowed to do so many per month. He tells Topher and TC that he will do the surgery for half price though, they need to come up with $15,000.

Craig and his wife Mary are both out of surgery. They wheel Mary’s husband in to see her and he begins to wake up – but he can no longer speak English. Apparently the bar that went through his skull damaged his brain and he can only speak his native language – Korean. The neurosurgeon explains that he is going to have to relearn the entire English language. Krista downloads an app on her tablet to translate Korean so that Mary and his wife can talk to each other. In the waiting room TC lies and tells Trisha that the doctor agreed to do her surgery for free, apparently he must have paid the $15,000. Out in the lobby the night shift is playing a prank on Drew, they trick him in to standing next to a pole and then they wrap him in plastic wrap so that they he can’t get free.

Topher finds Ragosa in the in the lounge having a meltdown, he can’t believe that he quit his job instead of waiting to be fired – now he doesn’t get any of his benefits or severance package. He is scared he made a huge mistake. Ragosa confesses that he has been studying to take the boards so that he can be a doctor. Topher reassures him that everything is going to be okay, he takes him to the elevator victim’s room to show him that the man survived all because he okayed the dangerous surgery. Topher offers him a position at the hospital as medical assistant – it will be a major cut in pay though, but will be the next step he wants to take if he wants to be a doctor.