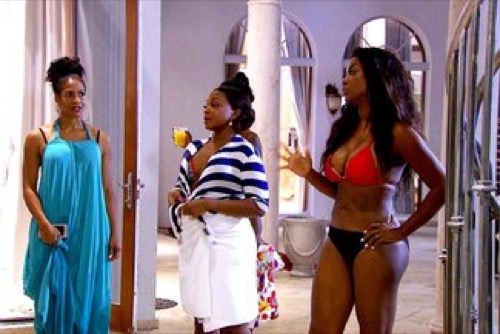 Tonight on Bravo The Real Housewives of Atlanta continues with an all new Sunday December 20, season 8 episode 7 called, “Miami Spice,” and we have your recap below. On tonight’s episode the ladies continue living La Vida Loca in Miami, but trouble arrives in paradise when a guest of the house takes the drama to new heights, causing tensions to rise. Porsha Williams takes time away from the ladies for a steamy date with a hot new suitor.

On the last episode, an unlikely pair, Kenya and Porsha join forces to plan a girls trip to Miami as a “re-do” for the disaster that came out of their last outing. Porsha takes the fun getaway to the next level by renting a yacht for all the ladies to enjoy a day out on the water. Did you watch the last episode? If you missed it, we have a full and detailed recap right here for you.

On tonight’s episode per the Bravo synopsis, “The ladies continue living La Vida Loca in Miami, but trouble arrives in paradise when a guest of the house takes the drama to new heights, causing tensions to rise. Porsha takes time away from the ladies for a steamy date with a hot new suitor.

After the dust settles, two of the women decide to trek back to Atlanta, leaving a small crew behind to enjoy the Florida sun. Kim’s apprehension about Kenya is pushed to the limits, forcing her to reconsider her decision about continuing this newfound friendship.”

The ladies had all been enjoying themselves on their night out when it was suggested that they take the party back home.

However things with Tammy’s nephew quickly went downhill. Glen had initially showed up some attitude while he had been on the boat with the girls and they had dismissed it because even Kenya acknowledge that she had been in the wrong to snap her fingers at him but Glen just did not let up. He refused to accept her apology for the sake of having fun. So Kenya thought maybe he was spicy.

And Kenya had flirted with him. But Glenn had attitude and it simply didn’t go away. He got into Kandi’s face back at the house because he assumed she had an attitude with him even though all she did was answer his question with no interest whatsoever. Which is to be expected of a married and pregnant woman.

Yet Glen somehow took offence and then started to say he didn’t want anything to do with her anyways. And besides Kandi, Glen also got aggressive with Kenya again. He got on her about saying his aunt was lurking nearby. Then began talking about how none of these hoes were going to tell him anything.

Until eventually the Jacuzzi nearly emptied out and he had only Sheree and his friend as company. So Glen did have a problem and Kenya had asked his aunt to get him to leave. But she should have let Tammy did with him on her own.

Tammy had gotten both men practically to the door when Kenya just had to say something. She told Glen that he was acting weird and that he was being aggressive. And when she told him that she wanted him to leave, he began to approach her and Kenya then had to call for security.

Glen was aggressive and, rather than walk away, he chose to push his aunt out of the way. And he ignored her while she laid unconscious on the floor because he wanted to fight the security team. So there was a problem with him and Kenya shouldn’t have said something else but Glen disrespected his aunt more than anyone else.

And therefore it was surprising when she came back to the house with him in tow. Kenya and Cynthia had gone to bed by then but the other ladies were up.

They were actually talking about Tammy and Glen when the two showed up with their same friend as before. And so the ladies had been on edge. Not only did Tammy seem to be in the same daze as the children of the corn but no one could recall pressing the gate open.

So later both Kandi and Kenya had a laugh about that. They figured the trio must have jumped the fence and also wondered why Tammy would come back with those two. That situation didn’t make a lot of sense.

And when everything was said and done, the house party was short two members. Kandi couldn’t stick around because she was pregnant and had to think about the best interest of her baby. While Kim was dying to go home from day one.

The fact Kim managed to stay until the fight between Glen and the security team was over is saying something. Because, really, Kim wasn’t meant for this type of crowd. She can’t take the partying mood plus she keeps winding into some argument with Kenya.

So, when the ladies got back from Miami, Kim had wanted to discuss with Kenya the project that they were supposed to be working on together. Kim later told Kenya that she felt the entire situation at the house had been the result of being provoked. And Kenya disagreed.

However, they didn’t get into an argument about it and chose to agree to disagree. And left things at that.

But the one thing that everyone can pretty much agree on is that Porsha getting flirt on with the Venezuelan was the highlight of the trip.