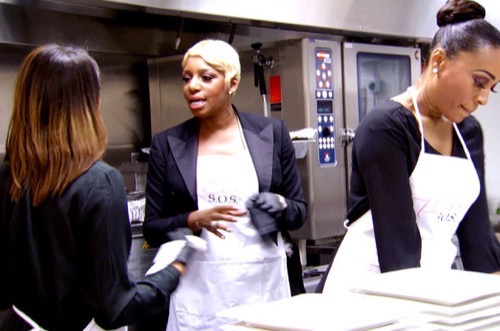 Tonight on Bravo, The Real Housewives of Atlanta continues with an all new Sunday April 12, season 7 episode 21 called “Chasing Nay-Nay” and we have your weekly recap, spoilers and synopsis below. On tonight’s episode, the ladies return to Atlanta from the Philippines and immediately get back to work. Kenya Moore is in the midst of shooting her pilot, Life Twirls On, as Cynthia Bailey strives to perfect her accent for the role as a Jamaican salon owner.

On the last episode In New York, NeNe had a costume fitting for her Broadway debut. In the Philippines, the ladies were reminded of the fun they have together. To everyone’s surprise, Phaedra and Kenya came together in a discussion that changed the dynamics of the group. Did you watch the last episode? If you missed it, we have a full and detailed recap right here for you.

On tonight’s episode as per the Bravo synopsis, “The ladies return to Atlanta from the Philippines and immediately get back to work. Kenya is in the midst of shooting her pilot, Life Twirls On, as Cynthia strives to perfect her accent for the role as a Jamaican salon owner. Meanwhile, Kandi and Todd attempt to go on a romantic date, but Todd drops a bomb that leaves Kandi torn. Phaedra continues to feel the rippling effect of Apollo’s absence and is inspired to throw a charity event. Things take a turn when NeNe makes a cameo from New York and exchanges words with Claudia.”

NeNe and Gregg go to the New York City restaurant Sardi’s with NeNe’s son.
She is nervous because the opening night of Cinderella is around the corner.

Kandi is getting ready for a date with Todd, and is equipped with sex toys from her own company. The couple are trying to add spice back into their relationship. Kandi says their relationship has been a lot better since their meeting with the counselor, but they need to improve things in the bedroom.

Kandi hasn’t seen Todd since she went on vacation. When her daughter sees the dress she’s going to wear to the date, she says it has too much cleavage and asks her if she can cover up.

Phaedra tells her assistant about the Philippines trip and the guide she met. She says she wants to do a men’s rally that will encourage black boys and men to be good men and fathers.

Kandi and Todd go on their date. When Kandi asks what she did to deserve this wonderful evening, Todd says he’s trying to do his homework. Kandi says the distance in their relationship has made things tense.

She asks Todd if he still wants a baby. He says his show got greenlit for a second season, so it will be another block of time when he won’t be around. He says he won’t be able to be there every day with the way his schedule is and the way it’s going to be. He tells Kandi he’s going to have to leave in another month and a half.

Kandi says she thinks they shouldn’t go two weeks without seeing eachother, and he tells her she should do some work in LA. She says she already has a child, whom she can’t leave. Todd says if it were a movie, she’d do it, and tells her to figure it out.

Cynthia tells Peter about the trip and Phaedra inviting them to her men’s rally.

She asks him to help her with her Jamaican accent for Kenya’s pilot. She reads him lines off the script, which he then reads back with the accent and she repeats.

Phaedra holds her “Save Our Sons” rally.

Porsha tells Claudia and Cynthia that NeNe is on the way.  NeNe says in confessional that she is not interested in talking to the women at all, and that she is just there to support Phaedra’s event and then go right back to New York City.

NeNe says she still thinks it was phony, and that it wasn’t right for everyone to point fingers at her when everyone has their own issues in life.

Cynthia continues to talk about the therapy session, and NeNe says they both have said and done things that have been very negative and very messy.

Claudia lists all the places that NeNe has walked out of, and NeNe says she’s not her friend so she doesn’t care about where she walks out of. She says she is at this event trying to be positive and they are being negative.

She storms out, and Kenya restrains Claudia from following her.

NeNe gets Gregg and leaves the building, tells Phaedra she is about to leave the event, saying she didn’t fly this far for that and every time she tries to do something positive, people bring negativity.

Meanwhile, Claudia is in the kitchen saying she doesn’t care if NeNe is doing Cinderella for two weeks, saying it’s like new money.

Cohen asks about NeNe storming out of Dr. Jeff’s therapy session, asking if the session really did become an attack on NeNe. Porsha says she was probably the only one in the room who felt like it was. She says she thinks

On the fight between NeNe and Claudia: Porsha says she thinks both of them were being comedians at the time and it wasn’t that serious. Phaedra agrees.

Cohen asks if they agreed with people who said the Philippines trip would not have been as fun if NeNe were there: Phaedra disagrees with that, saying it was really unfair to say that. NeNe has been part of the group for a very long time, and knows how to fit in with the group.

On NeNe’s various hairstyles throughout the season: Porsha says she thought they were fun, and there were probably some she liked and some she didn’t, but that’s just something women do.

A viewer asks Phaedra if she has decided to take her boys to see Apollo. Phaedra says if that were here business, she would tell her.
Cohen asks how the boys are doing and if they know where their dad is.
He asks her how her relationship with Kandi is, and she says it’s fine.

Porsha confirms that she is single.

A viewer asks Porsha how she feels about Claudia taking photos with her ex. She says she was just a little bit confused because the other girls were cheering her on when previously people were saying he was a beard. She says she hasn’t talked to him since before she signed the divorce papers.

Cohen asks Phaedra how she felt when she saw Apollo spreading the rumor about Mr. Chocolate. She says it was disturbing because it wasn’t true, but people do crazy stuff when they’re having marital problems.

Phaedra says she was proud of NeNe for being able to come to her men’s rally and not engage in foolery, instead focusing on positive things.

A viewer asks the women what they think of Kenya’s pilot.
“We haven’t watched it yet, have we?” Porsha says.

A viewer asks her what the status of her current divorce is, and she says there is no divorce and she is still married.

The poll question of the day is “Do you think the truce between Phaedra and Kendra will last?”

Phaedra says she thought they were all good, but wait until the reunion to see what really happens.