The Real Housewives of Beverly Hills Recap 3/17/15: Season 5 Episode 18 “Confessions of a Housewife” 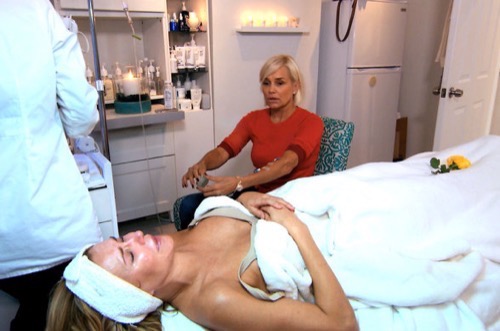 The Real Housewives of Beverly Hills returns to Bravo tonight with all new Tuesday March 17, season 5 episode 18 called, “Confessions of a Housewife,” and we have your weekly recap below. On tonight’s episode, Lisa Vanderpump refuses to accept Brandi Glanville’s apology for slapping her the night before. After a final dinner in Amsterdam, which Brandi skips for a date with a 24-year-old, the women return home. Brandi gets bad news about her father’s health.

On the last episode, with tensions still high, the ladies started day three in Amsterdam by splitting into two groups to explore the city. Eileen confronted Lisa Rinna about Lisa’s failure to support her in front of Kim. Later, at dinner on a riverboat, all the unresolved issues came to a head. The night climaxes with Brandi playfully slapping Lisa, but for Ms. Vanderpump it’s no game. Did you watch the last episode? If you missed it, we have a full and detailed recap right here for you.

On tonight’s episode as per the Bravo synopsis, “Lisa Vanderpump refuses to accept Brandi’s apology for slapping her the night before. After a final dinner in Amsterdam, which Brandi skips for a date with a 24-year-old, the women return home. Brandi gets bad news about her father’s health. Kyle is shocked when Lisa Rinna tells her that Brandi has talked about Kim needing an intervention. Later, in Palm Springs, Kyle angrily reveals to Kim what her “best friend” Brandi has been saying behind her back.”

Brandi had slapped Lisa Vanderpump and then she honestly thought flowers was going to be enough to get the other woman to forgive her. But on tonight’s all new episode of “The Real Housewives of Beverly Hills”, Lisa seems to apparently have had enough. The slap was a breaking point for her and so now she feels like she’s done with Brandi.

Because this is just how Brandi is. She doesn’t think before she acts and Lisa is kind of tired of making excuses for her.

Even Yolanda, Brandi’s biggest supporter, thinks Brandi went too far this last time but the only one that doesn’t see it is Brandi. She did what she did when she thought they were playing around. And when Lisa appeared offended, she apologized.

However, now Brandi is upset that Lisa hasn’t accepted her apology. And she also doesn’t want to be on the receiving end of a mom lecture from Yolanda. So she’s decided to skip the dinner they had all planed later that night in order to be with the new guy she met in Amsterdam. According to her, if everyone at the dinner was going to be at upset at her then she had no reason to attend.

Yet, she fails to question why so many people are angry at her. That maybe just maybe her attitude had something to do with why everyone was on edge around her.

And, funnily enough, the environment was lighter at the dinner she missed out on. All the other ladies were secretly more relaxed. Though that didn’t stop Brandi from being the occasional topic of discussion.

Lisa for one was clearly rattled about Brandi going on a date with her son’s friend. She thought it was wildly inappropriate and she hated the idea that it might come back to her son Max. Lisa didn’t want him to get any sort of tidbits from his friend Andre that he might end up wishing to share with her.

Otherwise, though, the dinner in Amsterdam was better without Brandi. The girls had fun and no one randomly gotten into an argument. Unfortunately, however, that same spirit of merely enjoying themselves was gone when they returned home.

Brandi’s father was ill and that put her in a very vulnerable state. She was crying easily and for her to do that in front of others made Yolanda ease up on the whole take responsibility talk. In the end, she just wanted to support her friend through tough time.

But you know who else was going through a tough time – Kim and Kyle. Apparently, they haven’t spoken to each other since they came back from the trip and neither of them wants to be the first to approach each other. Kyle it seems was still angry about the way Kim reacted to Lisa and on her end Kim was hurt when Kyle automatically took Lisa’s side in the argument.

So Kyle talked it out with Lisa. She told her friend that she was going to ask her sister to come away with her for a few days in order for them to finally get the chance to without constantly being interrupted. And Lisa, in an usually gossiping mood, told Kyle what Brandi had been saying about Kim. According to Lisa, Brandi is just as concerned about Kim’s sobriety as everyone else so Kyle felt Kim should know that.

And later when her sister met up with her in the desert, she first tried to make cordial conversation with her sister but when they began arguing – she threw the Brandi story right in her face. Kim had wanted to know why Kyle wasn’t defending her like Brandi was and so Kyle told her Brandi had approached Lisa about doing an intervention.

But Kim didn’t believe her. And then they stopped talking about Brandi and began fighting about their mother’s house.

So nothing was resolved between them. Once they started to rehash old fights and argue about Brandi – they lost their way. And although they both want to have a better relationship with each other – Kyle no longer thinks they’re capable of it.