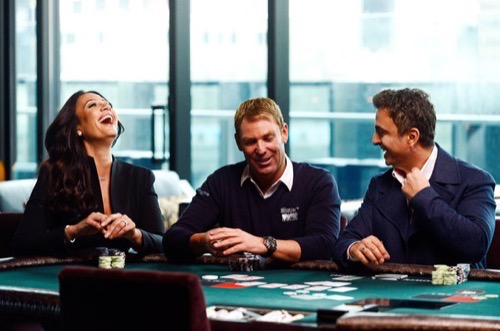 The Real Housewives of Melbourne returns to Bravo tonight with all new Thursday March 19, season 2 episode 3 called, “Fashion Flare Up” and we have your weekly recap below. On tonight’s episode, as Jackie and Ben get creative on their latest marketing pitch for La Mascara, Chyka’s bubbly daughter Chessie and Janet’s witty BFF Manuela are introduced to the rest of the ladies.

On the last episode, Gamble hosted her first event for the ladies, a Murder Mystery Party. Despite the “witches” theme, it was a fun, glamorous night that culminated in a big announcement from Gamble, but Janet and Chyka were quick to overshadow Gamble’s news with their own revelations. Did you watch the last episode? If you missed it, we have a full and detailed recap right here for you.

On tonight’s episode as per the Bravo synopsis, “As Jackie and Ben get creative on their latest marketing pitch for La Mascara, Chyka’s bubbly daughter Chessie and Janet’s witty BFF Manuela are introduced to the rest of the ladies. Mounting tensions between Janet and Gamble reach a crescendo as the ladies attempt to enjoy a fashion event at Chadstone.”

Chyka and Lydia meet at a restaurant. Lydia is going to Florence for her son’s wedding, and she’s nervous. Chyka tells Lydia about the rumors surrounding Gamble that she was a stripper and had been involved in sex parties, rumors which Janet had confronted her with. Lydia says she’s surprised to hear a piece of gossip from Chyka.

Jackie films an ad for her makeup brand. She is scolded, particularly by Ben, for pronouncing the name wrong.  Janet and Jackie talk about the fight with Gamble, which Janet says is Chyka’s fault because she brought up the subject in the first place.
Jackie encourages her to invite Gamble to her event, and Janet decides to do it as she hasn’t done anything wrong.

Gamble has been invited to a fashion parade. Janet and Chyka are trying to call her, but she doesn’t care because she doesn’t want to talk to anyone who will mess with her life.

Pettifleur and her friend Charlotte, who does her eyebrows, drink tea together.

Janet goes to the Icons of Style Fashion Show with Jackie. Gamble arrives, and she “couldn’t be angrier.” When she greets the two women, she immediately admits she doesn’t like the other woman and tells her she thinks she made up the rumors about her. Janet asks why she would make that up, and Gamble says “tell me.” Janet says she told Gamble that she heard rumors. Jackie tells Gamble to get whoever is saying this in front of her face, and Gamble says Janet is the one saying it. Gamble turns to Janet and accuses her of selling her body for heroin, telling her not to mess with her because she did her research. (She says in confessional that she made it up.)

Gina arrives to find both women upset. Gamble tells Gina her side of the story. Gina tells Janet she thinks Gamble is annoyed because she was flirting with her fiance.

Janet says that she heard the rumors from Chyka.

During the fashion show, Gina tells Gamble that Janet admits to flirting with her fiance. Gamble says she doesn’t care about that, but being called a whore is another story.

Gina talks to Janet, bringing up the idea that she is trying to get people to dislike her, which Janet says is ridiculous.

Gamble says she wants to seek legal advice due to Janet defaming her, and Jackie says she doesn’t think Janet has tried to defame her.

Lydia’s friend Shane has asked her to be an ambassador for his foundation. They are hosting a poker evening, so Lydia is learning how to play.

Gamble goes to Rick and tells him about the rumors. He says that she knows that isn’t true and the more attention she pays it, the more the rumors seem true.

Chyka’s daughter Chessie is back from traveling and she is enlisting her to help her clean her huge closet.

Janet meets up with her friend Manuela, who knows everyone in Melbourne. She tells Manuela about how Gamble got angry when she and Chyka told her about the rumors going around about her. Manuela says she had also heard rumors about Gamble. When Janet asks her what Gamble does, Manuela says she told her she was going to go into real estate. Janet says Gamble told her she did pilates two hours a day.

Gina and Gamble meet for dinner because Gamble is upset about recent events and is looking for clarity. Gamble says she thinks Janet has it out for her. Gina asks her if she’s ever been a call girl, stripper and pole dancer, and Gamble says no. Gina says when she talked to Janet, Janet said she heard the rumors from Chyka. Gamble says she made some phone calls at lunch to get dirt on Janet because she was feeling vengeful.

Gina tells her not to get caught up in it and to try to stick to the facts in order to avoid stooping to her level. She tells Gamble that she thinks Janet is jealous of her. She says she is so disappointed in Janet and that she made all that up just to bring her down. Gina tells Gamble to confront Janet, and then asks Gamble if she would like her to do it herself.