The Real Housewives of New York Premiere Recap: Season 7 “The B Is Back” 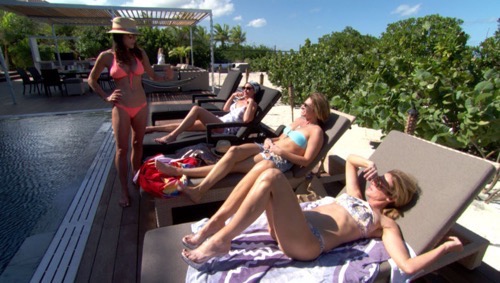 The Real Housewives of New York returns to Bravo tonight with all new Tuesday April 7, season 7 premiere called, “The B Is Back,” and we have your weekly recap below. On tonight’s episode, It’s transition time for many of the women as Bethenny Frankel is still dealing with the chaos of her divorce and with no place to call home, she is trying to find where she belongs.

For those of you who don’t know, the show is a fast-paced reality show that follows several incredibly busy and ambitious Manhattan women. Watch as they balance envious social calendars, challenging careers, and motherhood, with the hustle and bustle of the big city all around.

On tonight’s episode as per the Bravo synopsis, “It’s transition time for many of the women as Bethenny is still dealing with the chaos of her divorce and with no place to call home, she is trying to find where she belongs. Excited about a fresh start of her own, Luann plans a weekend at her new home in the Hamptons and invites all of the ladies to join. Ramona is coping with her separation from Mario and attempting to move on with her new life as a single lady. Meanwhile, Carole feels the pressure from her book publisher to make a deadline and new housewife Dorinda is living two separate lives – one includes her boyfriend John and the other includes her 21-year-old daughter Hannah.”

Bethenny’s old Tribeca apartment is now being occupied by her ex, so she is staying in the presidential suite of a hotel. She has a new apartment, but she needs to renovate it.

She says in confessional that she is glad her talk show is over, because she didn’t really enjoy doing it. She has recently come out with two books, one a children’s book and the other a cocktail book. She is temporarily running her business empire from her suite.

LuAnn tells her friends about her progress of moving into her new apartment in the Hamptons. She says Ramona is invited to her housewarming party, which means Sonja will come. She says she didn’t want to leave Sonja out even though they aren’t on the best terms.

LuAnn and Bethenny catch up.  LuAnn asks Bethenny if she and her ex are friends, and she says no, although that’s what she had hoped for. Bethenny asks LuAnn who she has been hanging out with.

Ramona and Sonja meet up after not hanging out nearly as much as usual for a while. Sonja asks Ramona how she is, and she says it feels like her world has fallen apart. She says it almost feels surreal, and she thinks she was in denial for a while. She says it was the most bizarre thing that ever happened to her. However, she says she did have years of a great marriage, which a lot of people don’t have. She say she is pouring her energy into Avery.

Sonja asks Ramona what she thinks about her going to LuAnn’s housewarming party, saying she’s trepidatious because of the drama with the group. She says Ramona should defend her when they are attacking her, but Ramona says she has enough going on in her own life.

Carole meets with her editor. When asked where her next manuscript it, she says she has been asked to write a television pilot based on her book.

She says she needs an extension for her second book, because she isn’t going to make her deadline. She says when she writes, she isolates, and she doesn’t feel like doing that right now.

Her editor says her own ass is on the line, saying she will giver her a schedule that she must keep and that if she fails to meet deadline, it’s a legal problem.

Ramona and Dorinda meet up. Ramona tells her about her lunch meeting with Sonja, and how she and her husband realized after 25 years that their relationship just wasn’t working. She says her husband told her the problems were her fault because he didn’t like the way she was treating him. She says Sonja didn’t give her support and was being narcissistic. She says that he told her and Avery that he didn’t like his life, and Avery asked if she and Ramona weren’t his life.

Dorinda’s daughter is taking some time off college in the aftermath of Richard’s death. She doesn’t like Dorinda’s new beau.

Sonja is stressed out about the press regarding her lawsuit, saying most of the people reading the press don’t understand it. She doesn’t feel like she’s getting enough support from the girls, saying in confessional that she is done telling them things.
She also says the others don’t believe her about her fashion business, but they are going to eat crow when they see what she has been working on.

Bethenny searches for a new office space. In the car, Bethenny talks about realizing she is running out of time to have another baby, as well as lacking stability or a place to live for the daughter she already has.

She is traumatized after being homeless for two years while her ex, who is now a stranger to her, lives in her apartment.