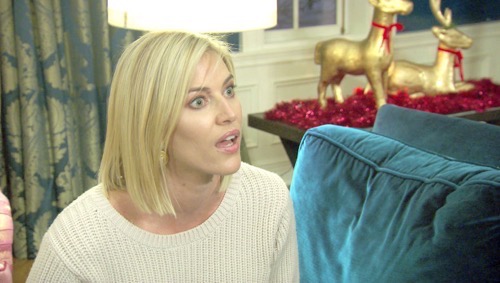 The Real Housewives of New York returns to Bravo tonight with all new Tuesday June 9, season 7 episode 10 called, “Pop of Crazy,” and we have your weekly recap below. On tonight’s episode, Dorinda Medley’s birthday dinner comes to an unappetizing halt with Bethenny Frankel and Heather Thompson in a screaming match, capping off a conflict-filled Berkshire weekend. Back in New York, Ramona is thrilled to have Avery home so they can reconnect, and Avery surprises Ramona with her adult perspective on the situation between her parents.

On the last episode, the ladies headed to the Berkshires to celebrate Dorinda’s 50th birthday and were impressed with Dorinda’s luxurious estate. In the evening, Kristen mentioned to Ramona and Dorinda that John was too touchy with her at World Bar, setting Dorinda off. During dinner at a local inn, the women discussed Bethenny’s very rough childhood and the walls she had up, but Heather wasn’t feeling very sympathetic. On the night of Dorinda’s big 50th birthday dinner, all of the boyfriends and husbands descend upon the house and one surprise guest arrived just in time–Bethenny. When Bethenny revealed she didn’t eat fish, Heather took it upon herself to fix the situation, which didn’t end well for either woman. Did you watch the last episode? If you missed it, we have a full and detailed recap right here for you.

On tonight’s episode as per the Bravo synopsis, “Dorinda’s birthday dinner comes to an unappetizing halt with Bethenny and Heather in a screaming match, capping off a conflict-filled Berkshire weekend. Back in New York, Ramona is thrilled to have Avery home so they can reconnect, and Avery surprises Ramona with her adult perspective on the situation between her parents. It’s all business when Bethenny invites Sonja to her brand summit meeting to give Sonja some insight into what it takes to run a successful brand, while Kristen invites Carole to contribute some color and branding ideas for her new nail polish line. Later at Ramona’s party at her new sports bar, AOA, most of the attention of the night is on Bethenny as she navigates conflicts with Luann, Kristen and Heather.”

Heather and Bethenny step away from the dinner table and talk. Bethenny tells Heather that she doesn’t want attention after all of the things she’s been through in the public eye. She tells Heather she wants to get to know her after apologizing. Heather tells her not to apologize and to feel better. They go back to the dinner table, and when LuAnn and Heather start to talk, Bethenny tells them not to discuss it right then when it just happened and she is right there at the table.

LuAnn stands up and makes a toast to Dorinda. She tells John that he is a lucky guy. She begins to talk about how nice he is, and everyone bursts out into laughter.

Ramona gives a toast to Dorinda. She says what she loves about Dorinda is that she’s genuine, and says that she has never loved the Berkshires this much.

Bethenny makes a toast to the party, and makes a crack about Sonja Morgan being the most sane person in the room proving it’s a real party. Heather gets butthurt over Bethenny’s toast, sarcastically saying in confessional that that is a good way for Bethenny not to draw attention to herself.

When everyone disperses after dinner, Bethenny talks to Sonja and LuAnn, telling them about how she saw LuAnn and Heather talking about her right in front of her face. Meanwhile, Heather talks to Kristen and Dorinda, complaining about Bethenny’s personality.

Bethenny holds a brand summit for Skinny Girl. She is bringing Sonja in order to help her with her own business.
Sonja says in confessional that although all of the other women in the group say they’re concerned about her business practices, no one has ever invited her to anything like this.

Ramona asks Avery if her father has told her that he has been trying to reconcile with her lately. Avery says she doesn’t ask too many questions and that she’d rather stay out of it. In confessional, Ramona says that ideally she would like to get back together with Mario.

Ramona asks her daughter how she feels about the possibility of the two of them getting back together, and she says that she should do what she wants and what will make her happy. She says overall Mario has been a good husband and dad for the last 20 years.

Ramona tells Avery that her biggest concern is Mario is not a very happy person.

Kristen has a deal to create a nail polish line for beauty shop Ricky’s NYC. She brings Carole to the meeting to help come up with polish names. She suggests names like ‘Thrust’ and ‘Slide,’ but Kristen wants names like ‘Date Night.’

Ramona and Bethenny meet up at a steakhouse, and Ramona is already creeping on young men by the time Bethenny arrives. Bethenny says that Ramona is like “a bitch in heat.”

Dorinda and Carole arrive while Bethenny talks about how Heather was up her ass at Dorinda’s dinner in the Berkshires. Carole says Heather is nurturing and wanted to give her good advice. Bethenny says she understands that Heather is Carole’s best friend and she wants to defend her, and she respects that but she doesn’t want to hear it.

Ramona says she’s bringing guys around for her for her upcoming party at her new sports bar. Ramona holds her sports bar party with her thirsty business partner, Peter. Ramona says in confessional that she’s surprised how well she and Bethenny are connecting. She says they are similar in that they both have a wall that they put up, but now that she’s letting down her wall, Bethenny is doing the same.

Heather comes into the party and gives Bethenny the cold shoulder.

Ramona says to Bethenny that when she first met Heather, she felt her eyes were saying one thing and her mouth another.

Kristen talks to Carole about how she feels boxed out, mentioning that Ramona and Bethenny are off in their own corner talking. Carole tells Kristen that she saw Bethenny the other day and she said something to the effect of ‘You know, Kristen doesn’t even own a trademark for ‘Pop of Color’ [the name of Kristen’s nail polish line].’ She says that she told Bethenny that perhaps she has the trademarked for nail polish, and Bethenny said Kristen is “dumb.”

Carole tells Kristen that she’s trying to shed light on why Bethenny is so standoffish, but in confessional she says that she knows she made a mistake telling Kristen about it.

LuAnn says she was worried about Bethenny because she started crying at the dinner party. Bethenny asks LuAnn if she asked Heather why she broke down into tears. LuAnn says Heather was crying because she was just trying to help.

Bethenny tells LuAnn that she is pretending to be nurturing, but she isn’t. She tells her not to deliver things in pretty packages if they aren’t pretty. Kristen tries to interrupt, and LuAnn immediately shuts her down. Kristen says she had something to say but can come back in a couple of minutes, and storms off. Ramona then comes in and offers the women chicken.

Bethenny goes and grabs Kristen to talk. Kristen says she feels like they haven’t really connected at all, and that in every situation she gets boxed out. She tells Bethenny that she is “really, really really passionate” about her nail polish line. She then brings up the “dumb” remark, asking Bethenny what that was all about. She says she felt really flattered that Bethenny took the time to Google her company, and before she is able to continue, Bethenny storms off. Kristen follows her, asking her repeatedly why she is walking away.  “She doesn’t give two shits about me,” Kristen says in confessional. “That’s really what it comes down to.”

Bethenny goes to Heather, and says she hates that the incident at the dinner party happened. Heather says Bethenny has a wall up, and she can’t get to know someone with a wall up. Bethenny apologizes, and Heather accepts her apology. Bethenny says she knows she is harsh and abrasive, which isn’t how she has always been and isn’t how she will always be. They hug and make up, then Bethenny leaves the party.

Kristen whines to some guy about how she had been impressed by Bethenny’s success and thought she may be able to get help or advice. ‘So much for friends,’ she says.