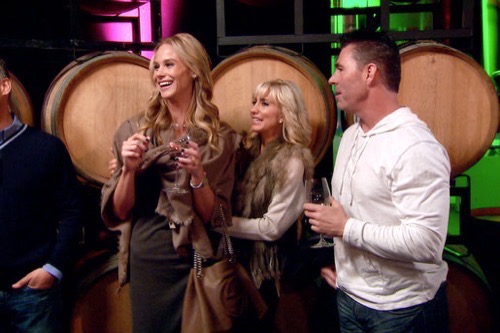 The Real Housewives of Orange County returns to Bravo tonight with an all new Monday June 22 season 10 episode 3 called, “Whine Country,” We’ve got your recap down below! On tonight’s episode, Heather Dubrow and the ladies travel to Napa to celebrate the launch of her new sparkling wine Collette. OC transplant Meghan King Edmonds is excited for her first trip to wine country, but is also apprehensive after her recent run-in with Shannon Beador.

On the last episode Shannon and David were pushed to new limits as they finished up the last day of their couples retreat. Meanwhile, having returned from Puerto Vallarta, Vicki threw a Fiesta party where a piñata wasn’t the only thing that’s bashed. At the party, when Heather introduced her friend Meghan to the group, Shannon realized that she had a history with Meghan. Plus, Vicki and Tamra’s shaky friendship became even more complicated as the two came face-to-face after having avoided each other for the past six months.

On tonight’s episode per say the Bravo synopsis “Heather and the ladies travel to Napa to celebrate the launch of her new sparkling wine Collette. OC transplant Meghan is excited for her first trip to wine country, but is also apprehensive after her recent run-in with Shannon. Shannon continues to struggle with her emotions regarding her husband David’s affair. Also, Tamra reveals her newfound relationship with the lord while also trying to draw some much needed attention to her new boobs.”

Tonight’s episode of Real Housewives of Orange County kicks off with Meghan meeting up with Heather and Tamra for drinks. Meghan reveals that she has moved 7 times already, and they just sold their house and she is going to have to move again. Tamra changes the subject and talks about running in to Lizzy, she can’t believe how nice she was – after all of the drama last season. She thinks that Shannon was being stand-offish. Meghan reveals that she met Shannon’s husband before at Heather’s hoe-down, and Shannon thinks that she was flirting with him. Afterwards, Meghan called Shannon to try and organize a charity dinner and Shannon acted like she had no idea who she was.

Meanwhile, Vicki is getting ready to travel to Florida to receive an award acknowledging her as a top producer in the insurance industry. She is busy trying to pick out a dress for the ceremony – she is excited to be acknowledged for her hard work. Shannon is at her house helping her pick out clothes. Shannon says that while Vicki is gone she is going on a trip to Napa with Heather and Tamra.

Heather has arranged for a private jet to take the girls to Napa, their husbands are all meeting them there later because of their work schedules. Heather, Lizzie, Tamra, Shannon, and Meghan all meet up at the airport to catch their jet to Napa. On the jet, Meghan surprises the girls – she has painted wine glasses for all of them. Tamra reveals on the jet that she started going to church, she says that she “has been saved” and if anyone doesn’t like it then “they can suck it.”

Heather and her husband have gone into business and started their own line of champagne. She and the girls arrive at Bello Vineyards in Napa where they are having a launch party for the champagne. Heather does a walkthrough of the house where they will be holding the party, to make sure that it is being set up properly. Heather tries not to be a control freak – but she wants to make sure that everything is set up perfectly. Meanwhile, the rest of the girls arrive at the hotel – which looks like the White House.

Everyone gets ready for the party in their rooms, and they are all waiting outside for Shannon and David. Shannon and David arrive in the golf cart, and then they drive right past their friends like they don’t see them – apparently they are having a huge fight. David arrived late, and Shannon is irritated because he is acting like he did when she found out about his affair. Heather tells everyone that they need to leave, they are running late. As they are getting in the car, Shannon and David show up at the last minute, she lies and tells Heather that she was having “wardrobe issues.”

They finally all make it to the launch party and begin mingling. Shannon is annoyed because she wants to find a bar with real drinks at the party – not just Heather’s new champagne. Tamra agrees to help Shannon find the bar that is supposed to be at the party – she and David are still bickering over nothing. Tamra complains about how fancy the party is, even the cake is fake, it’s not edible.

Tamra and Heather decide to sit down and call Vicki to see how her award ceremony is going. They think that it is weird that they are all together without her there. Afterwards Heather takes Terry aside and tells him that she has bad news, she talked to the contractor that is working on their house and they have gone over budget $135,000.

Meanwhile, Tamra is drunk and comes out of the bedroom with toilet paper hanging out of her dress. Meghan takes Shannon aside and wants to talk to her about the hoedown last year. Shannon insists that she wasn’t mad at Meghan for talking to David, she was mad that David was ignoring her and acting like she didn’t exist. Heather gives a speech at her launch party and thanks everyone for coming, and then they all pose for photos.

The next morning, the housewives and their husbands meet up for breakfast and they had to a winery in Napa for a tour and tasting. Then they all head back to their rooms and get dressed for a night out on the town. They arrive at a dinner party at the Bello house. Heather is thrilled because the Bellos are handling all of the arrangements for their trip to Napa and she gets to actually enjoy the party instead of plan it.

At the party, Meghan takes Shannon aside. She wants to know why when she called her about the charity event she pretended that she didn’t know her. Meghan reminds Shannon that she called her about the charity party – and she felt offended. Shannon explains that she thought it was a sales call, and she was distracted by her kids in the car. Shannon rants that she doesn’t like people giving out her personal number and then sneers that she “starts charities” and she doesn’t appreciate Meghan implying that she is uncharitable – she storms off leaving Meghan bewildered, everyone at the party watches the altercation and is baffled by what is going on.