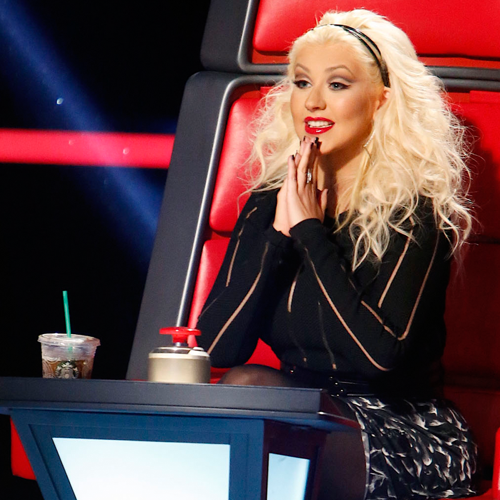 Tonight on NBC the Emmy award winning music competition The Voice returns with an all new Monday March 10, season 8 episode 6 called, “The Battles Premiere, part 2,” and we have your weekly recap below. On tonight’s episode, the battles premiere continues.
In the last episode of The Voice, the blind auditions concluded and the battle round began. Did you watch the last season finale? If you missed it, we have a full and detailed recap right here for you.

On tonight’s episode as per the NBC synopsis, “The “battle rounds” continue and the coaches enlist the help of the music industry’s top recording artists to offer their knowledge and skills as advisers. Adam Levine teams up with Ellie Goulding, Blake Shelton with Meghan Trainor, Christina Aguilera with Nick Jonas and Pharrell Williams with Lionel Richie. In this phase, the coaches pit two of their own team members against each other in a dueling duet. After the vocal face-off, each coach must choose which artist from their team is the strongest, and has the option of stealing losing artists from an opposing coach. Each coach has two steals during the battle rounds where their artists will proceed to the knockout rounds. Carson Daly hosts.”

Tonight’s Live season 8 episode 6 is going to be exciting. We’ll be blogging it right here for you. In the meantime hit up the comments section and tell us how excited you are for season 8 of The Voice.

The #VoiceBattles start now. Pharrell is first up tonight with his battle round pairing of Anthony Riley versus Travis Ewing. Both are excited to meet Lionel Richie and be mentored by him. They are doing The Temptations’ Get Ready. Anthony has been singing the song since he started singing on the streets but Travis is ready to bring it and compete head to head. Lionel gives them some notes and says Anthony needs to not keep tinkering with it. Pharrell tells Travis to push his voice past the breaking point. They give them extra notes when they work with the band.

They both sing hard and Anthony throws in a “get ready Travis” as an in your face challenge. Adam says the song was Anthony’s wheelhouse but says Travis put up a great fight. Blake says Anthony could be in The Temptations. Blake says Travis made it a true battle and would go for Travis. Christina says they brought high energy and it was fun to watch. She picks Anthony. Pharrell says they both did a great job and really listened to their notes. He chooses Anthony for the win.

Travis thanks Pharrell then Blake slaps his button for the steal. Blake says it was a sink or swim moment and he was swimming for his life. He says he’s home now and offers Travis a big hug. Christina is up next and she has Nick Jonas mentoring with her. They talk about their shared Disney background. First up for Christina’s battle bouts is Ameera Delandro versus Sonic. They are doing Jessie J’s Masterpiece. Nick advises them on the chorus and says they need to be more dynamic.

Sonic is struggling to some extent because of her partial deafness. It’s causing her problems with the band sound while trying to harmonize with Ameera. They get lots of notes from both Nick and Christina as well as some homework. They come out for their battle and absolutely kill it. For my money, Sonic outrocked her. Pharrell tells Ameera she was a little pitchy here and there but was fighting hard. Adam says it was like out of the Matrix and they were hovering in the air.

Adam says the song was perfect and says he would go with Sonic but says Ameera has so much potential. Blake says they both have awesome singer hair. Christina says she’d like to see their hair on Blake’s head. Blake says Ameera has a whispery cool tone but Sonic has a pocket she can bounce around in. He says he would also pick Sonic. Christina chooses Sonic for the win.

Next up is Blake with Meghan Trainor. She tries to get Blake to stop singing Lips are Moving because he’s dancing terrible. His first battle tonight is Hannah Kirby versus Sarah Potenza. Blake says they are his bad ass rock chicks so he has them singing Rolling Stones rock classic Gimme Shelter. Blake says Hannah nearly blew his hair piece off. He tells Hannah that she needs to use her range to compete with Sarah’s power chops. They rehearse with the band and get last minute notes from Meghan and Blake.

Meghan tells Sarah she needs to be careful not to come across like she’s yelling at the audience and encourages Hannah to move around more. Blake says the winner will be the one who can use the most control. Meghan asks Blake how he can choose one of them and sleep at night. He says he drinks instead of sleeping. The battle begins. They both sing their faces off. They feed off each other well. It’s like watching the Wilson Sisters or something. Amazing!

Christina says it blew her socks off. She says she expected that from Sarah but had no idea Hannah could do that. She applauds them some more. Pharrell says he loved it and says it was the best duel. He says Hannah was incredible and says when she ran over and faced off. He says Hannah proved she’s afraid of no one. Adam says – damn. Then he says Sarah blew them away but says Hannah is tough and Pharrell says Hannah swung her purse like a Southern church lady.

Adam says shame on the mentors for expecting a murder and says he gives it to Hannah. Blake says Sarah really tamed the beast and kept in control and Hannah used her range just like he told her to. Blake says the winner is Sarah. She’s surprised then hugs Hannah. Blake says it’s the best battle he’s ever been part of but went with Sarah because she’s so different. Adam and Pharrell both press their buttons to steal Hannah before Carson can even complete his sentence.

Adam says he thought she won it and she should consider that when she picks her new coach and says he can take her far. He says now Pharrell is going to be super charming. Pharrell says he’s ready to listen to her and won’t try to change her but wants the opportunity to work with someone like her. Blake says that was good. Now it’s done to Hannah and Christina tells her to go with her heart. She goes with Pharrell. She says she felt a spiritual connection with him.

Next up is a battle for Adam of Blaze Johnson versus Michael Leier. They are excited to see Ellie Goulding. Michael says she’s an artist that you immediately know who she is when you hear her on the radio. He has them doing Rude by Magic. Adam coaches Michael to control his voice and tells Blake to back off the island vibe and sing like himself. Ellie says the song is better for Blaze but says Michael has something incredible. Blaze says Michael’s voice is like a boxing glove that just hits you.

Ellie tells Michael to be warm. Adam says Michael has some pocket problems. Adam coaches Blaze on breath issues but says they sound good together. He says they are both rushing a little and need to sing it laid back. Now it’s time for the battle. The guys come out and do their thing. Michael’s voice is really cool but Blaze absolutely killed it. Blake says they did Adam proud. Christina says it was interesting and says she could feel some angst and wished they would have relaxed into it.

Pharrell says that echoes his thoughts too that it was a bit more intense. He says she felt like Blaze opened up more personally. Adam says he sees an upward trajectory with both of them. Adam says they did everything he asked of them. He chooses Blaze as the winner. Next up for Blake is Cody Wickline versus Matt Snook. They meet with Blake and Meghan. They’re doing How Country Feels by Randy House. They give them some notes then move onto the band performance.

Meghan asks Cody what he keeps looking at past her. She asks the guys if they really want to play the guitars and asks them to try it without them. They get their final notes and then it’s time for the battle. It’s hat versus hat and it’s cowboy. Christina says she likes how country feels. Blake tells Cody that Christina likes the smile. She says Matt had a lot of heart and had good energy. She says Cody’s execution is clear. Pharrell says Cody has a rebellious side that comes through.

He says Matt sings his story whenever he opens his mouth. Adam says this song could swallow you up but says if he’s judging just on vocals, he thinks Matt won it. Blake says they both did a good job and then says Cody came out of his shell and had fun. He says his singing was perfect. Blake says Matt’s energy is infectious. He congratulates them both then chooses as his winner – Cody.

The night’s last battle is for Team Pharrell and it’s Meghan Linsey versus Paul Pfau. He’s got Lionel Ritchie mentoring for the battles. Pharrell says he put them together because they both experiment with different genres. He assigns them Don’t Let Me Down by The Beatles. He says he feels like it’s the 50 yard line between them. Lionel tells them to think about the story not how many ways you can hit the notes. They give them notes before the band rehearsal.

Pharrell tells Meghan she has to engage and use her eyes. He says she can’t be scared. Paul has to move the note down and Pharrell worries he’s conceding too much. Lionel says she has a great voice but has to make eye contact or it’s over. They do their battle and it’s just gorgeous. She’s making her eye contact and he’s going great. She has a very Joplin sound and he has a Dylan-esque thing going. Adam says he really wanted Paul and Meghan turned him down.

Adam says Meghan has power in her voice but says Paul was great too. Blake says it was great and says Paul is really capable. He tells Meghan she sounds better than ever and tells Pharrell not to pick Meghan. Christina says Paul is such an individual and it’s hard to sing against a powerhouse like her. She says she’d go with Meghan. Pharrell says she put her eyes to work and says he chooses Paul for the win. Blake and Adam both want to steal Meghan. The battle is on. Christina tags in as well.

Blake tells Meghan that he beat Adam bad last year and Adam reminds her that Blake didn’t even turn around after he asked. Then he asks Christina if she remembers when they both turned around for Meghan but Blake didn’t. She says she did. Meghan says it’s a hard choice then decides to go with Blake who is overjoyed.