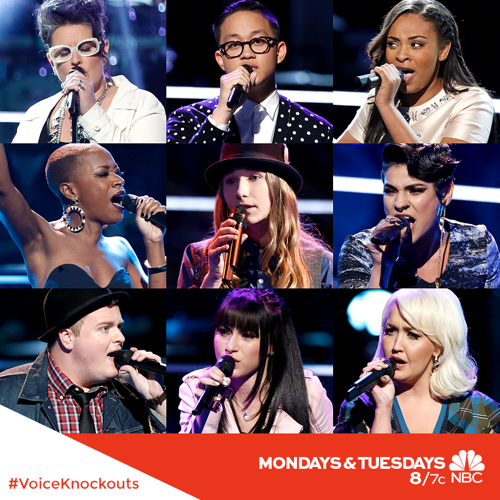 Tonight on NBC the Emmy award winning music competition The Voice returns with an all new Tuesday March 24, season 8 episode 10 called, “The Knockouts Premiere, Part 2” and we have your weekly recap below. On tonight’s episode, the knockout round continues.

In the last episode of The Voice, the “knockout rounds” began with coaches Adam Levine, Blake Shelton, Christina Aguilera and Pharrell Williams’ strongest team members remaining from the battle rounds. The artists were paired against a teammate once more, but this time they selected their own song to perform individually, while their direct competitor watched and waited. A renowned key advisor was on hand to work with all of the coaches and their teams as they prepared the artists for this challenge. The coaches alone chose the winner from their team to move on to the live shows and the artist not selected were available to be stolen by another coach. Did you watch the last episode? If you missed it, we have a full and detailed recap right here for you.

On tonight’s episode per the NBC synopsis, “the “knockout rounds” continue with coaches Adam Levine, Blake Shelton, Christina Aguilera and Pharrell Williams’ strongest team members remaining from the battle rounds. The artists will be paired against a teammate once more, but this time they will each select their own song to perform individually, while their direct competitor watches and waits. Music phenomenon Nate Ruess [fun.] will serve as a key adviser and be on hand to work with all of the coaches and their teams as they prepare the artists for this challenge. The coaches alone will choose the winner from their team to move on to the live shows and the artist not selected will be available to be stolen by another coach.”

Tonight’s Live season 8 episode 10 is going to be exciting. We’ll be blogging it right here for you. In the meantime hit up the comments section and tell us how excited you are for season 8 of The Voice.

The #VoiceKnockouts are back with six more facing off. Christina and Blake are the only coaches with a steal left. First up is Team Black with Cody Wickline versus Corey Kent White. Corey meets with Nate Ruess and says he’s going to sing Tim McGraw’s Live Like You’re Dying. Nate and Blake are both impressed but give him some notes on his breathing and pitch. Cody has his hat off! I didn’t know what was under that thing. He’s still cute. He sings Justin Moore’s Til My Last Day. The crowd is grooving and clapping. Corey is next and he hits some bigs notes and has Adam and Pharrell on their feet.

Christina tells Corey he had so much heart and says Cody was really strong and they’re both solid. Pharrell says he didn’t know Cody had that much soul and says Corey had a great stage presence. Pharrell says he thinks either could win. Adam says he thinks Corey won it but is also a huge fan of Cody. Blake says Cody’s sound is special and they don’t have enough of today on the radio. He tells Corey he’s never heard that kind of passion. Blake says now he has the worst job in picking a winner. He chooses Corey who is crying and grateful. Cody says he’s grown from the experience.

Nate and Adam goof around singing Rocket Man. Then Adam has Blaze Johnson versus Deanna Johnson. It’s a Johnson v Johnson. He’s singing You Found Me by The Fray. Blaze says not a lot of guys that look like him sing that kind of music and says Nate is an inspiration. He sings then Nate tells him to try and control his pitch. He tells him to use a mic stand to change the vibe. Adam says to channel Eddie Vedder and how he busts things out while standing still. Deanna comes in and says she’s doing Listen to Your Heart by Roxette. They tell her to let loose. Nate says she has so much potential.

It’s knockout time. Blaze belts out his song in a big way. The crowd loves it. Then it’s Deanna’s turn and she is pretty amazing. It’s a lovely and different take on the song and her voice is just so different and has so many layers. Wow! Blaze hugs her when she’s done. Blake says it’s Johnson & Johnson. He says he has to say how breathtakingly beautiful… then says – that Blaze is. Everyone laughs. Blake says he would give it to Blaze even though his voice broke but she had pitch issues.

Christina says Deanna has a signature voice and says she thinks it’s a toss up. Pharrell says Deanna has a beautiful tone but she lets her nerves get to her. He says he would give it to Blaze because he’s more prepared to move forward. Adam says Blaze’s lower register is unbeatable and says great job. Then Adam says he thinks Deanna doesn’t sing as well when she’s on stage and says her lack of confidence is her obstacle. Adam says they’re waiting on Deanna’s breakthrough while Blaze is ready. He says the winner is Deanna.

Blaze does not get stolen but he says he’s just thankful and grateful. Blake says he didn’t steal him because he has his eye on someone else coming later in the knockouts that he hopes he can get. Team Pharrell is next with Caitlin Caporale and Hannah Kirby. Hannah has chosen Higher Love by Steve Winwood and, unfortunately, dances like Elaine from Seinfeld. The song is good though. Caitlin has chosen Warrior by Demi Lovato. Hannah is first and when she gets to singing and dancing, Adam tells Pharrell she’s crazy and he can’t let go of her. The crowd goes wild when she’s done.

Caitlyn is next and she absolutely slays it. Adam tells them they are both amazing but different and that sucks for Pharrell. Adam says his gut is Hannah. Blake says nothing was wrong with Caitlyn’s and says she showed more range in her song but says Hannah is so fun to watch because it’s like something takes over her. Adam says it’s like the scene from Beetlejuice. Christina tells Caitlyn it was a strong performance and then Hannah has all this power that comes over and she has an entertaining presence. Pharrell says Caitlyn goes inward and Hannah lives on the outside and lets her feelings out.

Pharrell says this is really tough but he chooses Caitlyn. He says she’s consistent and they have more work to do together. Hannah tells Pharrell she liked working with him and then Blake slaps the button to steal her. Pharrell had stolen her from Blake then he steals her back. Blake says he’s so happy to have her back where she belongs. That leaves only one steal and it’s in Christina’s hands. Adam reenacts the scene from Beetlejuice. It’s lovely.