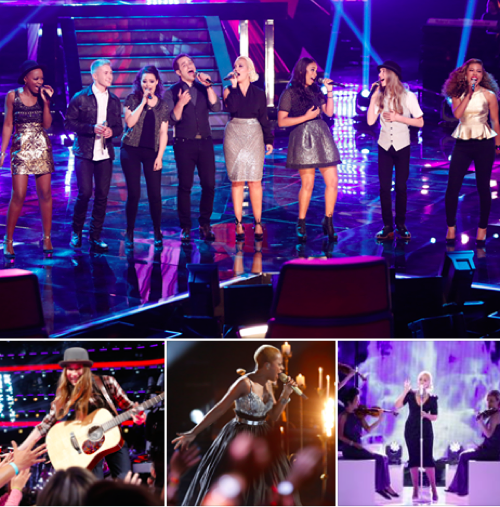 Tonight on NBC the Emmy award winning music competition The Voice returns with an all new Tuesday April 28, season 8 episode 21 called, “Live Top 8 Eliminations” and we have your weekly recap below. On tonight’s episode, two artists are eliminated.

On the last episode of The Voice, the top 8 performed. All four coaches were on their feet for one of the contestants before she hit the last note, she commanded the stage with the power of her voice. Did you watch the last episode? If you missed it, we have a full and detailed recap right here for you.

On tonight’s episode per the NBC synopsis “America will vote to eliminate two artists and the remaining six will continue in the competition. Adam Levine, Blake Shelton, Christina Aguilera and Pharrell Williams serve as coaches and Carson Daly (“TODAY Show”) hosts.”

Tonight’s Live season 8 episode 21 is going to be exciting. We’ll be blogging it right here for you. In the meantime hit up the comments section and tell us how excited you are for season 8 of The Voice.

On the #VoiceResults they start with a quick look at last night’s epic top 8 performances. Adam says it was some of the best performances of the season. The votes are in and the bottom three can sing for a shot at an instant save to be part of the top 6. First up is India Carney, Kimberly Nichole singing with special guest Jason Derulo. They do Want to Want Me. The crowd loves it. Nicely done.

Carson calls out the top eight to reveal the first part of the results. Carson says the first artist America saved was Joshua Davis from Team Adam. Blake has a red nose on to promote the NBC initiative. Blake says he thinks his team did everything they could to move forward. Christina says the performances have been transformative.

Pharrell says he’s super proud of Sawyer and Koryn then talks about how great The Voice band is. Adam has one guy left and he says their strategy is to explore what Joshua wants to do and says it’s all subtlety and nuance and says he loves Joshua. Next up is Rozzi Crane who sings Psycho. She was just touring with Adam Levine’s band Maroon 5. It’s a pretty cool performance.

Carson calls out the seven artists still in question to reveal the next one who is safe. It’s Sawyer Fredericks from Team Pharrell. He goes to hug his coach and that means both Adam and Pharrell are assured a spot in the next stage. Statistically, Blake will also be represented since he has three artists and only two (at the most) can be sent packing. Christina is the only question mark at this point.

The finalists go to an elementary school to help do a beautification project. They’re painting and Joshua says he’s glad to be giving back. Sawyer is excited to do the work and perform. The principal introduces the top 8 to the kids and they do a performance. They do Happy and the kids go nuts. Gwen Stefani and Pharrell show up at the school as well. The kids go even crazier.

Pharrell says they have a nice surprise for the school and they show it’s a really nice set of brand new musical instruments. Carson calls out the remaining six to announce the next artist that’s safe. From Team Blake, Meghan Linsey is safe and in the top six. Blake rushes to hug her.

The next guest performer is country artist Lee Brice singing Drinking Class with Corey Kent White. They do a great job and the crowd cheers like mad. Then Carson brings out the last five to reveal the last two saves and the three that will have to perform for the live save. From Team Christina, Limberly Nichole is safe. That puts all four coaches into the next stage of The Voice.

Also safe from Team Pharrell is Koryn Hawthorne. That means Hannah, Corey and India have to sing to vie for the live save. Pharrell has two in the next stage assured and the other judges on each. To try and win the save, Hannah is singing Radioactive by Imagine Dragons. As usual, she kills it – her voice just booms. Love her! The crowd loves it.

The crowd won’t stop cheering and Blake says he could brag about many things with her but says the most important thing about being an artist is being different and says no one else on this show or stage has been cut from a different cloth like Hannah is. He says it’s her singing and performance style. He says that goes for music as well and he tells people to take note and vote for the save for her.

Corey sings Someone Like You by Keith Urban (the guy who’s a judge on the other singing reality show…). Corey does a solid country performance as always. He’s a good looking kid who can really sing, so I kind of hope he doesn’t get the save – he’ll get a country contract no matter what. Blake says it’s hard to keep all three of a team together. He says if you love country, to vote for Corey.

Last up is India who does Human by Christina Perri. India’s problem seems to be that she can sing the phone book and sound great but is not a distinctive artist. Little Sawyer knows 100% who he is as do Megan and Hannah. Corey is a country boy through and through. Kimberly is a soulful maven but India is, at this point, simply very talented. And that’s likely not enough. Not yet, anyway.

Her song is very nice and the crows applauds nicely. Christina says to the audience to not let her go and says India needs to be there and they need to see what’s yet to come with her. She says India is flawless and captivating (agreed) and she says India has worked hard (no denying it) but we’re back to she’s just formless at this point. She needs to pick a musical horse and ride it.

It’s almost time for the voting announcement and it looks like Hannah is lagging far behind and Corey is in the lead. Blake tells them all that when they go home, they’ll have something to go back to because they’ve started their careers there on The Voice stage. He congratulates them all. Carson announces that the instant save went to India Carney in what Carson says was the closest vote ever (boo!)