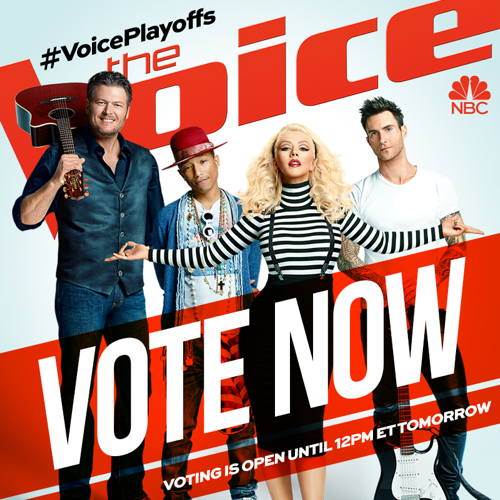 Tonight on NBC the Emmy award winning music competition The Voice returns with an all new Tuesday April 7, season 8 episode 15 called, “The Live Playoffs, Part 2” and we have your weekly recap below. On tonight’s episode, the playoff round continues.

On the last episode of The Voice, the remaining artists performed in front of coaches Adam Levine, Blake Shelton, Christina Aguilera and Pharrell Williams for their chance at a spot in the Live Shows. Did you watch the last episode? If you missed it, we have a full and detailed recap right here for you.

On tonight’s episode as per the NBC synopsis “the playoff round continues with its second part as the remaining 20 artists perform in front of coaches dam Levine, Blake Shelton, Christina Aguilera and Pharrell Williams for a spot in the live shows!”

Tonight’s Live season 8 episode 15 is going to be exciting. We’ll be blogging it right here for you. In the meantime hit up the comments section and tell us how excited you are for season 8 of The Voice.

Tonight’s episode of The Voice kicks off with host Carson Daly taking the stage, he introduces The Voice coaches: Blake Shelton, Christina Aguilera, Pharrell Williams, and Adam Levine. Tonight is day #2 of the playoffs, Team Adam and Team Christina will be performing for America’s votes and fighting to get in to the Top 12. Before The Voice contestants begin their performances tonight – award winning singer Sia makes a special guest appearance and performs her hit “Elastic Heart.”

Team Adam’s first performer of the night is Tanya Boyd Cannon, she takes The Voice stage and sings a rendition of Elton John’s classic “Take Me To The Pilot.” After Tanya is done singing Blake kicks off the critiques with, “There are two kinds of people we see up here, it scares a lot of people, but you are one of those people that embrace this moment. You are singing like you sing in the shower, the audience felt it and we felt it. It was great!” Christina agrees, “That’s a really good point that Blake has, it’s so refreshing seeing someone up on stage being free and living in the moment. I thoroughly enjoyed it, I loved seeing you smile and enjoy the song.” Pharrell comments, “You took America on a trip, if you have never been in in Church before then you just seen what happened. It was magical the way you got everyone’s spirit moving. I’m so glad to be on a show that allows this kind of talent to be seen.” Tanya’s coach Adam says, “Tanya is the confidence builder because she is unafrain and she is bold, like everyone said she takes this moment and embraces it. The number one thing I tell everyone on my team is ‘Do what Tanya does.’”

Team Adam’s next singer to take the stage is Joshua Davis, he performs “Budapest.” After Joshua’s performance Blake critiques, “Great job singing along with an audience who has the worst timing I have ever heard. There is just something about your voice, it was a dumb thing for me to let Joshua go. But, as much as I hate to say it you are with the right guy now.” Christina comments, “I just have to say your voice is so soothing. You’re so comforting. Your kids must love to hear you sing lullabies. It was really nice.” Pharrell agrees, “There is something about your tone that makes us all inquisitive. It makes me interested in your feature, what you have just done.” Joshua’s coach Adam says, “There is something soothing about your voice, it is a great quality to have. Seriously this is just the beginning for you. I am just so proud and happy to have you on my team.”

Up next is Team Christina’s singer Sonic, she performs Mary J. Blige’s hit “I’m Going Down” on The Voice stage. Pharrell kicks off the critiques with, “That was such a cool little journey, and I loved the confidence. I felt like you pulled it through it was a great performance.” Adam agrees, “This is a huge lesson for everyone to learn when you perform live – you got to find it. It’s very easy to get lost there and you came back.” Blake comments, “It’s almost not even worth talking about because her attack coming back was so powerful. All of a sudden you just dug in and it was like drawing blood out of the note.” Christina comments, “It’s so important to just feel a song, and I felt that from you. I was listening to your story, and you are such an inspiration for so many girls out there and it is hard. Man, you got them amped and that is amazing – you did a phenomenal job.”

Team Adam’s next singer to take the stage is Brian Johnson, he performs a rendition of “At This Moment” by Billy And The Beaters. Blake critiques, “Gosh man you just keep getting better every time you get on the stage, it brought me right back to “Family Ties.” I don’t know what else to say, you are a perfect vocalist.” Christina agrees, “It was just so sweet, I saw you pour so much emotion in to that. It was so sweet, I loved it.” Pharrell comments, “It’s true, it is always an amazing thing to see someone express themselves and everyone in the room to just get it. You hit so many notes gracefully, it wasn’t forced.” Brian’s coach Adam comments, “I got to say something man, the greatest thing about you is I know you would love to win The Voice – but what is more important to this guy is to sing and entertain people with his amazing voice. That is what he is the most interested in. That is why I absolutely love you and I am a big believer in you.”

Team Christina’s singer Kimberly Nicole hits The Voice stage next and performs Linda Perry’s hit song “What’s Going On?” Kimberly gets a standing ovation from The Voice judges, Pharrell comments “Perfection! Perfection because of the incredible depth of soul you have, your voice is very similar to an electric guitar. That was perfection. America should be voting for you right now!” Adam agrees, “That was crazy, I was telling Christina that I love this song and I am so happy that you were doing it. That is a really hard song to sing and she just destroyed it. You were so in control, you even controlled that stiff ass dress that you are wearing. It was amazing.” Blake agrees, “I know I am just on the sidelines tonight, just watching this competition go down – because of you Team Christina just pulled out ahead and lapped Team Adam.” Christina comments, “I love this girl, you are such an amazing unique person and I am so happy you had this moment. Thank the universe and thank Linda Perry for blessing you with this song.”

Team Christina’s next singer to take the stage is Lexi Davila, she performs a rendition of Celine Dion’s hit “All By Myself.” Adam Levine comments, “I am so proud of you, first of all. Normally I would say I am so stupid that I left you for Christina, but every once in a while on this show you have this realization that you belong here and I couldn’t be any more happy for you.” Blake comments, “The song was going good, but then when it came to the next level and you took it there – Adam’s team is now three laps behind. I am loving watching this right now.” Christina comments, “I am your biggest fan. Tonight you just made me so so happy. To be a coach and to watch you on this journey, I saw you loosen up and discover new sides of yourself. But, my god, I know how nerve racking it is to have a big note coming up and you nailed it.”

Up next is Team Adam’s Nathan Hermida, he sings a rendition of “Chains” by Nick Jonas. Pharrell kicks off the critiques with, “It sounded good. You must be having the time of your life right now. We know you for singing with the guitar but to see you without it is a whole new thing. It was a great performance.” Nathan’s coach Adam comments, “This kid when I met him was so uncomfortable on stage, I could tell that your biggest hurdle would be performing. There were some issues with some of the vocal stuff but I have to tell you man that you get 100% for the effort you had to show and the fearlessness you had to show. I am so happy that at least on that front you really succeeded. As far as I am concerned you did an amazing job, and the rest can be fixed.”

Team Christina’s next singer to take the stage is India Carnee, she is performing Christina’s popular song “Hurt.” India receives a standing ovation from all four judges. Pharrell gushes, “Man that was like watching a film. You just closed the show to me. I can’t imagine someone not calling you to have you at the end of their film.” Blake agrees, “That was emotional, powerful, and dramatic – there isn’t anything you could have done to make it any better. Christina’s team is amazing!” Christina raves, “I am so speechless right now. There is something that happens when you walk on the stage. We want to hear every little inflection that you convey with your voice. You are a special singer and I am blessed to have you on my team.”

Up next is Team Christina’s singer Rob Taylor, he performs The Weekend’s hit song “Earned It.” Pharrell kicks off the critiques, “Good brother, that to me is the definition of different and effortless. That’s how it is supposed to sound. That’s how it is supposed to look, that is how it is supposed to feel. You just killed that!” Adam agrees, “Damn! I love you, because some people can sit perfectly still and sing beautifully – but you put your whole body in to it. You put so much, that’s crazy, I don’t even know what the hell to say.” Rob’s coach Christina agrees, “I am so happy for you right now, Pharrell was praising you, you made Adam do crazy things. The audience is so with you. I hope you really listen to this and feel all of this. You have everything, everytime you come out here you do something so unexpected and I love that about you.”

The final singer to perform on The Voice tonight is Deanna Johnston, her coach Adam Levine has selected the gospel song “Down To The River To Pray.” Blake begins the critiques with, “What’s happening right now is miles from the moment in Season 5 when no chairs turned around for you. Man Adam, you got a couple of your laps back on that one. That was outstanding.” Pharrell agrees, “This is the Deanna that we all turned around for – this is what got you four chairs. I think you did a wonderful job and welcome back.” Deanna’s coach Adam comments “We have had a lot of talks about confidence, self-esteem, and believing in yourself. You finally did what I have been waiting and dying for you to do this entire season tonight. And I am so happy because it was flawless. Just…thank you.”