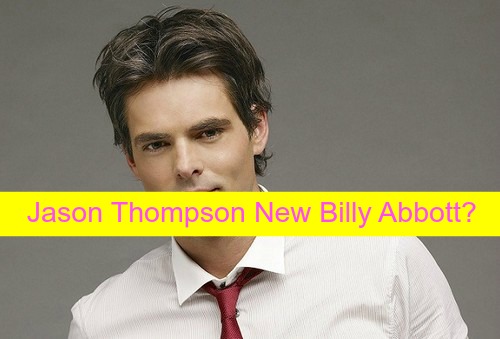 “The Young and the Restless” (Y&R) spoilers are on FIRE this weekend, and it is all centered around Burgess Jenkins. CDL and other sites have shared that the handsome hunk is OUT as Billy Abbott on the daytime drama, and it is rumored that former “General Hospital” favorite, Jason Thompson could be his replacement – especially now that JT has formally and  officially quit GH.

Burgess Jenkins has not been exactly embraced by the fans, despite being a talented actor, so his exit isn’t a HUGE surprise. The real question is, will TPTB recast the role or kill Billy off?

“The Young and the Restless” spoilers provide fans with the answer to the above question: Billy will suffer life-threatening burns in the Halloween gala that will require immediate medical intervention. It looks like he will need plastic surgery to repair his badly burned face – in other words, Y&R will have another actor [presumably Jason Thompson] step into the role with a new face.

Billy Abbott will likely face death in the fire, but by some miracle he manages to pull through. The doctor will explain that they tried everything to save him – and inform his family that he will need plastic surgery due to the extent of the burns. They, of course, will tell the doc to do whatever they need to in order to save precious Billy Abbott. When he recovers, Billy’s face will be different with a new actor in the role.

Burgess Jenkins has struggled to portray Billy in a believable way to many fans. Billy is a complex character integrally involved in many key characters and isn’t a character that the show could kill off without The Young and the Restless struggling somewhat. Billy is involved with many storylines – with rivals with Victor Newman [Eric Braeden], Jack Abbott [Peter Bergman], and Adam Newman [Justin Hartley]. Can you imagine the show without Billy Abbott?

For over a year, the fans have asked [begged] TPTB to recast the role of Billy Abbott. Many fans felt that Jenkins was not the right fit for the role. They didn’t think he was a bad actor – because he is talented. Clearly, he was not meant to portray someone like Billy. Burgess would have been a better hitman or police officer, truthfully – he is hard and straight.

According to Internet rumors, TPTB were not happy with Jenkins’s performance during Adam’s trial- they felt he lacked emotion and a connection to Delia [Sophie Pollono] when he recounted the events on that tragic night.

Now that the time is here, and Burgess Jenkins is out as Billy – and Jason Thompson is most likely in – it is bittersweet. As much as fans wanted to see him let go, now there’s a level of uncertainty about the future of Billy Abbott. Don’t forget to check back later for juicy “The Young and the Restless” spoilers, rumors, and news!