BY Heather Hughes on December 8, 2015 | Comments: one comment
Related : General Hospital, Soap Opera, Spoiler, Television, The Young and the Restless 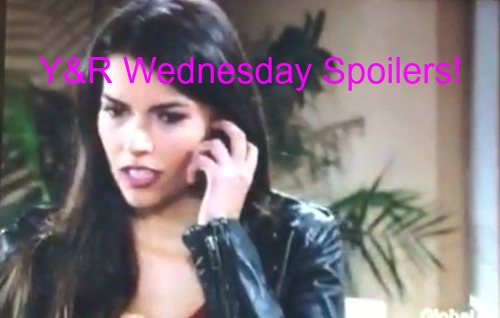 “The Young and the Restless” spoilers for Wednesday, December 9, tease that Noah (Robert Adamson) will have major news for Marisa (Sofia Pernas). Kevin (Greg Rikaart) has learned startling information and it’s raised some doubts about Luca’s (Miles Gaston Villanueva) claims.

Noah will call Marisa and suggest that Luca has been lying to her. Something about Luca’s story involving Ava just doesn’t add up. Marisa will give Luca a glare as Noah spills the details. Could cute little Ava possibly NOT be Marisa’s daughter? Did Luca pay for a rent-a-daughter to con Marisa?

Meanwhile, Chelsea (Melissa Claire Egan) will be surprised by Adam’s (Justin Hartley) actions. In Tuesday’s episode, Adam tells Jack (Peter Bergman) that Billy (Burgess Jenkins) caused the chaos and he needs to take the fall. Victor (Eric Braeden) is coming for Jabot, but using Billy as a scapegoat will help Jack get out of this unscathed.

It looks like Chelsea doesn’t agree with that strategy. In Wednesday’s preview video, Chelsea asks Adam if he really hates Billy so much that he would try to turn his own brother against him. Y&R viewers know the answer to that question is probably yes, but Adam may not be willing to admit it.

Other “Young and the Restless” spoilers say Ashley (Eileen Davidson) will be shocked by how much the Abbotts will have to pony up if they want to make Jabot’s legal problems go away. The preview video shows Ashley asking if it’s really going to take $50 million to settle this. Victor will reply that Ashley needs to add a zero to that number!

It seems a cool $500 mill would work for Victor. That’s definitely more than the Abbotts are willing and possibly able to shell out. This could be a huge blow to the company – a finishing blow! Will Jabot be able to weather the financial storm that’s brewing? Stick with “The Young and the Restless” for updates on the tense battle ahead.

So Y&R fans, what do you think about Luca’s lies? How will Marisa react when she learns she’s been duped? Does Adam want to pit Jack and Billy against each other? Will Victor succeed in bleeding Jabot dry? Let us know what you think in the comments below and don’t forget to check CDL often for the latest “Young and the Restless” spoilers, updates and news.