The Young and the Restless (Y&R) Spoilers: Patty and Ian Partner Up – Match Made in Heaven or an Unholy Alliance? 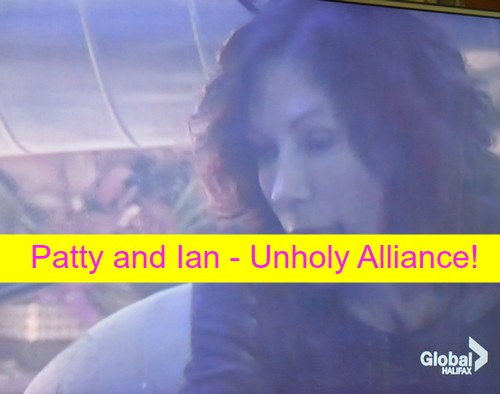 “The Young and the Restless” (Y&R) spoilers hint that Patty Williams [Stacy Haiduk] could be in serious trouble partnering up with Ian Ward [Ray Wise]. Patty is extremely trusting and vulnerable and Ian will use that his benefit- and toss her aside the first chance he gets. Is the pairing a match made in heaven or a total disaster?

At the moment, Genoa City is declaring Patty and Ian Dead. They have no evidence that would suggest that the crazy duo could survive the fiery blaze. Paul Williams [Doug Davidson] and Dylan [Steve Burton] are busy trying to piece together the events surrounding the fire and cyber-attack on Newman Enterprises.

Patty has nothing to do with it; however, Patty’s psychiatrist, Dr. Anderson wants her family to believe that she was the one who started the fire. Is it possible that Dr. Anderson could be working with Ian Ward, for some reason?

Patty escaped Fairview for one reason; she felt like she HAD to try to save Sharon [Sharon Case] from the shady doctor. She feels in her gut that something isn’t right about her treatment and wanted Dylan to save Sharon from the doctor’s evil plans.

Patty told Jack [Peter Bergman] that she was only there to tell Dylan something very important. “I have to tell him he cannot trust HER,” Patty whispered. The words haunted Jack so much he told Paul and Dylan about the conversation.

Dylan heads over to talk to Dr. A and find out the scoop on Patty and Sharon’s medical treatment. As predicted the shady doc refused to allow Dylan to see his doped up and obviously not pregnant fiancée. The doctor tells him that Patty’s escape had nothing to do with Sharon medical care. Dylan seemed frustrated by the lack of the corporation from the psychiatrist.

The real question is, how will it pan out for Ian and Patty? Will they be the dynamic duo or will it be a disaster all the way around? Patty longs to feel valued, loved and treasured; however, Ian is not the answer.

When TPTB said they were giving Ian a romance possibility, no one suspected it could be Patty. What do you think about the pairing of Patty Williams and Ian Ward? Do you think Ian will be upfront and honest with her? Don’t forget to come back late for juicy “The Young and the Restless” spoiler, rumors, and updates!