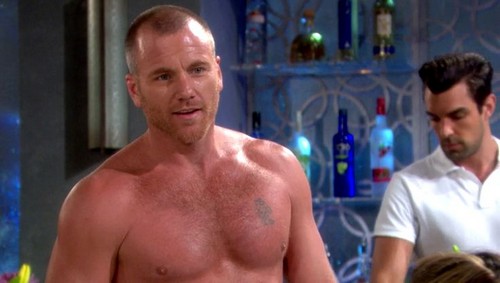 “The Young and the Restless” spoilers are rolling in and it looks like the CBS daytime drama may lose another key character. Many fans are speculating that it will likely be Stitch (Sean Carrigan) because his contract is up in just a few weeks. Sean Carrigan fired? Well all the evidence points in that direction. It wouldn’t be too much of a loss if Stitch (Dr. Ben Rayburn) was killed off or left town at this point in terms of important storylines since Stitch is not involved in any. The fact is, the show has given him very little screen time in the last few weeks except for today, September 22, when Stitch and Abby breakup.

Stitch was in a committed relationship with Abby Newman (Melissa Ordway). They have zero chemistry and seem to be in totally different places right now. Abby wants a successful career and to prove that she is a powerful businesswoman like her father, Victor (Eric Braeden). Stitch is a doctor – and helping people is his passion. Making matters worse is that the Paragon Project is wrecking havoc with Newman Enterprises and driving Abby crazy. She has no time for Stitch’s neediness now.

The duo fell in love when he was her bodyguard a few months back. Abby was attacked by Marco Annicelli (Peter Bergman), who was her uncle Jack’s doppelganger. He felt the need to protect her and at the encouragement of his then girlfriend and Abby’s sister, Victoria (Amelia Heinle), he stepped in to make sure Abby was safe from any attack.

Stitch hasn’t had a big storyline since Victoria’s paternity was questioned. It is speculated that Stitch was given another year to wrap up any paternity questions that may come up. So far, TPTB had kept Billy (Burgess Jenkins) as baby Katie’s daddy.

It looks like Stitch may be killed off during November Sweeps. Chuck Pratt revealed that during the annual Newman Ball, there will be an explosion. “At least four people will die, with one being a key contract character,” Chuck revealed. It makes perfect sense that Stitch would be killed off at this point.

Stitch’s sister, Kelly Andrew (Cady McClain) is dead and his ex-wife and son live in Australia. The only time he gets any screen time is to support Abby’s storylines. It is definitely time “Y&R” says good-bye to Sean Carrigan as his character appears to have run its course. Today’s break-up with Abby only puts another nail in the coffin that holds Sean Carrigan’s Y&R life expectancy.

In just a few weeks, we will know for certain if Stitch is the one to die. Sean Carrigan’s contract is up in just two weeks. So if Stitch is being killed off – and TPTB are not renewing Sean’s contract – we should see the action at the beginning of November Sweeps. Do you think Stitch could be leaving the show? Don’t forget to check back later for more juicy “Young and the Restless” spoilers, rumors, and updates!