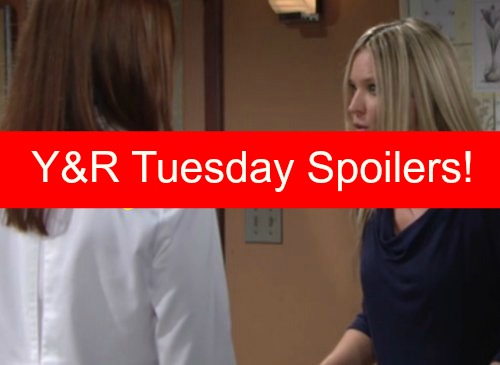 “The Young and the Restless” (Y&R) spoilers for Tuesday, December 1, tease that Adam (Justin Hartley) will try to settle back into his life as a free man. Thanks to Victor (Eric Braeden) and Abby (Melissa Ordway), Adam will manage to get his sentence reduced in Monday’s episode.

Judge Elise Moxley (Jensen Buchanan) will let Adam head home, but his troubles are far from over. Tuesday’s preview video shows Chelsea (Melissa Claire Egan) reminding Adam that something is still hanging over them.

We don’t know for sure what Chelsea means, but it’s clear that Victor will be a lingering threat now that Adam is out of prison. Chelsea may be concerned about Adam getting involved in Victor’s next shady scheme.

After all, Judge Moxley is giving Adam a pass because she thinks he’s learned his lesson. But if Adam gets caught on the wrong side of the law again, he’ll undoubtedly be headed straight back to the slammer.

Nevertheless, Adam will have to do whatever his father asks if he wants to keep his secret. If he doesn’t follow orders, Victor could tell Chelsea that Adam is the true father of Sage’s (Kelly Sullivan) baby.

Speaking of Sage, it seems she’ll have a slight tiff with Faith (Alyvia Alyn Lind). Sage and Faith have been getting along pretty well lately. Unfortunately, that could come to a screeching halt on Tuesday’s episode of “The Young and the Restless.”

Y&R’s preview clip shows Sage telling Faith that her dad needs her right now and she’s being selfish. Perhaps Faith is hoping to spend more time with Sharon (Sharon Case) and Dylan (Steve Burton) now that they’ve got a new bundle of joy.

Nick (Joshua Morrow) won’t appreciate it when Sage snaps at his little girl. It sounds like they’ll have some issues to sort out. Meanwhile, Sharon will stand up to Dr. Anderson (Elizabeth Bogush) and insist that she’s leaving Fairview with Dylan.

Sharon will believe she’s ready to check out and care for her child at home. Naturally, Dr. Anderson won’t be pleased by the news. Maybe the evil doc is hoping to keep the baby out of Nick and Sage’s sight for the time being.

If Sullivan grows a bit more, it will reduce the likelihood that Sage and Nick will recognize him as Christian. Of course, most babies look kind of generic anyway, but it’s better to be safe than sorry.

Will Dr. Anderson convince Sharon to stay or will her mind be made up? Stick with the CBS soap for updates on where this baby-swap storyline will go from here. So Y&R fans, what do you think about these “Young and the Restless” spoilers?