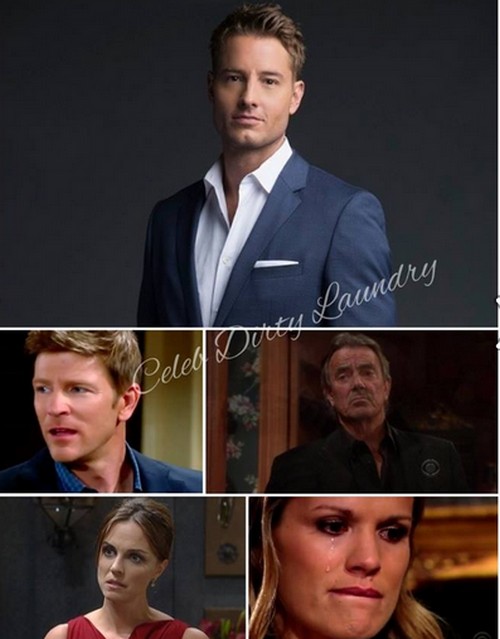 The Young and the Restless spoilers explore Adam Newman’s big reveal on July 13 and how this will affect Y&R characters and the show’s dynamics. Y&R has leaked the fact that they will be revealing Gabe’s [Justin Hartley] true identity as Adam Newman on July 13. There will be fallout and lots of it… but where do we start?

Chelsea [Melissa Claire Egan] has been lied to about Adam’s true identity since Gabe hit town back in Nov 2014. Adam has had several opportunities to tell her and Chelsea has cried and longed for her “supposed” deceased husband. Adam seemed to want to tell her BUT of course he did not, he continued to get closer to her and son Connor. Sources say Chelsea will be devastated for more than one reason. Adam has deceived her in more ways than one. Chelsea will be livid and sources say will have lots of questions but will be so angry she will not get all of the answers all at once.

Adam will eventually get to explain to her that Billy [Burgess Jenkins] hijacked him, held him at gun point and then shot him causing the horrible crash that they were both involved in making Chelsea think Adam was dead. Chelsea will ask about the role Sage played. She will take in to consideration that he was shot by Billy and she has not forgotten the fact that he saved Connor and Billy from the burning building. BUT that does not make any of Adam’s deceitful actions any easier for Chelsea to swallow. There will be lots of tears on both sides, good and bad.

This shocking exposure of Gabriel Bingham will affect Sage Warner [Kelly Sullivan] perhaps more than any Y&R character except Chelsea. Sources say Sage is going to freak out like we have never seen, begging Adam not to tell Nick [Joshua Morrow] the truth since she is already having pregnancy problems. What will this big reveal do to her? Well sources say first thing Nick does is ask Sage did she know Gabe was Adam? I see a dramatic pregnancy faint in the future before that truth comes out. Sources say Sage will use the baby to keep Nick, but then we already knew that since isn’t that what she is doing now?

Rumors say Billy Abbott demands Adam’s arrest and resignation from Newman Jabot IMMEDIATELY but only after Billy tries to beat the living daylights out of him – “he knew he hated that guy for a reason.” All of Billy’s hate comes back and he wants revenge now! Poor Billy has forgotten his deep dark secret that he never told anyone  but Adam will be there to remind Billy Boy that he tried to kill him and has the bullet hole to prove it!

Victor Newman [Eric Braeden] will be stunned and with “The Moustache” there are strangely mixed emotions because as much as he despises his son he is also relieved he is alive because in the end it is all about family with Victor even if he cannot stand you. This reveal will also start another snowball that will effect Victor Newman big time! This will be the time that Victor finds out from Adam that he really shot Jack Abbott not the impostor Marco that he brought into Genoa City. Reality will hit Victor hard in more ways than one.

Adam may still be holding the cards except for that little prob of being accused of Delia’s death – where is Avery [Jessica Collins] when you need her? Because Marco [Peter Bergman] set up the DNA results for “Gabe” to be his long lost son people are going to know Adam is not Jack’s but Victor Newman’s son. They will want to know how the DNA results turned out to show that Adam was an Abbott? That is where the Marco story for Victor will start to unravel and Victor will actually need Adam’s help… will Adam help his dad? If they are both in hot water they will join forces – certainly possible but that is yet to be discovered.

Jack will be out of his coma by the time Adam reveals who he really is and the question will be will Jack admit that he knew Gabe’s true identity for months before his kidnapping or will Jack fake amnesia to save himself from the wrath of Billy and Phyllis [Gina Tognoni]? What is so ironic in this Newman-Abbott feud is that Victor saved Jack in the collapsed building yet he came back with vengeance to take him down. Adam Newman saved Billy Abbott in the burning fire to only come back and take his Dad’s company along with his wife Chelsea & son Connor. The Newman’s do not give up when they want something. That old saying the apple does not fall far from the tree had to be talking about Victor and Adam Newman.

Y&R will finally be picking up some steam after July 13 because the Adam reveal will affect just about everyone in Genoa City. Marco is supposedly dead but sources say it’s going to take more than a little hottie like Marisa [Sophia Pernas] to rid the world of that monster – next time maybe a silver bullet will do the trick but for now Marco will be creeping in the shadows of GC. Don’t forget to mark your calendars CDL’ers as July 13 will be the beginning of the end for many GC residents.

Are you happy the truth about Billy shooting Adam will finally be out? Do you think Jack will admit he knew who Adam was all along? Will Sage continue her lie or will she be forced to tell the truth and what other secrets is she keeping? Stay tuned for all of those answers and more on the Y&R! Please leave your thoughts and comments in the CDL comments below.