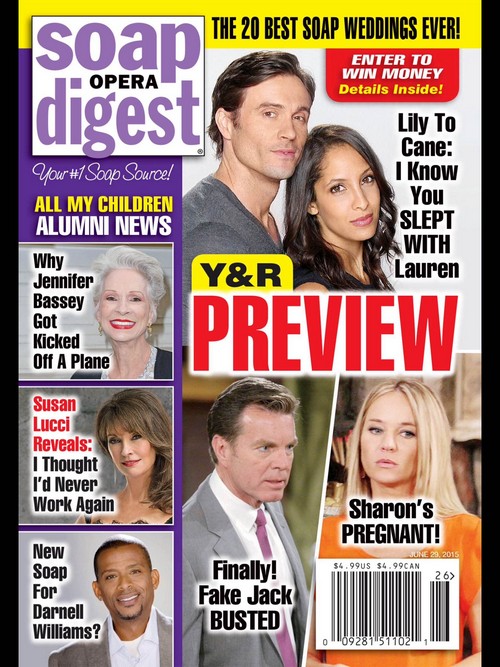 The Young and the Restless spoilers reveal that Marco’s [ Peter Bergman] jig is coming to a quick end as Adam [Justin Hartley] discovers he is NOT Jack! Don’t get to excited yet since what we have learned is just when you think this nightmare will be over Marco manages to worm his way out of trouble.

This cover of SOD June 29 reads “Finally! Fake Jack Busted” – or is he? Every time we hear fake Jack is exposed he gets out of yet another lie. This storyline seems to take a new twisty turn every week, now we are seeing Flack [ Peter Bergman] and Gabe conspiring about a lie about the paternity of Gabriel that they are both a part of. Flack decided to tell Victor [Eric Braeden] that Gabriel Bingham was is his long lost son to keep Victor at bay and bring Gabe closer as an ally. The lie has spun out of control as now EVERYONE in the Newman/Abbott families know this supposed secret.

SOD spoilers reveal Adam and Marco are conspiring to get the DNA test to read that Flack is indeed Gabe’s dad. The spoiler says while they are discussing the DNA plan, Adam is starting to realize something is very off about “Jack ” with all of these devious diabolical plans. When Adam questions Flack’s plan Flack tells him that he will have fake DNA test results made up proving they are father and son and that no one will be the wiser.

Y&R spoilers says Adam is becoming very suspicious of Flack and throws out a red herring to see how Jack will react. Adam makes up a fake story about Phyllis [Gina Tognoni] to see how Jack will react… saying “oh yes that kinda reminds me of the time that Phyllis’s cooking almost burned down the Abbott cabin.” And Marco laughs along with him until Adam stops laughing and says “Especially since it never happened!” Marco stares at Adam and Adam asks “Who the hell are you?” realizing that the person he has been dealing with is NOT Jack. Sources reveal Marco will lie and bring up the car accident concussion that caused his memory problems but Adam is skeptical, but does not lead on that he is suspicious.

As we saw last week, Marisa [Sophia Pernas] got her hands on a cell phone and Jack [Peter Bergman] asked her to call Jabot right away so Marisa did. When Marisa calls Jack Abbott’s phone Marco answers and says “Jack Abbott” – Marisa is silent for a moment then says “Marco” and Marco responds with joy that she is still alive and inquires about Jack Abbott.  Marissa lies and says “Yes’ Jack is dead. Marco wants her to come to GC right away and she ask for money which he promises to wire her by the end of the day. Jack and Marisa are a team at this point, Marisa is very kind to Jack and Jack finally trusts her.

Marisa knows what Marco is up to and tells Jack he has taken over your life! Jack is horrified and anxious to get back to the devastation and witness what has happened to his life and his family. Marisa plays a big part in keeping Jack safe from the evil Marco… she knows Marco and how he thinks. She thinks it is best to lay low at first she will work her magic on the Peruvuian prisoner! As stated before on CDL Jack will reach out to his ally Adam Newman and Jack and Adam will team up to take down the evil Marco Anicelli – with a little help from the spitfire Marisa of course.

Adam will see a side of Jack that he has never seen before as he is running on all kinds of emotions and deep strength that he has never felt before. Jack has been violated, betrayed, cuckolded and abused on many levels and his family has been deceived for many months. Jack is coming back for vengeance and in the end hell hath no fury like the REAL JACK ABBOTT impersonated! Stay tuned to CBS’s Y&R for an epic battle of control. What do you think CDL’rs – will it be that easy to take Marco down? Will Jack Abbott finally get his life back? Please share your thoughts in the CDL comments  below!