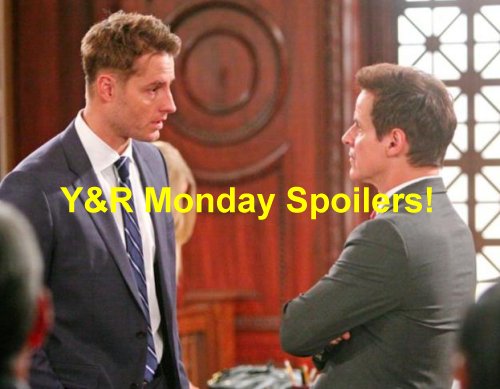 “The Young and the Restless” (Y&R) spoilers for Monday, November 30, tease that Chelsea (Melissa Claire Egan) will visit Adam (Justin Hartley) as he prepares to head to court. Adam will worry that Victor (Eric Braeden) won’t hold up his end of the bargain, but Chelsea will assure Adam that everything will work out.

Meanwhile, Victor will get a call from Judge Elise Moxley (Jensen Buchanan). Elise will make it clear that Victor’s threats aren’t going to work. The judge is planning on following the law. At the athletic club, Victor will chat with Michael (Christian LeBlanc) about bringing in a surprise witness.

Once Michael is gone, Victor will make a call to the person he’s hoping will help Adam’s case. At Jabot, Phyllis (Gina Tognoni) will meet with Topher (Brian Dare) and insist that he has something she wants. Phyllis will suggest that she can make Topher a hero.

Topher will admit he stays in contact with Ian (Ray Wise) through an encrypted site. Phyllis will make a video and send it to Ian. In the video, Phyllis will tell Ian that he needs to get in touch with her. Victor is out for blood and things could get ugly.

At the courthouse, we’ll learn that Abby (Melissa Ordway) is the witness Victor has in mind. Abby won’t be on board with the plan, but Victor will urge her to reconsider. Victor will point out that Delia’s (Sophie Pollono) death was simply an accident.

Adam is Abby’s brother and he needs her help. Billy (Burgess Jenkins) will pipe up that Delia was Abby’s cousin. Victor and Billy will disagree on whether or not Abby will have to lie on the stand. Victor will say he just wants Abby to tell the truth.

Billy will complain about Victor’s constant manipulation. Abby will be called to the stand and Christine (Laralee Bell) will object. Judge Moxley will allow it and Michael will start asking Abby questions.

Michael will want to know what happened the night of the fire. Abby will tell the story and Michael will mention Adam’s heroic actions. Finally, Michael will ask Abby if she believes Adam has paid for his crime.

Abby will admit that she thinks Adam has learned his lesson. After deliberating, Judge Moxley will return with a decision. Adam will get the good news that his sentence is being reduced to five years of probation and 1000 hours of community service.

Nevertheless, the judge will declare that Adam needs to stay in line. This is Adam’s last chance. Other “Young and the Restless” spoilers reveal that Paul (Doug Davidson) will find Joe’s (Scott Elrod) DNA on the hoodie.

However, it would be inadmissible in court since it was obtained illegally. Paul will want Cane (Daniel Goddard) to stay out of this and let the police build their case. Back at the athletic club, Joe will ask Lily (Christel Khalil) to have breakfast with him, but she’ll turn him down.

Joe will wonder what Lily’s game is and he’ll indicate that he’s suspicious of why Colin (Tristan Rogers) called him away from his suite. Joe will think Lily searched his room while he was gone, but Lily will say she was just looking for a blanket.

They’ll argue and Lily will end up calling Joe a liar. Lily will admit that they found the black hoodie in Joe’s safe. Joe will head to the police station to report a burglary. Paul will show him the hoodie and Joe will state that he’s being framed.

Later, Cane will give Lily updates on the DNA evidence and she’ll regret telling Joe about finding the hoodie. Joe will undoubtedly strike back now that he knows they were sniffing around. Cane will want Lily to help him clear his name and she’ll agree to do whatever she can.

Y&R viewers will be anxious to find out if Cane and Lily can clean up this mess. Stick with the CBS soap to see if their efforts will pay off. So Y&R fans, what do you think about these “The Young and the Restless” spoilers?

Voice your opinion in the comments below and don’t forget to check CDL often for the latest “The Young and the Restless” spoilers, updates and news.