Tom Hank’s Wanna-Be Rapper Son Chet Hanks Out of Rehab and Partying – Fallen Off The Wagon? 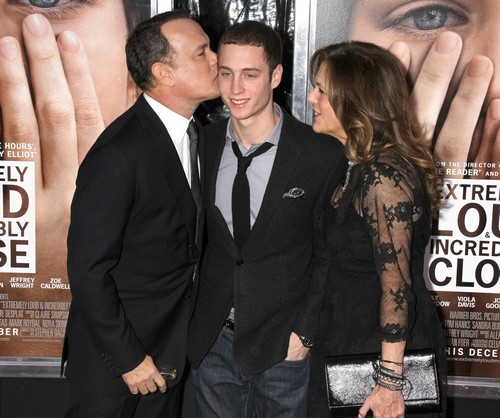 Actor Tom Hanks is perceived as a respectable family man by his legions of loyal fans and the media – which is why everyone is so baffled by his troubled son Chet Hanks (Chester Hanks). Tom has lived a pretty scandal-free life since he skyrocketed to superstardom, however his 24 year old son and wanna-be rapper Chet has been in and out of rehabs, plagued with substance abuse, partied like a rockstar, and kept some questionable company in Hollywood.

In 2014 Tom Hank’s son Chet Hanks was admitted to rehab – and put his rapping career on hold to get sober. Although Chet just left rehab for his cocaine addiction, rumor has it that he is already in the process of falling back off the wagon. According to the January 19 edition of Star Magazine, “The 24-year-old aspiring rapper was surrounded by booze as he partied at a Hollywood nightclub until nearly 2:00 AM with friends. He spent the entire night dancing and flirting with women. Chet’s playing with fire when it comes to his sobriety. He won’t give up going to clubs. He doesn’t see the harm in it, but he is one bad decision away from ruining everything he has worked so hard for.”

Tom Hanks has been more than supportive of his son Chet, and has been encouraging him to get his life together and stay sober. But, when is enough going to be enough? Chet hasn’t been out of rehab for a month yet and he is already partying like a rockstar again – on his father’s dime. We get it – you can’t be a rapper without street cred and a following, but is clubbing every night of the week really worth a mixtape that will probably never see the light of day?

What do you think of Tom Hank’s son’s drug woes? Has he fallen off the wagon again, or can he party every day and stay sober? Should Tom just cut Chet off and let him fend for himself? Let us know what you think in the comments below!