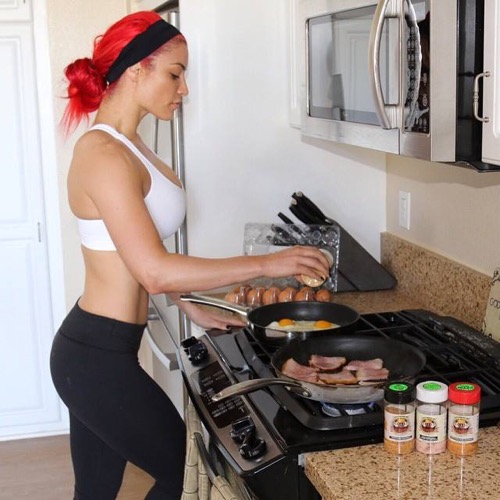 Tonight on E! the WWE’s Total Divas starring the Bella Twins and the rest of the Divas continues with an all new Tuesday July 21, season 4 episode 3 called, “Eat Your Heart Out.” We’ve got your recap down below! On tonight’s episodes, Peace talks between Nikki and Eva end very badly.

On the last episode WrestleMania Week was off to a rocky start as diva drama escalated. Included: Brie feared she and Bryan are facing fertility issues; Nattie worried her dad may relapse; and Paige discovered she was unprepared for the biggest event of the year. Did you watch the last episode? If you missed it, we have a full and detailed recap right here for you.

On tonight’s episodes per the E! synopsis “peace talks between Nikki and Eva end very badly; Nattie takes a risk on stage; Paige is brought to tears during her first WrestleMania; and Brie and Bryan receive the results of their fertility testing.”

Tonight’s episode of Total Divas kicks off with Eva Marie and her husband meeting up with the divas for a charity dinner, “Superstars For Hope.” Nikki tries to extend an olive branch and invites her to meet up with her for lunch during Wrestlemania so that they can discuss all of the drama. Brie is not happy, she is furious that her sister is actually talking to Eva Marie after their huge fight.

Eva tells Trinity and Natalie that Nikki invited her to lunch, she thinks that it might be some sort of set up. Trinity pressures Eva to meet up with Nikki, she wants them to work things out because she is sick of everyone fighting and being stuck in the middle of it. Brie and Bryan go out with Nikki for dinner after the charity event – Brie whines that she hopes she is pregnant next year during Wrestlemania. Nikki is upset that they keep talking about babies, because she and John decided not to have any babies.

Natalie gets to meet ALundra Blayze, a WWE superstar. At Wrestlemania Natalie has to make a speech for Alundra because she is being inducted in to the Hall of Fame. Natalie wants to chat with her, just to make sure that she embodies her perfectly in her Hall of Fame speech.

The next day Eva heads to Nikki’s hotel room so that they can discuss all of the drama. Nikki explains that most of the drama is over a quote that Eva posted on Instagram. Eva thinks that is petty and they need to act like adults, and if the divas had a problem with her then they should have told her. Nikki snaps at Eva that she needs to stop acting like a victim, and none of the divas are worried about her or what she says or thinks. It looks like they won’t be burying the hatchet any time soon …

Nikki heads to her sister Brie’s hotel room and breaks down in tears as she tells her about her fight with Eva. Apparently Eva told her she was a horrible Diva Champion, and she was going to take her title and do something more positive with the divas. Nikki is in shock that Eva talked to her like that, Brie reassures her that Eva is wrong and she doesn’t even want to be a diva she just wants to be famous. Brie starts cursing and spewing, she shouts that the divas are going to take Eva Marie down.

It’s almost time for the Hall of Fame inductions. Natalie is freaking out because the producers tell her that she needs to change part of her speech about Alundra at the last minute. Meanwhile, Bryan is getting ready for his speech about his fan Connor who passed away. Brie smiles for the cameras and Nikiki works the red carpet, but they are both still upset over the fight with Eva and are having a tough time shaking it off.

Eva Marie shows up at the Hall of Fame inductions with her husband Jonathan, all of the other divas are giving her the cold shoulder and won’t even look at her. Jonathan gives her a pep talk and tells her that the divas are just “sheep.” Meanwhile, in the dressing room Natalie is having a melt down and crying because she likes her speech – but the producers wont let her read it. Eventually, Natalie and Bryan take the stage and give their speeches, they go off without a hitch and Natalie reads the speech that she wrote – even though they told her that they wanted to change it.

It’s finally the day of Wrestlemania, Nikki and Brie head out to do interviews and Eva Marie shows up to do interviews and sign autographs at well. Afterwards, Nikki and Brie go do a last minute workout with Paige and then they all go backstage to “get pretty” for the big match. The fans start filing in to the sold out stadium for Wrestlemania and everyone is rushing around back stage to get ready.

Wrestlemania is officially under way, Natalie and Naomi nail their tag team match. Then Daniel Bryan takes the ring. Brie watches from backstage with her sister Nikki. She fills Alundra in on her decision to quit the WWE to start a family. Nikki confesses that she was going to quit too, but then she changed her mind because she wants to be a positive leader for the other divas. Meanwhile, Paige is having a meltdown – this is her first Wrestlemania and this match is a big deal and could make or break her career.

Paige and her tagteam partner AJ take the ring for their match against Brie and Nikki Bella. Paige’s hard work paid off and she and AJ wind up winning the match and beating the Bella Twins. Paige is so happy that she breaks down in tears backstage after the match while all of the other divas congratulate her.

A week later Brie and Bryan head to the fertility clinic to get their test results. They had tests done to find out if they were fertile, and whether or not they can get pregnant with their first baby. The doctor says that Brie is fertile, and she is ovulating on a regular basis. The doctor reveals that Bryan’s test came back and he is fertile as well – so they shouldn’t have any problem getting pregnant, they just need to make sure they are both in town at the same time so that they can have sex during the window. Brie tells Bryan that she has decided to stay in the WWE until she actually gets pregnant.

Eva Marie goes out to dinner with Jonathan, she has amazing news for him – she just signed with one of the biggest agents in Hollywood – Brad Slater, the same agent that represents “The Rock.” She can’t wait for the Divas to find out that she signed with Slater and “how bad of a bitch she really is.”