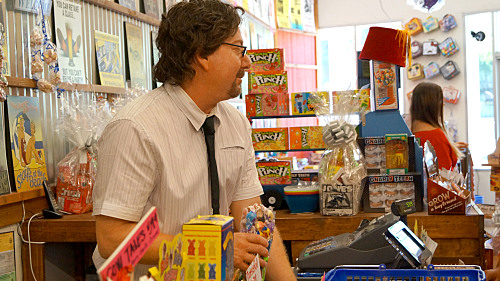 Tonight on CBS their Emmy award winning reality show, Undercover Boss continues for an all new Friday January 23, season 6 episode 7 called “Rocket Fizz” and we have your weekly recap below. On tonight’s episode Robert Powells, President and Co-Founder of The Rocket Fizz Soda Pop and Candy Shops, the largest candy and soda shop franchise in America, embarks on an emotional journey to discover what keeps his candy shops sweet.

On the last episode, David Seelinger, Chairman and CEO of EmpireCLS Worldwide Chauffeured Services, a luxury chauffeured transportation leader that provides services in more than 700 cities worldwide, goes undercover to see if his company is running smoothly. Following a 25-year break from chauffeuring, Seelinger found it’s not as easy as he remembered, and he almost blows a gasket while working beside a dispatcher who doesn’t follow the motto, “the customer is always right.” Did you watch the last episode? We’ve got a detailed recap right here for you.

On tonight’s episode as per the CBS synopsis, “Robert Powells, President and Co-Founder of The Rocket Fizz Soda Pop and Candy Shops, the largest candy and soda shop franchise in America, embarks on an emotional journey to discover what keeps his candy shops sweet. The boss discovers that the inventory system is as old-fashioned as his stores’ classic candies, and he fizzles out while working the assembly line at his bottling plant.”

Tonight on #UndercoverBoss, the boss is Rob Powells of Rocket Fizz a soda pop and candy shop. It’s based in California and is the largest candy and soda franchise in the US. He’s the co-founder and president. They have all the old-fashioned candy that reminds you of your childhood. There are 500 different sodas and over a 100 are custom including celebrity brands like Roddy Piper and Snooki. He co-founded with Ryan Morgan. They flew to Asia and bought fake dog poop to sell to finance the company. They have 48 stores and make $35 million a year.

He runs it out of his home office in Northern Nevada. He has no kids and has never been married. His girlfriend committed suicide and he missed all the signs. He decides on a conservative makeover. He wants to go undercover to check on the infrastructure and see what mistakes are being made. He heads to Vista to work as a sales associate. He meets with Kim and she says she’s a fizzateer. She says she doesn’t look like he would be in the sweets industry.

She greets customers and tells him to be really upbeat. He runs the register and says it’s slow and needs to be streamlined. Kim says she knows it’s hard. She says she wouldn’t hire him. Next she shows him how to make gift baskets. She tells him how she works and goes to school full time both. She says she’s love to open a Rocket Fizz that has sign language capability. He says she’s great.

Next he goes to a bottling plant near Lone Pine, California to work with a manager. He says they’ve had problems there and wants to figure out what’s going wrong there. He meets Ben, the manager. He shows him how to do things but Rob is really struggling to get the hang of how to do things. He’s really clumsy and can’t keep up. He says it’s like swimming up Niagara Falls. He says he’s getting his butt handed to him left and right. It’s a #BossFail. He breaks bottles and jams the line.

Ben tells him about his kids and says he loves his kids and wants the best for them. He says he has a brother who got shot and says he was awesome and he just misses him. Rob says he has a great attitude. Next Rob goes to Tampa to work with a franchise owner called Marianne. She says he seems out there and crazy. They are unpacking and looking over the shipment and it’s almost impossible to find things on the invoice.

He doesn’t like things. He says this is ridiculous and is taking time away from her store and it doesn’t make sense to him. She says some days it makes her want to walk away from it. She says she was in tears. She says there’s a POS system coming and new stores have it in the price of the franchise but she has to pay for it. He says this should not be this way. She hows him the pricing gun and shows him how to work it. He laughs and says she needs her computer system. He thinks how much he hated pricing candy back in the day.

She comes back to check on him and he says this is crazy and she agrees. She says talking with people takes her away from customers and that’s her favorite part of the work. They go sit outside to chat. She tells him she’s never been outside the US. He asks where she would go to and she says Spain. She says she grew up in Camarillo, California and she went to a Rocket Fizz there and that prompted her to open the franchise. She says her brother passed away a couple of years ago and it changed her outlook.

She says she started wanted to live life differently. She says he lost his girlfriend and that made him want to live differently too. He tells her how she killed herself and that he buried himself in work. She tells him to go finish inventory. Next he goes back to Camarillo to a prop warehouse. He works with Daniel. He usually works with distribution but is working with props today. Daniel says he’s not dressed for this. They load the truck with a forklift.

He teaches him how to work the forklift. He’s not doing a great job with the forklift. Daniel says he’s a disaster and takes back over. Daniel talks about his wife and says he had a rough father who beat his mom and then OD’d. He says his mom abandoned them and he and his brothers slept on the streets. Then he says his wife straightened him out. He says his wife has lupus and almost died last year from a heart attack. He says her insurance doesn’t always cover the bills.

He says he wishes he had the illness and not her. Rob hugs him and comforts him. Next is the #BossReveal. Rob cleans himself up for the big reveal. He introduces himself to each of the people he met. He tells them they’re on Undercover Boss. He tells Marianne she’s amazing and needs her computer system. He says she’s running a great store but her pricing system is archaic. He says he’s giving her a free POS system. She thanks him.

He tells her that he wants to honor her brother Joe by bottling a soda in his name and will donate proceeds to a charity that she selects. He says she works a lot – more than she should and needs a vacation. He says he wants to send she and her husband to Spain. She thanks him profusely and hugs him. She says the best part of all of it is the soda in her brother’s name so she can see it every day. She says her brother would love it.

Next he talks to Ben. He says Ben works so hard. He says they’re going to add more machinery to correct the labeling problems. He says they’re going to set up a college fund for Ben’s kids and will add to it every year to it every year. Ben is thrilled. He also says he wants to talk about his brother – he says he’s going to give him $20,000 to help him and his brother’s family. Ben is crying and says it’s crazy. They hug and he tells him it’s insane. He says he’s worry free and he can breathe.

Next is Kim. She says he’s slow at the cash register. He says he’s going to accelerate the faster bar coded POS register system. He talks about her sign language education. He says he’s giving her $20,000 to help with her college. She starts crying and he says when she graduates she wants to live in Riverside and he says he wants to help her get a franchise and will waive the franchise fee. She’s stunned and hugs him. She says she can now pursue her dreams and hugs him again.

Daniel is next. He says Rob was a disaster. Rob says he taught him a lot and he wants to bottle a soda with his wife and donate the profits to them to help with her medical expenses. Daniel cries and thanks him. Rob also says he’s getting him a car and Daniel starts crying and says he’s giving him $25,000 and Daniel says he’s an angel. Daniel keeps crying. They hug and he tells Rob he’s really grateful. Rob is crying after he leaves.

Rob says he’s met people that have showed him that he needs to change how he’s living his life. He talks to Daniel’s family. In the weeks since, Kimberly is graduating and working on opening her store. Marianne is planning her vacating to Spain and has her new POS system. Daniel’s wife’s health is better.