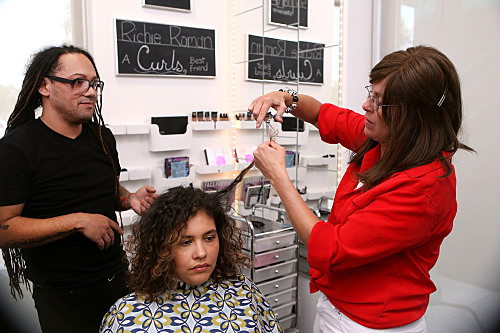 Tonight on CBS their Emmy award winning reality show, Undercover Boss continues for an all new Friday January 9, season 6 episode 5 called “Phenix Salon INC” and we have your weekly recap below. On tonight’s episode Gina Rivera, founder and president of Phenix Salons Inc., works undercover at her salons.

On the last episode, Jose Costa, the Venezuelan-born President of Maaco, went under the hood to inspect “America’s Bodyshop,” On the job, the boss got overheated when he found an employee cutting corners. Additionally, the boss’s detailing work could stand to be fine-tuned. Did you watch the last episode? If you missed it, we have a full and detailed recap, right here for you.

On tonight’s episode as per the CBS synopsis, “Gina Rivera, Founder and President of Phenix Salons INC., a franchise which offers independent salon and business professionals the opportunity to own and operate their own luxury salon suites, goes undercover to see if it will color her perception of how the company is running. Despite 25 years of experience as a hair stylist, Rivera weaves her way through an unfamiliar hairstyle. Additionally, she tries to stay sharp when tasked with a straight razor shave, and is very uncomfortable when she’s told to take over a pedicure.”

Ashley tells her she also lost her mom and says she can relate to how G is feeling. G wipes her eyes and says she can’t do this anymore. They hug and comfort each other. Today, Ashley is in Maryland working with a cosmetologist. She meets Felisa and she says she’s going to show Ashley how to install a weave. Ashley is panicking because she doesn’t know how to do African-American hair. The client comes in to get her weave.

Felisa has a cornrow base and then she tells her they have to sew it on. She demonstrates then lets Ashley try it but she’s immediately struggling. They hear people talking loudly in another room. Felisa says there is no insulation and you can hear what’s going on in other suites. She tells Ashley to sew the base on in 60 seconds. She totally flops and Felisa shows her what she’s done wrong. Felisa says she’s going to have someone else take over.

They go to talk and Ashley says she’s been a good teacher. She asks Felisa for hints if she was opening her own salon. Felisa says communication is key and says it sucks there. She shows her a dryer she had to buy and says she was supposed to get two dryers but they didn’t deliver. Ashley thinks this is a poor reflection on her business. Felisa says she has two daughters in private school and wants to give them the world. She says after her grandma passed away, she felt like she had no family.

Felisa says her grandma was her idol and she changed after she lost her. She says she hasn’t visited her grandma’s grave because she hasn’t accomplished yet. Felisa says she lets people get in her head and make her think she’s a failure. Ashley says she gets that Felisa is working hard for her kids and is the type of person she wants working with them for a long time. Next is Long Beach, California to work with a hair stylist.

This is Ashley’s last job and she says it’s been very revealing. This is one of their most successful locations. She meets with Richie Roman, a hairstylist. He thinks Ashley looks like a stay at home mom and says this could put his clients off. Richie says he first went to a different suites location and says it was very mom and pop and says he didn’t think it was an appropriate opening. He says he didn’t invite any clients to the grand opening because he thought it would turn them off.

He says they had plastic tablecloths and balloon arches instead of fashionable and trendy things. Ashley says she loves Richie because he takes pride in his work and is very knowledgeable. He says he moved to Georgia two years ago and they had a daughter but then moved back to LA. He says his partner is a full time stay at home parent because their daughter has special needs because she was born very premature. Ashley says her son was a little early.

Ashley says she’s impressed by his positive attitude. He shows her some photos of how tiny his daughter is. He says he’s heading to the homeless shelter after work where he used to live as a child to give makeovers. He asks her to come along and she does. He says this location is great because it looks like a house and not a shelter. Richie tells the homeless women they are the wildflowers of the world and he loves to give them makeovers.

Gina says she wants to make things better to give these people a better place to work. She says this has really changed her perspective in a lot of ways. She’s openly crying by the time they leave. Back in LA, Gina has invited all of the salon professionals for the #BossReveal. They think they are there to get the reality show results. Gina introduces herself to each of them and says she was Ashley and that they were just on Undercover Boss.

They are all shocked. She tells Michele that she made her feel comfortable and she can’t imagine how she’s dealing with being a single mom and having four boys and one with health issues. Gina says she’s giving her $10,000 to help with her son’s health issues. She says she’s also covering the rent on her suite for a year. She tells Michele she likely has no free time and then says she’s bringing her and her family to Hawaii for an all-expense paid vacation. Michele is just bawling.

She says she can’t believe it. Michele says anything that can lighten the load is incredible. They hug and Michele says if she doesn’t have to pay her weekly rent for a while, it’s amazing. She says this doesn’t happen to people like her. Next is G and Gina tells her she knows she has stress over the empty suites in the salon. Gina says they are going to get the space filled and Gina is giving her $5,000 towards buying her supplies.

G tells her that her daughter is graduating in eight days with her Bachelor’s degree. Gina says she’s paying for their graduation cruise. She tells G she puts everyone else first and also says she’s giving her $40,000 to help pay for her daughter’s law school. G is bawling openly and just says wow, that’s amazing. She says for once, her big mouth has no words. She says she never dreamed of this and it’s just amazing.

Gina talks next to Felisa and says she can’t imagine not having the equipment she needs. She says she’s getting her the extra equipment and that they are going back in to try and fix the sound problems at her location. She says she’s bringing Felisa to headquarters to develop their African-American hair product line and they want to name it after her and give her a cut of the products they develop. Next, Gina tells her she knows how hard it is to balance kids and work.

Gina says she’s giving her $10,000 to help her out in general. Then she talks about Felisa struggling to pay her kid’s private school tuition and says she’s going to pay their school costs for two years. Felisa is absolutely floored. Finally, she meets with Richie and tells him she loves that everything about him is fancy. She says she’s giving him $5,000 to host a fundraiser for his daughter to help with medical bills. He starts crying. He says when you grow up the way he did, you don’t like handouts.

She says it’s not a handout. She says she wants him to throw a fancy party for his baby. Gina then talks about her doctor’s appointments and all the driving they do. He says they car share but they make it work. Gina says she’s taking that burden off of him. She says she’s buying him a car and he asks for a moment to regain his composure. He’s crying and trying to calm down. Gina says she can’t imagine losing everything over medical bills and doesn’t want him to have to worry.

She’s also giving him a home up to $250,000 so he never has to worry again. He just cries and cries and says he doesn’t know what to say. He asks her for a hug and says no one has every done anything this nice for him. He asks who does this. He says it’s like a lottery ticket that says he can start over. He says they can dream and thrive instead of just surviving. He goes in crying and tells his husband and daughter they’re getting a home and a car.

His husband is floored. Gina is crying too and says going undercover into her salons has forever changed her life and inspired her. She says it’s all about them and says they make her who she is and is grateful to have all of them. Michele got her vacation and her home fitted for wheelchair access. G’s daughter graduated and they took their cruise. Richie has a shiny new car and the perfect home for his family and Felisa is enjoying her new equipment and opportunities.