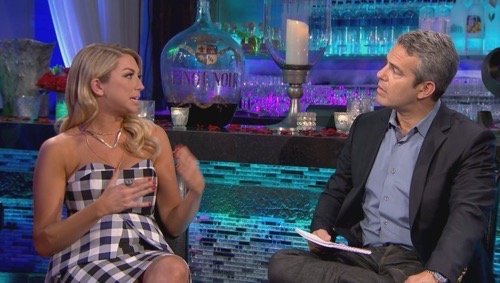 Tonight on Bravo Vanderpump Rules returns with an all new Monday March 16, season 3 episode 20 called, “Reunion Part 2” and we have your weekly recap below. On tonight’s episode, in part two of the Vanderpump Rules Reunion, Lisa and the SUR staff open up to Andy Cohen about their issues with Stassi. Tom Sandoval and Ariana confront Kristen over “Miami Girl.”

On the last episode, when Andy Cohen brought Lisa Vanderpump and her staff together at SUR, Kristen revealed a shocking new friendship, Tom Sandoval defended his fight with James at Scheana’s birthday, Jax addressedhis rumored a romantic past with a man from Miami, and Stassi came face-to-face with Jax for the first time in over a year. Did you watch the last episode? If you missed it, we have a full and detailed recap right here for you.

On tonight’s show as per the Bravo synopsis, “in part two of the Vanderpump Rules Reunion, Lisa and the SUR staff open up to Andy Cohen about their issues with Stassi. Tom Sandoval and Ariana confront Kristen over “Miami Girl,” Tom Schwartz responds to Katie’s six-month marriage ultimatum, and Stassi reveals the real reason she is no longer friends with Scheana.”

Tonight’s episode is going to be another drama packed one, which you won’t want to miss. So be sure to tune in for our live coverage of Bravos’ Vanderpump Rules Season 3 episode 20 — tonight at 10PM EST! While you wait for our recap, hit the comments and let us know how excited you are about the new episode of VR tonight.

Tonight’s Vanderpump Rules reunion kicks off with the cast on stage with Andy. The drama begins with Stassi and Katie’s feud – Stassi explains that she was upset that Katie didn’t reach out to her when she was hurting. Katie reminds Stassi that she cut her off and “deemed her unworthy of her friendship,” and she stonewalled her on her birthday. Katie snaps that unless Stassi’s fingers were broken, she should have picked up the damn phone and called her back. Everyone gangs up on Stassi and tells her that she is wrong – Stassi whines that none of them know the real her.

Katie points out that Stassi changed her life and became a “kept woman.” Schwartz jumps in and tells Stassi that Katie was devastated when she ended their friendship. Stassi apologizes to the group as a whole and says that she is sorry if she said anything that offended any of them – she never wanted to hurt them. Katie reminds Stassi that she called her boyfriend “half weasel and half vagina.” Stassi doesn’t want to hear it, she says that was a joke and not even that serous.

Andy changes the conversation to the ongoing feud between Stassi and Sheena. Stassi lost a bet playing cards and had to go sit with Sheena and her boyfriend. Stassi laughs that she felt like a “half weasel half vagina” then.

Jax is put in the hot seat next, Andy calls him out about his latest tattoo – everyone says that it is Stassi’s face.

Jax argues that it isn’t Stassi’s face, it is actually a hybrid of Carmen’s face. Jax takes off his jacket and shows everyone the huge tattoo on his arm. Stassi scoffs that Jax is “such a serial killer.”

Andy changes the subject to Lisa and Stassi’s fight – Stassi gets called out for calling Lisa an “old woman” in interviews. Before Lisa can even address it Sheena snaps on Stassi that Lisa is the “star of the show” and shouts that Stassi thinks she is better than everyone on Vanderpump Rules.

The drama with Jax and Schwartz comes up, and Andy shares a clip of Jax ranting about how he wanted to get Schwartz to cheat on Katie right in front of her. Katie explains that Jax just had a personal problem with her and was trying to get her out of the picture. Andy asks Katie if she ever cheated on her boyfriend – and she insists that she didn’t. Schwartz did cheat on her in Vegas though and lied and said he just made out with her. Andy asks Stassi if she thinks Schwartz just made out with the girl or if he did more – Stassi confesses she has no idea, there are so many rumors floating around, it is impossible to tell what the truth is.