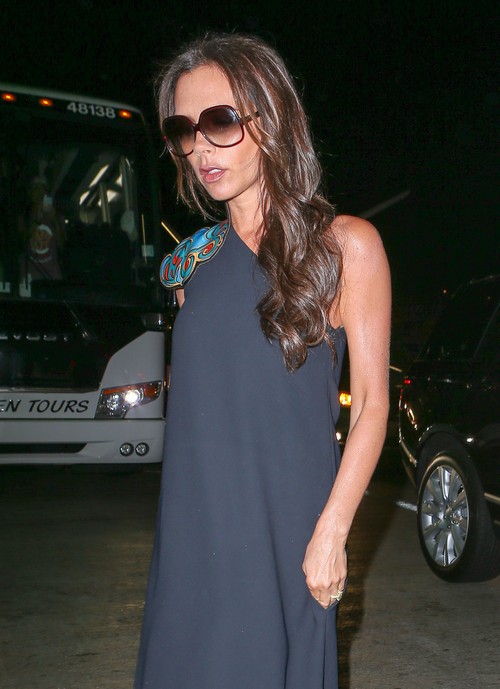 Posh Spice aka Victoria Beckham has always been fit, but in recent years, the mother of four’s frame has become disturbingly skinny. Back in 2001, Beckham admitted in her autobiography, Learning to Fly, that she struggled with an eating disorder. The former Spice Girl has said that she and her band mates were pressured by management to lose weight and this didn’t help her already troubling self-image.

Victoria has admitted to struggling with both bulimia and anorexia, particularly after the birth of her first child. And now, it seems like Victoria Beckham has settled on a disturbing eating habit that seems to be a hybrid of the two eating disorders. OK Magazine reports that the fashion designer has developed a chew and spit habit that sounds absolutely disturbing and disgusting.

A waiter at an LA eatery that Victoria Beckham frequents says that she orders low-cal versions of menu items then chews for a few minutes but then spits out the food in her napkin. Inside sources say that Victoria doesn’t pull her nibble and spit antics in front of her kids but does do it in front of husband David Beckham. The question is, how can the soccer hottie eat watching that go on?

The 5’4” Victoria Beckham is reported to weigh close to 100 pounds which is skeletal for that height. After admitting to an eating disorder in her book published 15 years ago, Beckham insisted that she was done with her dietary dilemma, but it seems obvious that her eating irregularities are far from over. Earlier this year, Posh drew criticism for her bony size 0 frame at a fashion event.

Her cheekbones looked razor sharp at the Alexander McQueen event and her collarbones stood out like a labor camp prisoner. In fact, it looks like what Victoria Beckham has become is a liar-exic. Victoria’s good friend Gordon Ramsay has said that Posh “eats like a horse.” Perhaps Ramsay means that literally – she eats grassy substances and spits them out like cud.

Victoria herself has claimed to eat three meals a day plus snacks but maybe by “eat” she doesn’t mean swallow and digest… And nothing says sexy like a lap full of masticated mush in a napkin. Ick. And who cleans that up? Does Victoria pile them on the table when she leaves so the busboy has to deal with her icky mess?

Or does she shove the pile of them into her latest designer bag making it essentially a $5,000 barf bag? Of course, the chew and spit routine is better than bulimia, but it seems like a form of anorexia…

Victoria and David Beckham have been married for 15 years so maybe he’s learned to look past the crazy. Who knows? But you have to wonder how David Beckham doesn’t mind sitting across from his wife as she spits out expensive food. Maybe because he likes her bone thin – or maybe it’s just something he’s grown accustomed to – like when wives learn to ignore a bumper crop of back hair on their sweetie.