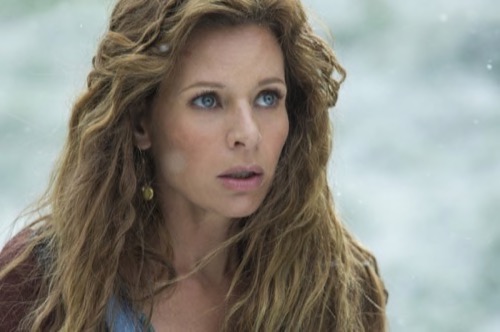 Tonight on the History Channel Vikings returns with an all new Thursday, March 12 season 3 episode 4 called “Scarred.” and we have your weekly recap below. On tonight’s episode, an alliance angers Floki.

On the last episode, King Ecbert visited the developing Viking settlement as the first harvest is sown. Did you watch last week’s episode? If you missed the episode we have a full and detailed recap, right here for you.

Tonight’s episode looks like it is going to be great and you won’t want to miss it, so be sure to tune in for our live coverage of The History Channel “Vikings” at 10:00 PM EST! While you wait for our recap hit the comments and let us know how excited you are for the season 3 episode 4 of Vikings tonight.

Tonight’s episode of Vikings kicks off with Aslaug trying to comfort her and Ragnar’s crying son. She demands to know where Harvard is – Siggy says that she should learn to take care of her own child. Harvard rushes in and rubs the baby’s head – he coos “no more pain,” and he falls asleep. Siggy chases Harvard out of the room and demands to know who he is and why his power is so strong. She asks I he is a God and he replies “I Wish.”

Ragnar and his men are heading back to camp after battle and carrying their wounded. Bjorn carries his beaten girlfriend in to the tent, half of her face is literally gone – she is half awake. Ecbert’s son sits down with Floki and Rollo and tries to “become friends.” Rollo shakes his hand – after he leaves FLoki mocks Rollo for being friends with a Christian.

Ragnar is lying down by the water, Princess Kwenthrith finds him and realizes he was wounded she offers to help him and he lays back down and she pees on his wound. Afterwards Ragnar thanks her and warns him that her brother is weak – and he is going to be her downfall.

Aslaug tries to sneak out of the tent and Siggy catches her – she demands to know why she is leaving her kids again. Aslaug scoffs that she knows Siggy will take care of them. Siggy pleads with her to stay away from Harvard – but Aslaug ignores her and leaves to meet up with him. Harvard walks and explains to her that he has a son named Olaf, and tells a story about his mother who was a nymphomaniac. They slip in to a cabin and he orders Aslaug to take off her clothes. While Aslaug has sex with the mysterious stranger, Siggy sits in her tent watching her kids for her. In Wessex Athelstan finally sleeps with the married woman that has been trying to seduce him – afterwards he tells her that he loves her.

Ecbert and Lagertha are getting dressed – he asks her if she is going to stay at Wessex with him and Lagertha scoffs at the idea. She knows that at the end of the day the only person that Ecbert cares about is himself, and getting what he wants. Unbeknownst to Lagertha, while she is in Essex the man that she left in charge of her village is conspiring to overthrow her, he promises his minions that a man is coming to help him steal back the village.

Siggy is fixing dinner for Aslaug’s kids and they are whining for their mother. She reassures them that Aslaug is with Harvard, she is “making a sacrifice” because Harvard can help the baby. Siggy suddenly “feels frightened” and notices two of the children are missing ¬she hands the baby to Helga, she says she has to find the and runs outside. She finds the two kids standing in the middle of the frozen lake, she rushes out to try and save them and the ice cracks and they fall in to the frozen water. She dives down to save them and can’t find them. A blond woman, (Siggy’s daughter) who appears to be a Valkyrie squeezes Siggy’s hand and appears to reassure her before she dives back underwater to search for the kids again. Siggy saves both of the kids and places them on top of the ice – only the Valkyrie is gone and Harvard is sitting there tending to the children. Siggy nods at Harvard and then slips back in to the water and doesn’t resurface again.

Ragnar and the troops return to Wessex, Kwethrith introduces her brother Bergert to King Ecbert and he welcomes him with open arms. Ragnar asks Lagertha how the settlement is going, she reassures him that she “sacrificed herself for the common good” and Ecbert has ensured their safety. Bjorn tends to his girlfriend in the other room – he has a hard time looking at her face, she cries that he won’t marry her now. He reassures her that he still wants to marry her and kisses her bloody lips.

At the feast King Ecbert pleads with Lagertha to stay – she turns him down. King Ecbert asks Athelstan to stay – and teases that Judith will be sad if he goes. Ragnar overhears and asks Athelstan if he plans to stay, he tells Athelstan that everyone is “free to do as they please.” Judith pulls Athelstan into a dark corner and pleads with him not to leave her. He reminds her that her husband, the king’s son, is back home. Judith cries that she “gave herself to Athelstan” and she doesn’t want him to leave.

Ragnar sits down with Ecbert – Ecbert coos that they understand each other and that is why they are allies and they will remain so. Ragnar points out that the only reason they are allies is because he needed a settlement and Ecbert needed to take control of Mercia. Ragnar asks Ecbert if he is corrupt, Ecbert says “oh yes” and asks Ragnar if he is – he laughs and agrees that he is to.

Floki finds Rollo outside talking to the Gods. Floki says that the gods are angry and they are scared that one day they will have to choose between the Gods and Ragnar. Rollo reassures him that he will never have to make that choice. Inside, Ecbert finds Athelstan sitting by himself. He asks him what he is going to do and Athelstan replies that he is leaving with Ragnar. Ecbert sneers that is “the wrong thing to do.”

At Lagertha’s village, Alcov’s special guest has arrived. He has called Horik’s son to help him overthrow Lagertha. Horik’s son announces that before Ragnar killed Bjork he impregnated his wife. Horik’s son has married Bjork’s wife – so the baby is now his son, and the rightful heir to the village.

At the feast in Wessex Kwenthirth gives a speech and announces that they are going to celebrate their alliance and drink to victory over her abusers. Her brother Agbert cries that he loves her and he has always loved her and takes a drink out of the goblet that Kwenthirth handed him. Everyone watches in awe as Kwenthirth’s brother begins choking up blood and then drops to the floor and dies – Kwenthirth poisoned him. Everyone is silent, Kwenthirth orders them to all “stand and raise their cups to the only rules of Mercia.” They all cheers to the Queen and then dump out their drinks because they don’t want to be poisoned like her brother.

Harvard heads in to Aslaug’s tent, he announces that it is “time for him to be on his way.” He reassures Aslaug that her son will be well – he has taken on some of his pains as well. He tells Aslaug that Siggy is happy now too, and she is with her sons and husband. Before he leaves Aslaug asks him one last time who he is – he replies “just a wanderer” and then puts on his hood and wanders out of the tent. Helga rushes to the door and watches him disappear in to the fog.