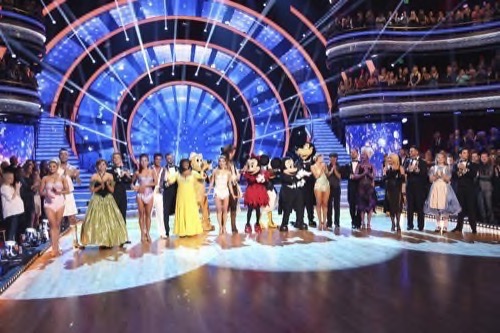 Dancing with the Stars 2015 will be returning tonight for its 6th episode of season 20, and unfortunately that means we’re going to have to say goodbye to another amazing duo. On tonight’s episode the eight remaining couples will celebrate the season with individual routines to a variety of spring break inspired songs plus a competitive team dance performance.

For the team dances, the cast has been divided into two groups, #TeamTrouble and #TeamYOLO. The teams will compete in a dance-off, vying for a perfect score from the judges. At the end of the night, one couple will face elimination.

After last week’s performance at the top of leader board are Rumer Willis and Valentin Chmerkovskiy who danced the Rumba to The Little Mermaid’s “Poor Unfortunate Soul.”  [VIDEO HERE] At the bottom of the leaderboard is Robert Herjavec and Kym Johnson who danced a Quickstep to “Step In Time.”  [VIDEO HERE]  But we all know on DWTS scores don’t really mean anything when it comes to voting.

Without further ado, it’s time for you to tell us who you think will be saying adios to Dancing with the Stars season 20. Simply use the poll below to cast your vote! Who’s going home? Will it be . . . . Noah and Sharna; Robert and Kym; Patti and Artem; Nastia and Derek; Riker and Alison; Willow and Mark; Chris and Witney or Rumer and Val? To check out each couple’s performance, as well as their scores/current standings, CLICK HERE.