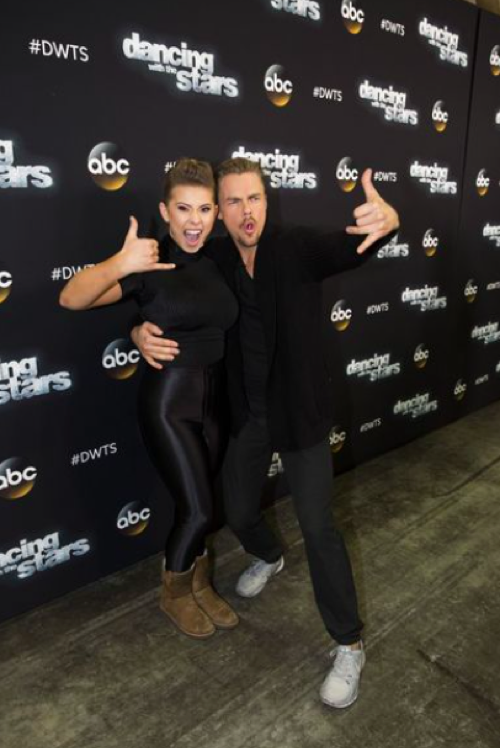 Last night on ABC’s Dancing With The Stars 2015 the four remaining celebs battled it out with 2 more dances.  The  first a dance they previously did and the second a fan favourite super sized freestyle.  The couples brought their A game because the competition is fierce and anyone can still win. By the end of last evening Carlos PenaVega and his partner Lindsay Arnold were sent home.

On tonight’s final episode the three remaining contestants: Bindi Irwin; Nick Carter and Alek Skarlatos will battle it out one last time and by the end of the evening the winner of DWTS Season 21 will be crowned. Did you watch last night’s performance show? We did and we recapped it for you, HERE! Did you miss any of last night’s  performances? If you did we have all the videos HERE for your enjoyment!

After last night’s performances, at the top of the leader board were Bindi Irwin along with Nick Carter and with a 30/30 and on the bottom of the leaderboard is Alek Skarlatos with a 27/30. The competition is really tight this season and it is anyone’s guess who will take the Mirror Ball trophy.

On tonight’s episode per the ABC synopsis “There will be live dancing and show-stopping performances at the Grove shopping center and in the DWTS ballroom. The night begins with an exhilarating number, featuring a reunion of all 13 of this season’s couples at the Grove, with performances from Alexander Jean, Andy Grammer, Chaka Khan, Elle King and Nick Carter. Eliminated contestant Kim Zolciak returns to the ballroom to dance a Samba with Tony Dovolani to “I Dream of Jeannie,” along with encore dances from the eliminated celebrities.

The cast of the upcoming “Dancing with the Stars: Live! Dance All Night Tour” will perform a dance to Avicii’s “Broken Arrows”. Then, the three finalists will each dance a repeat dance from this season. In the last element of competition, the couples will perform a new routine that’ll be part of the “24-Hour Fusion Challenge.” The remaining couples will fuse two contrasting dance styles that they’ve performed this season and they’ll have less than 24 hours to prepare that dance for judges’ points BEFORE the mirrored-ball trophy winner is announced.”