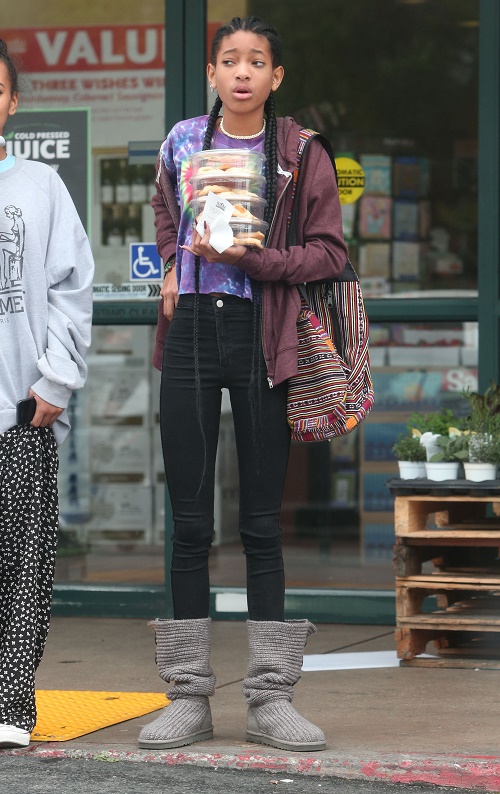 Willow Smith has some wonderful parental influence, as exemplified by her whipping her hair back and forth, dating boys double her age, and drinking and partying at the young, young age of 14. You’d think that Will Smith and Jada Smith would do a better job of keeping Willow under control, especially considering her early fame and her older boyfriend. Plus, she hangs out with the famewhore reality TV crowd in Hollywood, just like her brother, Jaden Smith. And since the Scientology snipers can’t take them out, it’s Will’s and Jada’s responsibility to keep their daughter stable – and they are doing a terrible job.

According to Naughty Gossip, Willow has been caught buying weed and possibly weed paraphernalia in NYC’s Greenwich Village. A source tells Naughty Gossip, “Her parents think she is cool. They say she knows right from wrong and let her live her life.”

Really? Because to us, Willow Smith is a 14-year-old girl who’s trying far too hard to be cool. Smoking weed at 14 years old, and worse, buying weed at 14 years old, is ridiculous. But then again, this is the same girl that dated a 20 year old when she was still a pre-teen, so that shows you how much good judgment she has. Her parents might be too busy to look after her and prevent her from getting into all of this, but they should have known better than to keep Willow around the Hollywood scene when she’s incapable of making good decisions – and that was fairly obvious after her boyfriend shenanigans.

What do you guys think about Willow Smith buying weed? Do you think she should be held responsible, and do you think Will Smith and Jada Smith have any idea what their daughter is getting up to behind their backs? Let us know your thoughts in the comments below.