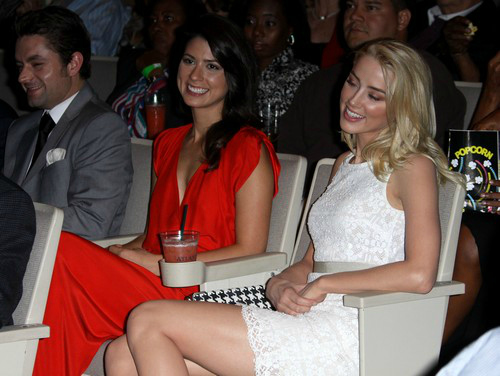 TMZ found arrest records from September 2009 that show Amber Heard was arrested for assault against her domestic partner Tasya van Ree. According to reports, Tasya called the cops after Amber grabbed her arm and struck her.

Amber was arrested for misdemeanor domestic violence, had a mug shot taken, and had to show in Seattle court for the arrest at the Seattle-Tacoma airport. Because the couple lived in California, the case didn’t move forward.

Of interest is that audio shows Amber was called “Amber van Ree” by the court clerk because she had her name altered to match Tasya’s. In the name change docs, Amber listed the reason for the change as “domestic partnership.”

They added that “Amber van Ree” must notify the court if she moved within that two-year period. Amber meekly said “yes your honor” and “no your honor” when prompted. Amber reportedly considered herself married to Tasya van Ree.

But back when the two settled down together, same-sex marriage was not yet legal in California – that’s why Amber had her name legally changed to match her photographer sweetie’s moniker the year prior to the alleged attack.

We wonder if Amber left her “wife” the same time Johnny Depp left his domestic partner Vanessa Paradis. Amber and Johnny met while filming The Rum Diary which began production in March, 2009.

The alleged attack by Amber on her partner was in September 2009 and there were rumors of on-set romance between Amber and Johnny. Could Amber have been fighting with Tasya van Ree over her antics with Johnny Depp?

To further complicate things, in 2011, Tasya and Amber held a civil wedding ceremony in New York while rumors of a secret romance between Johnny Depp and Amber were heating up.

Three months after Johnny and Amber got engaged, the actress requested her last name be restored to Heard. There is also talk that Amber has remained close to her ex Tasya and rumors swirled that Amber’s marriage to Johnny was about her career .

Also, one of the dogs that Amber and Johnny got in trouble for sneaking into Australia, and which Amber asked for her protective order to include, is a tiny Yorkshire Terrier named Pistol that was a gift from her former “wife” Tasya.

Amber Heard has accused Johnny Depp of having “a short fuse” and a temper that is “exceptionally scary” for me. One has to wonder if that’s how Tasya van Ree might describe Amber Heard.

Johnny Depp does have an arrest on his record, but it was anything but domestic. Depp was arrested in the UK for threatening paparazzi who hassled him and baby mama Vanessa Paradis but there was no physical contact and no charges were filed.

What do you think? Does Amber Heard’s own domestic violence arrest throw shade on her accusations against Johnny Depp? Share your comments below and check back with CDL often for all the latest celebrity news, scandal and gossip.