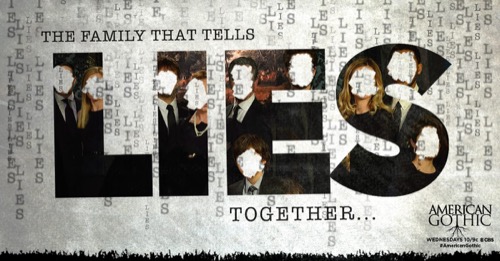 Tonight on CBS American Gothic airs with an all new Wednesday, July 20, season 1 episode 5 called “The Artist in His Museum,” and we’ve got your American Gothic recap down below! On tonight’s episode, Cam (Justin Chatwin) suffers hallucinations that impact his role in a crime.

On the last episode, Detective Brady got a lead on the “Silver Bells Killer” after a death on the Hawthorne property. Did you watch the last episode? We’ve got your detailed American Gothic recap down below!

On tonight’s American Gothic as per the CBS synopsis “Cam suffers hallucinations that impact his role in a crime and Madeline receives a cryptic message.”

American Gothic airs tonight at 8pm with an exciting episode, we will be live blogging the show with all the up-to-the-minute details so make sure to come back to Celeb Dirty Laundry and check out our live American Gothic recap. Can’t wait to see how all the drama plays out, how about you? Are you excited for this new show? Hit up the comments down below!

The late Gunther has been ruled out as a suspect in the Silver Bells killings so the police were once again looking at the Hawthorne family tonight’s episode of “American Gothic” and unfortunately Cam looked like their best suspect.

Cam had access to the murder weapon that was used on the last victim and he also had access to the Hawthorne construction site where the murder weapon had been hidden these many years. So the fact that he was close to so many aspects of the case and that he had the means to pay off Gunther to take the fall was what made him the police’s best suspect. But the saddest part about whether or not he was guilty was the part that not even Cam knew if he killed anyone. Cam is sadly a drug addict and to this day he continues to relapse so there were plenty of times that he wasn’t aware of what was going on. Or who if not what did he see. And so Cam couldn’t even help towards his own defense.

His family, on the other hand, were doing everything in their power to keep from going to prison. Including his brother-in-law Brandy, that was working the Silver Bells case. Brandy had apparently found Cam not long after the other man had a bust-up with a drug dealer. So he had taken Cam back to the Hawthorne house and had warned him that the police were looking at him again so he shouldn’t be taking such risks. However, Cam’s sister and Brandy’s wife had been at the house so she had assured her husband that she would look after Cam. And that she would also try to keep him out of trouble, but Cam’s demons ended up winning out and Cam had taken some of the drugs that he had hidden at the house.

So Cam had gotten high just when everyone needed him to be at his clearest and his drugs hallucinations had truly messed with his head. Cam had thought that he was seeing silver bells everywhere and at one point he also thought that his younger self-was talking to him. Yet, while that had been the drugs obviously crewing with his psyche, there were a few things that his hallucinations kept on revealing to him.

Sometimes Cam would hallucinate his younger self or his dead father however they would all try to mention the body. The same body that Cam had once mentioned during his therapy sessions and that may have even been linked to his drug addiction so that’s what Cam tried to focus on.

Cam wanted to figure what his hallucinations were trying to tell him about the body though his siblings were of a different opinion. Everyone and that meant Garrett as well had just wanted Cam to sober up. The police have tried calling Cam and they had also trying visiting his apartment in order to get touch with him.

So Cam’s family wanted him to get clean as fast as possible just so he wouldn’t hand the police probably cause to arrest him. Though as they were helping him clean up, Tessa had to go leave to pick up their nephew so she had asked their sister Alison and their brother Garrett to watch Cam while she was gone. And she had asked that despite it being a well-known fact that Alison and Garrett didn’t like each other.

Although, that hadn’t always been the case with the siblings. The two used to be close and their childhood had seemed idyllic though Alison has been on edge since their brother came back after having been gone for nearly twenty years. So she finally confronted him after Tessa left. Alison said that she couldn’t be like Tessa who was willing to forget everything and welcome him back into the family like nothing happened so Alison had wanted answers.

She had wanted to know where he’s been and what he had been doing. And Garrett had managed to put off with another one of his ambiguous answers that told her that he had to go if not why he felt that way.

So Alison didn’t get the answers she wanted and yet she couldn’t fight him over it or stay on at the house after she got word that the police had showed up at her election offices. The police were apparently willing to use whatever dirty trick they could find to get answers from the family so that had tried staking out Alison’s office and later they had even tried talking to Cam’s son Jack.

Jack was a bit unusual so there was no telling what he might say to the police. But it had been them that had seemingly gone too far when they threatened to take Jack away from his father. The police told Jack that he should tell them things because it would be sad if his dad got into trouble and lost him so that had truly frightened the kid. And so he had told his aunt Tessa about.

Jack had wanted to know if what the police had been true so he asked his aunt however Tessa didn’t know if it was and the police were scaring even her with the things they said. So that’s when Tessa had had enough. Tessa had called her husband and she had told him that he could use Cam’s needle that he found to run a DNA analysis.

The police had found DNA on the murder weapon that didn’t match the victim so they believed that it belonged to the Silver Bells Killer. However, they couldn’t rule anyone out until they had Cam’s DNA so Tessa decided to go against her family’s decision and grant Brandy the permission he needed.

Tessa had given her husband permission to run a DNA test because she truly didn’t think that her brother Cam had killed anyone much less secretly be a serial killer. Yet, that had been a quite a gamble on her part because again Cam didn’t know if he had killed someone. Cam was still having hallucinations at the house and over time certain things became clear.

He saw a body getting dragged the main staircase in his family’s mansion so he thinks that someone might have been killed in the house although he couldn’t remember who was dragging the body. There would be times when he would see himself dragging it and at others it would be either his father or his brother. So Cam has no idea what he saw or if he was real.

The only thing that made him believe it could be real was the recording he found of an old therapy session. Though Garrett decided to speed up the recovery process by going to his veterinarian friend who Garrett had looked like he wanted to strangle. So it seems that Garrett managed to control himself in order to get what he needed for Cam.

He got Cam a medication to help him with his symptoms and that had helped Cam begin to feel better as well as come to terms with what he saw. And so Garrett had handled the Cam problem meanwhile Alison had fixed her issues back at the office.

There had been an intern at Alison’s office that had seen her kissing someone that was not her husband or even a man. So her second-in-command Naomi had taken care of things. Naomi had framed the intern for an information breach and that had given Alison’s ground to fire the intern without anyone believing her if she ever told her story. And so with that fixed and Cam getting better, it had looked like they were finally out of the red zone and hadn’t needed their mother there after all, to fix everything for them.

But their mother hadn’t left to teach Cam a lesson. She had secretly gone to see her own mother who was an alcoholic that basically ran scams and extort money from Madeline to pay for everything. So Madeline had only left town because she needed to give her mother the money she needed to stay away from the rest of them and it was only when she came back that she found out how much they were in trouble. Or that Cam was a suspect again however she didn’t need to worry about Cam because his DNA wasn’t a perfect for the killer.

And yet it had been a familial match so it turns out that Tessa helped prove that Cam was related to the killer.