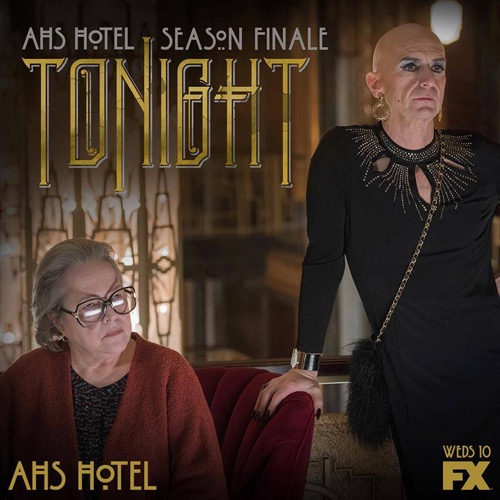 Tonight on FX our favorite creepy drama American Horror Story: Hotel airs tonight with an all new Wednesday January 13, season 5 finale called “Be Our Guest,” and we have your weekly recap below. On tonight’s episode, in the season five finale, a new era begins at the Cortez under Iris and Liz.

On the last episode, Liz Taylor and Iris shot at Elizabeth and Donovan, and Elizabeth escaped while Donovan lay dying. Iris and Liz moved him outside the hotel to die, so he would not be trapped inside. Elizabeth ended up with Hypodermic Sally who pulled out the bullets and also revived her using blood from the towheads. Sally then reminisced about an old drug dealer of hers as well as a couple of musicians who were good to her in the 1990s.

Iris and Liz discussed freeing Ramona as a weapon against Elizabeth. Ramona confronted Elizabeth, but Elizabeth convinced her old lover for one more round of sex and then she would let Ramona kill her. John’s final kill was “Thou Shalt Not Commit Murder”, and he presented Elizabeth’s head as a trophy to James March. Did you watch the episode? If you missed it we have a full and detailed recap right here for you.

Tonight’s episode of American Horror Story: Hotel kicks off with the newly renovated Hotel Cortez – which is being ran by partners Iris and Liz Taylor. The rooms look amazing, a couple checks in and raves about their room – until they find Sally sitting in it and getting high.

Sally tells the couple that they can clean up the hotel and buy new furniture, but they will never be able to get rid of the pain. Then she stabs the man in the heart with a syringe full of heroin – he falls to the floor and starts foaming at the mouth. His girlfriend runs out of the room screaming, and bumps in to Will Drake. She thinks he has come to rescue her, but instead he kills her too. Iris an Liz Taylor are not impressed when they find their guests’ dead – Liz announces it is time to have a meeting with the ghosts in the hotel, because at this rate they are never going to get a five star rating.

Liz and Iris hold a meeting in the lobby with all of the hotels’ ghosts – they are in charge now, and they want the ghosts to stop killing the guests. Liz says that they are trying to build a real business, but if people keep disappearing after they check in, it’s not good for business. Sally laughs that she and Will are the only ghosts killing the guests and they aren’t going to stop.

Mr. March shows up at the meeting – and shockingly he is agreeing with Iris and Liz. He wants the killing to stop. If the hotel goes belly-up, the all of the ghosts won’t have anywhere to live. March shouts at the ghosts that if the hotel stays open for 100 years then it will be a historical landmark, and no one will be able to tear it down. March threatens Sally, and reminds her of what happens when she disobeys him.

After the meeting, Iris has a heart to heart with Sally. She gives her a smart phone and tells her about social media – just because she can’t leave the hotel doesn’t mean that she can’t be a part of the world outside. Sally got so caught up in her new life that she was living via Twitter and Facebook that she actually turned over a new life – and even gave up the heroin and killing people. Meanwhile, Liz Taylor gets to work on Will Drake. He is depressed that he has been dead for over a year – and no on cares about his fashion line any more. Liz reminds him that he doesn’t have to be dead – no one ever found his body, he is just missing, he could still sketch and release new designs.

Since Liz can leave the hotel – she heads to a board meeting at Will Drake’s office with a signed document giving her total authority to speak on Will’s behalf. She announces that the fashion house is going to undergo a bit of a “rebirth.” Will remained in hiding, and began cranking out new designs which were only shown at the Hotel Cortez – and the ghosts were the ones modeling the new clothes. Of course, all cell phones and cameras were banned from the shows.

Liz Taylor continued to work for Will Drake – but she wasn’t feeling complete because she desperately missed Tristan. Iris brought in a professional psychic named Mrs. Howard to help Liz communicate with the dead. The psychic sets up shop in one of the hotel rooms, Iris and Liz join her in hopes of being able to contact Tristan. Mrs. Howard says that she can sense Tristan’s spirit. She tells Liz that Tristan has been at the hotel all along, he just doesn’t want to talk to Liz. Tristan blames Liz for his death. Mrs. Howard also gets a message from Donovan for Iris, says that he is in a beautiful place and gets to eat pancakes every day.

Liz Taylor was devastated by getting shut down by Tristan’s spirit. But, he found a new love in his newborn granddaughter Isabelle. Liz’s days with her granddaughter were numbered though – after Isabelle died Liz was diagnosed with cancer. Liz held a meeting with all of the ghosts and told them the horrible news, she has prostate cancer and it has spread to her spine and is untreatable. Liz tells the ghosts that she wants them to kill her so that she can be reborn and live with them in the Hotel Cortez forever – they are her family and she wants to live with them forever. Sally hugs Liz – and then they all pick up knives, guns, and needles and prepare to murder Liz.

Right before Sally is about to stab Liz in the heart with a syringe, the door opens and the Countess marches in. It has been over a year since anyone in the hotel heard or seen of her. She announces that Liz was always her “fondest creation” and she wanted to be there for her transition. Liz lie down on the bed and the countess proceeds to slit her neck and kill her.

A few hours later Liz is standing over her own dead body and chainsmoking – and in walks with Tristan. He tells Liz that he loves him, he just didn’t want Liz to stop living his life. Liz chuckles and tells Tristan that he was “worth dying for.”

Fast forward to Devil’s Night, 2022 – Mrs. Howard is filming her psychic TV show in the Hotel Cortez. Iris doesn’t like it, she is attracting the wrong kind of attention to the Cortez. John Lowe arrives – apparently he is a ghost now too. On Devil’s Night – Mrs. Howard brings in her camera crew to try and contact John Lowe’s spirit in Room # 64. John makes an appearance – of course he can’t be saw on camera, but Mrs Howard can see him.

Mrs. Howard wants to give John a chance to tell his own story. John went on a killing spree so that he could feed Alex and their son. But, the police were searching for him – so they went back to live at the Cortez where they would be safe. John and Alex sent Scarlett away to a boarding school where she would be safe and could live a semi normal life. One night while he was out killing, the police tracked him down and shot him in front of the hotel. He crawled inside the doors as he was dying so he could be reborn.

John Lowe takes the psychic on a tour of the hotel – and to John March’s room for Devil’s Night where all of the serial killers come back for one night and a ritual killing. Just like the first time John Lowe went to the party – Mr. March offers everyone some absinthe. The Zodiak Killer, John Wane Gasey and the rest of the murderers threaten to kill Mrs. Howard if she doesn’t leave the Cortez and stop filming the TV show. Mrs. Howard agrees and runs off screaming in t the night.

Devil’s Night is the only night that John Lowe can return after the party he heads to the hotel room where Alex is sleeping with their son. His daughter Scarlett is waiting for him and she’s an adult now. John gets in to bed with his family – he whispers to Scarlett that he is afraid to go to sleep because when he wakes up, he won’t be able to see his family for another year.