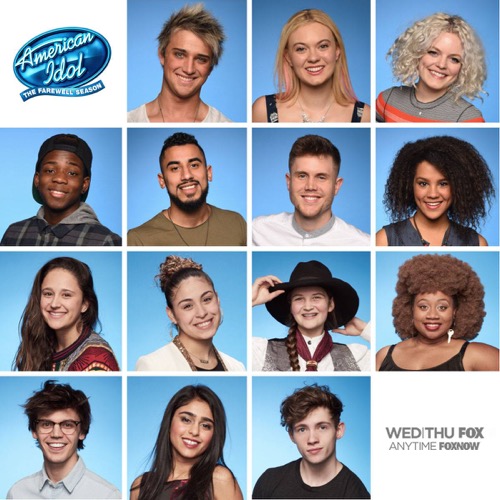 It’s another exciting night of American Idol on FOX with an all new Wednesday February 24, season 15 episode 15 called “Wildcard Night: Judges Pick” and we have your weekly recap below. On tonight’s episode, the judges reveal the first eight semifinalists to advance into the Top 10 in a “Wildcard Night” edition.

On the last episode, IDOL fan favorites returned to mentor and perform, as the judges voted on the second showcase and five contestants were sent home. Find out who advances to the Top 14 in the quest to become the final IDOL. Did you watch the last episode? If you missed it, we have a full and detailed recap right here for you.

On tonight’s episode as per the FOX synopsis, “after proving themselves alongside IDOL legends, some semifinalists will reach the end of their journey. The judges will announce the first eight semi-finalists to make it into the Top 10, leaving six to sing for America’s vote and the final two spots in this farewell season’s Top 10.”

Tonight’s show is going to be an exciting one, which I’m not going to miss and neither should you. Tune in tonight at 8 PM EST! Celeb Dirty Laundry is your go to place for all the up-to-date American Idol News and we’ll be recapping the episode right here for you. Do you have a favorite to win? Hit up the comments and let us know who you really like!

It’s Wild Card night tonight on American Idol. The judges, Jennifer Lopez, Keith Urban, and Harry Connick Jr take their seats. Ryan Seacrest brings out the Idol Top 15 to the stage. The judges have decided to give out for fast passes – straight to the Top 10. Dalton, Olivia Rox, Trent, and LaPorsha are all given fast passes, they are safe tonight and in the Top 10.

The first person to sing tonight will be Manny Torres, he hits the stage and sings “Master Blaster” by Stevie Wonder. Afterwards the judges let Manny know what they thought.

Keith Urban critiques, “That’s a great way to open the show. I love that song, I don’t know if it was the right song for you. I will say is what I like about you is you have this fighter spirit and such an energy when you perform, and I thought you delivered that tonight.”

Gianna Isabella is up next, she takes the Idol stage and sings, “I Put A Spell On You” by Annie Lennox. After Gianna’s performance, Jennifer Lopez critiques her, “I love to watch you, we were all just surprised by your sassiness. You can tell there are the beginnings of an amazing performer, artist, and singer. We didn’t all agree on everything, but I believe that you belong in the top ten.”

Thomas Stringfellow is up next, tonight he is singing a rendition of “Story Of My Life” by One Direction. After Thomas’s performance, Harry Connick Jr lets him know he did. Harry explains, “I think that you are very talented and this was a good song for you. There is a big difference between an idiosyncrasy and a bad habit – you got to step cracking every note at the end of words, unless you’re the lead singer for Cherry.”

Tristan McIntosh takes the Idol stage next and sings Rascal Flatts’ hit song “What Hurts The Most.” Afterwards Keith Urban raves, “That was a beautiful song choice for you to do. But, the way you did it, I really felt like it was a side to you we hadn’t saw yet.” Jennifer Lawrence shouts her agreement, and Harry Connick Jr nods his approval.

Up next is Avalon Young, she heads up on the American Idol stage and sings “Excuse Me Miss” by Chris Brown. Jennifer Lopez loved Avalon’s performance, after Lopez comments, “That was something Avalon! You are getting more and more comfortable up there, that was smooth like butter, that’s what I kept thinking the whole time! Something that belongs in the top ten, but we’ll see what America thinks.”

Jenn Blosil sings for the American Idol judges next, she performs a rendition of “True Colors” by Cyndi Lauper. After her performance Harry Connick Jr comments, “I knew you had it in you. I had a problem last week with “My Funny Valentine” because I wanted you to sing it like you sang this. In my opinion that was delivered flawlessly.”

Lee Jean is the next contestant to sing tonight, on the Idol stage Lee performs, “Make It Rain” by Ed Sheeran. Keith Urban critiques Lee, “You know what I like is you have your own style, it’s chill, like walking on an Easter beast. You had a lot of nerves going tonight, but in the midst of that, I like what you are doing.”

The next contestant to take the stage is Sonika Vaid – she performs a rendition of “I Surrender” by Celine Dion. Jennifer raves, “Wow people came to sing tonight, I guess they want to be in the top ten. I don’t think I have ever got gooseys on my face – that was a first time – I felt it in my cheeks! The way your voice sits in the music, it’s so out of this world!”

Jeneve Rose Mitchell is up next, she brings Johnny Cash’s “Burning Ring Of Fire” to life on the American Idol stage tonight. Harry Connick Jr. comments, “What is interesting to me about your talent is that it is compelling, interesting, and even a bit polarizing. Some people might not get it, but I hear things in your voice that I get.” Keith adds, “You need to let go – that’s when you shine.” Harry closes with, “You are a very talented young lady.”

The final singer to perform tonight is Mackenzie Bourg. Mackenzie sings an original song he wrote himself called “Roses” for the Idol judges. Keith Urban comments, “That is such an amazing song, and it must be an amazing thing to see people reacting that way to YOUR song. You sang great and you played great.”

That’s all for American Idol tonight, you can head over to the official American Idol website to vote your favorite performance of tonight.