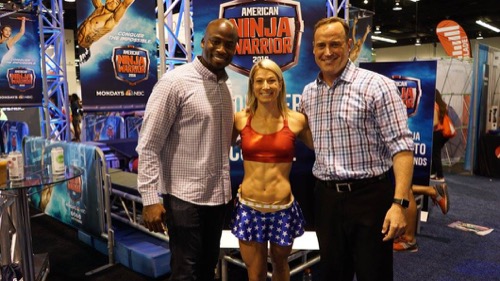 On tonight’s episode per the NBC synopsis, “Philadelphia, PA will host the last qualifying round where competitors tackle two new obstacles including, Wall Drop and Rolling Thunder. Ninjas will compete to qualify for the finals in Las Vegas and a shot at winning the grand prize of $1,000,000. Veterans Joe Moravsky, Jamie Rahn, Ryan Stratis, Michelle Warnky and Geoff Britten return. Competitors in this rigorous obstacle course competition series will vie for the title “American Ninja Warrior.”

#AmericanNinjaWarrior is at the Philadelphia Qualifier tonight. Matt and Akbar make the introductions then bounce it to Kristine for a look at the course. First up is Floating Steps, then the Log Grip, Paddle Boards, Wall Drop and new obstacle Rolling Thunder then the Warped Wall.

Clint Sarion is up first and he’s a brain tumor survivor. He’s still running and now faces the fourth obstacle which is new. He makes it up the first part and then does the bounce but falls when he can’t hold on to the giant hangers. He’s still smiling, though.

The first lady of the night makes an impressive run

Next is Rachael Goldstein and she is an occupational therapist and works with teens who have physical and mental challenges. The rookie has been training with Jamie Rahn who is there to cheer her on. She only started training four months ago.

She hops the steps and makes the dismount. The Log Grip is tougher on women and she nails t then moves on to the Paddle Boards. Now she’s at the new obstacle, the Wall Drop. She does it. Now she’s onto the Rolling Thunder. She finally falls but had an amazing run.

Three ran on the break. Tyler Stroud fell off the Log Grip. Alexi Matousek went out on the Paddle Boards. Faris Xero and then fell completely off the course at the Wall Drop. Ballet dancer Keegan O’Brien is next and talks about how physically hard that ballet is.

Keegan starts and runs the steps easily. Now it’s the Log Grip. He hits hard but makes it. Surprisingly, the Paddle Boards take him out which shocks Matt and Akbar.

Local guy Najee is first finisher of the night!

Next is Najee Richardson who grew up in a rough area of Philly. His parents put him in gymnastics.

Then his last year of high school, he blew his knee out. Then he started training to be a Ninja Warrior. He lands the steps and moves to the Log Roll. He beats that too and moves to the Paddle Boards, leaping over the last one. Now it’s the Wall Drop.

He conquers that and moves on to Rolling Thunder. He stops to dangle from one arm and sticks out his tongue then starts moving again. He barely lands the dismounts and the crowd goes nuts for the local boy. He preps to run the Warped Wall. Najee is the first finisher of the night 2:54:53.

On the break, three ran. Caroline Ramsay fell off the Log Grip. Mike Shuk tumbled off the Wall Drop. 57-year old Miles Avery was taken out on Rolling Thunder. Next is Logan Broadbent who is a world-class boomeranger.

He’s number one in American and the world trick catch champion. Logan conquers the steps and the Log Run. Now it’s the Paddle Boards and he runs right past them. Now it’s the Wall Drop. He is stuck and struggles but beats it.

Now it’s Rolling Thunder. He tries it with his forearms and then tumbles right off. Rookie Alyssa Beird is on the course back from the break. The teacher has a gymnastics background and easily conquers the first three. She beats the Wall Drop too.

Now it’s the Rolling Thunder. She almost tumbles as it drops. She gives a thumbs up and keeps going. She survives the next drop too but then struggles. She finally falls but did well on the fifth obstacle.

Next up is Akiva Neuman who is studying to be a rabbi. He competes with a yarmulke on. He struggles but makes it past the first three obstacles with a struggle and then faces the Wall Drop.

He gets stuck after the transition and then finally falls and makes a splash. On the break, three more ran the course. Hula hooper Dayna Fischer fell off the steps. Mike Meyers ran last year as a top rookie but this year took a spectacular tumble on the Wall Drop.

Dr Richard Shoemaker went out at the very end of Rolling Thunder on a great run. Next is firefighter Anita Daniel from NYC. She’s a single mom and firefighter. She moves on to the Log Grip and gets past it. Her daughter watches as she runs and falls off the Paddle Boards when her feet got tangled.

John Gowder Jr is up next – he’s an electrician who went into the family business. His dad has MS and is stick in a wheelchair. He and his wife moved in to help his parents. He says his father turned on Ninja Warrior and loved it so he decided to try it.

John hops the steps and moves to the Log Grip. That one is easy enough and then he runs right past the Paddle Boards and takes on the Wall Drop. He almost falls on the dismount but scrambles up and over and moves on to Rolling Thunder. He falls but has a fast time so he still might make it to the finals.

Next is 64-year-old John Loobey who comes out with a walker but then does lifts off it. He calls himself the #GeriatricNinja. He trains on his farm in Tennessee. He says he saw Ninja Warrior on TV and decided he can do it.

He runs the steps nimbly but struggles to land the dismount. He’s the oldest competitor ever. He rolls up his flannel PJs and takes his shirt off for Log Grip. He kills it and the crowd goes wild. Now it’s the Paddle Boards. He falls right at the end. Bummer.

Next is Geoff Britten, the first man to climb stage four in Vegas but lost to Isaac Caldiero’s slightly faster time. He easily beats the steps and then the Log Grip like he’s out for a stroll. Now it’s the Paddle Boards and he had a close call but moves on.

Now Geoff moves to the Wall Drop and struggles a bit on the dismount. He heads for Rolling Thunder. He’s moving fast and nails the dismount. Now it’s the Warped Wall. He hits at 3:39 after missing the button on his first slap.

On the break, Aliannah Hunderfund fell on the Wall Drop. Dan Liburd works for the NFL and he was taken out by Rolling Thunder. Veteran firefighter Mike Bernardo dipped a toe in the water at Rolling thunder.

Jesse Labreck is a full-time nanny who cares for a 20-year old girl with CP. Emmaline, the girl she cares for, says Jesse will crush the course. Emmaline is there to watch her run. #FlexLabreck starts her run and kills the steps and Log Grip with ease.

The Paddle Boards are smooth run for Jesse and now the Wall Drop and she soared so high offer her jump. Now she faces Rolling Thunder. She drops to one hand and recovers but then gets stuck. Jesse finally falls.

Jon Alexis Jr is up next. The 6’6” guy speeds through the first two obstacles and then runs past the Paddle Boards. He clears Wall Drop fast and moves to Rolling Thunder. He gets stuck close to dismount and then swings and lands.

Now the Warped Wall and he slaps the buzzer at 1:51:08 for the fastest finisher so far. Next up is veteran Ryan Stratis who competed in all eight seasons but had a big injury to recover from. He had t have shoulder surgery.

He’s only had one month to prepare after physical therapy. He starts his run with the steps and gets past those and heads for Log Grip. He rips past it but his shoulder his bothering him. He gets past the Paddle Board. He’s at Wall Drop and muscles past a dismount issue.

His shoulder is hurting. Now he’s on Rolling Thunder and he moves fast on it. He struggles for a dismount and nails it and runs the wall. He slaps the buzzer at 4:29:12. He roars at the end but it was a struggle.

On the break, Chris Wilczewski ran and fell on Rolling Thunder. Jamie Rahn took it to the wall and hit the buzzer and cancer survivor Greg Smith fell on the Paddle Boards. Anthony DeFranco, another teacher and pal of Greg’s runs next.

Anthony was by Greg throughout his cancer ordeal and he’s been cancer free since 2011. They started Ninja training together. Greg cheers while Anthony runs. He runs past the steps and Log Grip. Then the Paddle Boards are easily done.

Anthony moves to Wall Drop and then Rolling Thunder. He’s zooming and the rookie dismounts and runs the wall and slaps at 1:44:37 to takes the fastest time from Jon Alexis and they give him the PPOM wonderful run of the night.

The Weather Man is a new dad!

Joe Moravsky is up next and the weather man is ready to do his thing. He just had a baby – his wife was pregnant when he ran in Vegas. He’s got a daughter at home and says he’s been so tired and it’s hard to get back to training.

Joe starts his run – he’s hit the buzzer three years in a row. He runs past the first two obstacles like they are nothing then right past Paddle Boards and to Wall Drop. He’s moving fast. Now he’s on Rolling Thunder but is fast he’ll make City Finals no matter what.

Joe runs the wall and slaps the buzzer right at two minutes. What a great run for the new dad.

The ladies break records at the close

Sami Newton went down at the Log Grip. Brian Keane also went out on Log Grp. Abel Gonzalez hit the middle beam on Paddle Boards and went out and that allowed three women to move on to the City Finals and that is a record broken.

Michelle Warnky is next and we get a look at her new training gym and her debut as a gym owner. Michelle runs it with Jessie Graff watching. This is her fourth year at ANW. She moves to Log Grip and then Paddle Boards. Michelle moves on to Wall Drop.

That’s easy and now it’s Rolling Thunder. Her time to get there is fast enough to put her into the City Finals and that means four women will move on the Philadelphia City Finals. She falls before the third drop but will be at the Finals.