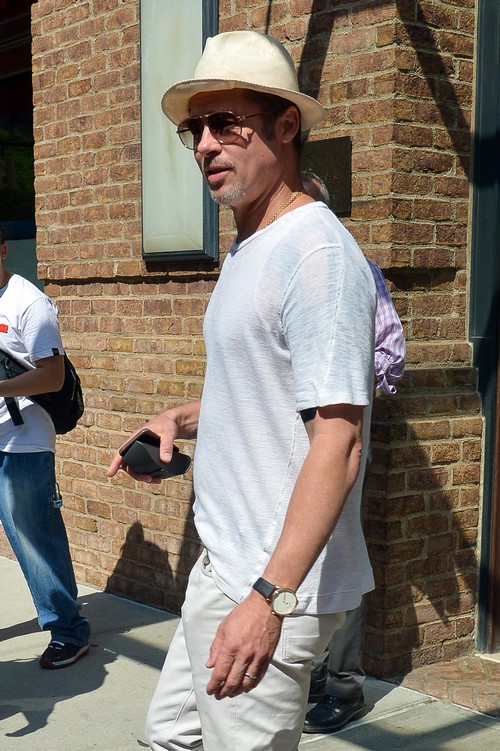 Is Brad Pitt and Angelina Jolie’s marriage in trouble? Is a Brangelina divorce happening before the end of this year? That’s what fans can’t help but wonder as Brad Pitt has been flying solo all summer long while Angelina Jolie has been left to take care of the couple’s six kids of her own.

Brad Pitt and Angelina Jolie have not been photographed together for months now, which is of course leading to the speculation that their marriage might be on the rocks. Brad Pitt has been spotted flying in and out of LAX, JFK and Heathrow with his wife no where in sight, which is rather out of character for the image-obsessed actress.

But knowing how much Angelina Jolie’s career depends on her box office success, there’s no doubt that ‘By The Sea’s’ failure also caused some major friction in their marriage, too.

Luckily for Brad Pitt and Angelina Jolie’s kids though, it looks like the actress is determined to make things work, no matter how hard they might be. Angelina Jolie was recently spotted taking her kids shopping at a local mall near their home in Hollywood while trying to look as “normal” as possible, despite her fame and celebrity status.

“Angie tries to make the kids lives as normal as possible,” one source dished to Naughty Gossip. “She puts on sunglasses and a hat and often goes out in public. Most times no-one even notices that it is her. You would be surprised all the ‘normal’ places she goes. Look around next time you are shopping, you might be standing next to Angelina Jolie.”

Perhaps Angelina Jolie’s efforts in trying to normalize her life will help bring her and Brad Pitt out of their marriage rut? Either way, it sure doesn’t help that Brad Pitt is no where to be seen whenever his wife and kids are out and about together. Whatever the case may be, here’s hoping that Brad Pitt and Angelina Jolie manage to work through their marital issues before another Hollywood divorce is announced.

Check back with CDL for all the latest updates on Brad Pitt and Angelina Jolie’s relationship status along with all of your favorite celebrity couples right here.