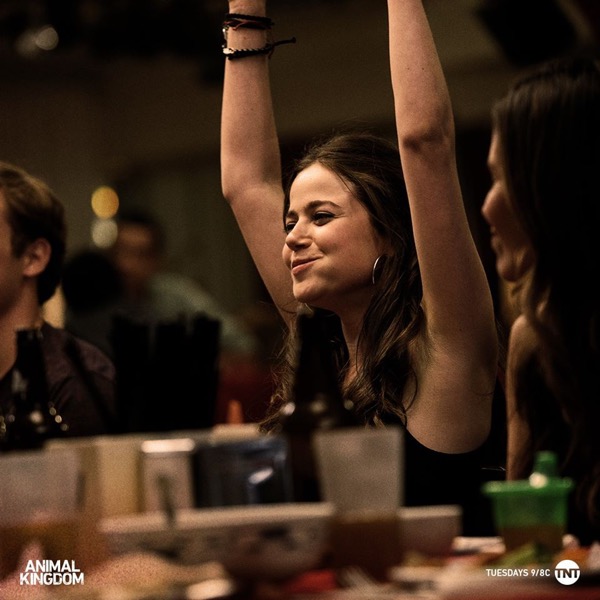 On the last episode, Pope’s birthday approached as Smurf probed whether the boys were playing by her rules. Did you watch the episode? If you missed it we have a full and detailed Animal Kingdom recap, right here for you.

On tonight’s episode per the TNT Synopsis “Pope goes to extreme measures when Deran won’t return home. Meanwhile, Baz comes up with an idea for Cody’s next job; J goes out with his teacher; and Smurf faces her past.”

Tonight’s episode of Animal Kingdom looks like it is going to be great and you won’t want to miss it, so be sure to tune in for our live Animal Kingdom recap at 9:00 PM EST! While you wait for our recap hit the comments and let us know how excited you are about season 1 episode 5 of Animal Kingdom.

Tonight’s episode of Animal Kingdom kicks off with Deran on the beach surfing, Baz tracks him down. Baz tries to get Deran to come home and says that Smurf needs him for a new job, Deran refuses to come back with him.

Baz returns empty handed and Smurf is sitting around arguing with Craig and Andrew over what they should do for their next job. Andrew wants to hit a bank but Smurf says that it is too dangerous, she doesn’t want him to wind up back in jail.

Their bickering is interrupted by someone at the front gate. Smurf and Craig head out to meet him, he introduces himself as Paul and says that he is Nicky’s grandfather. Paul says that Nicky lied and said that she was at a friend’s house. Smurf confesses that Nicky has been spending the night at her house with Jay. She invites Paul and his family over for dinner so that they can straighten it all out.

Inside, Andrew is getting filled in on Deran’s tendency to run away by Baz. Smurf tells them that they have to have dinner with Paul and his family so that they don’t call the cops for Nicky sleeping with Jay. Everyone whines that they don’t want to have dinner but she says that it is not an option. She tells Baz to go get Deran and he has to bring Cath to dinner too.

Meanwhile back at the beach, Deran is introduced to a guy named Dave through mutual friends. Deran makes fun of Dave and things get awkward.

Smurf doesn’t want Andrew at dinner when Paul comes over, she gives him keys to an apartment on the beach and tells him that is where Deran is staying When he arrives the house is disgusting and full of garbage and rotten food. Andrew makes a hal-hearted attempt to clean it up, and then he sits down in a chair to wait for Deran.

Smurf is having a talk with Nicky before Paul and his wife arrive for dinner. She tells her to say that she always stays in the guest room. Baz returns and says that Cath won’t be joining them for dinner – apparently, she has the flu.

Craig heads to Renn’s house to check on her, she’s not doing too well, she says that she got robbed by a guy named Sage and apparently he roughed her up. Renn tells Craig that she wants him to “take care of Sage” and make sure that he never walks again.

Paul arrives for dinner, and everyone sits down to eat and acts civilized. Apparently, Paul was in the NAVY, he eats and talks about his glory days. Paul sees a bit off, his wife tries to shoosh him. After dinner, Smurf and the boys walk Paul and his family out, everything seemed to go smoothly. After they leave, Smurf asks Jay is he has somewhere to be, she saw him check his phone 20 times during dinner. He rushes off.

Back at the beach, Deran is hiding out outside of a bar and watching one of his friends that he was surfing with earlier. He follows him home and sneaks in his window, then they have sex together. Deran takes a shower afterwards, and his boyfriend follows him in to the bathroom. He tells Deran that they can’t see each other anymore because his boyfriend Dave is going to find out. They get in to an argument and he shouts at Deran that he needs to tell Smurf that he is gay and stop hating himself.

Jay rushes off after dinner and meets up with an older woman, they head to an art gallery exhibit together. They wander around sipping wine and she tells him all about the paintings and what they mean to her. Afterwards, she invites him in to her house or a nightcap.

Andrew stays at Deran’s apartment all night, but he never shows up. He tracks down Deran’s boyfriend and questions him, but he insists that he doesn’t know where he is. It’s obvious that Andrew is suspicious and thinks that something is off.

Baz skips town to meet up with his girlfriend Lucy. They spend the night together and in the morning they argue over their relationship status. He insists that Cath doesn’t care where he is, he just doesn’t want Smurf to find out about them. Lucy and Baz get in a fight, she’s sick of him being Smurf’s errand boy, she wants him to stand up to Smurf and do his own jobs.

Smurf heads in to Jay’s bedroom, she questions him about where he ran off to last night. He says it was just a school thing, an art show. Smurf wants to know why Nicky didn’t go with him, Jay just wants to do his own thing sometimes. Smurf tells him on the way home from school to pick up the rent checks for her. Then, she heads to the laundry room and snoops through Jay’s pockets to try and figure out where he has been sneaking off to.

Andrew finally finds Deran on the beach surfing. Deran explains that he can’t handle Smurf and he leaves to get away from her. Andrew changes the subject and asks about Deran’s trip to Belize, but Deran doesn’t want to chat. He tells Andrew that if he does a favor for him – then he will come home.

Craig tracks down Sage, he tries to settle things with him semi-civilly, but Sage pulls a knife on him. Craig proceeds to beat the crap out of him and leaves him lying in the dirt behind the garage where he works.

Jay hits the boardwalk with Nicky, she won’t stop rambling and is obviously getting on his nerves. He tells her he has to go pick up the rent checks and rushes off. Jay picks up the rent checks, and one of them is missing so he has to go knock on the door. The guy answers the door and invites Jay in to smoke weed with him, he ruffs Jay up and says that he needs a few days to come up with it. Jay doesn’t take “no” for an answer and the guy hands him an envelope finally.

Smurf heads to the gallery where Jay was the night before, she meets the photographer, a woman named Lila. Smurf says that she recognizes one of the guys in the photos and wants to know where she can find him. Lila says that she can’t give out that information. Smurf seduces Lila and gets some information out of her, she says that the guy in the photo was creepy and he had an airplane hangar full of classic cars.

Baz arrives at Smurf’s house and she isn’t home, he finds Nicky sitting out back by the pool. She says that Jay is being weird and he is ignoring her phone calls. Baz offers her a beer and makes small talk about her family. Nicky chats about how crazy her dad is, and says that he is constantly carrying a briefcase and acts like it is full of classified documents.

Jay shows up at his teacher’s doorstep, the woman that took him to the art gallery. He barges in and kisses her, she pushes him off and says that they can’t do this. Jay laughs and says that he will see her in class and leaves.

Andrew heads to the dock in the middle of the night, he finds Dave working on a boat. Apparently this is the “favor” that Deran was talking about. Andrew hits Dave with a tazer and knocks him out, he ties Dave up and then takes his boat out in to the middle of the ocean. Dave wakes up and Andrew pushes him in to the water with his hands still tied. He treads water and screams at Andrew and asks why he is doing this. Andrew drives the boat back to shore and shouts at Dave that he doesn’t even know what he did.

Smurf heads home and continues to stare at the photo of the strange guy from the gallery while she lays by the pool. She has a flashback of herself swimming in a pool when she was a little kid and the creepy guy from the picture is standing over her.

Craig wakes up and Renn is sitting there watching him sleep. He has a bandage on his chest from his fight with Sage. Renn thanks him for getting her stuff back from Sage and having her back. She offers him some drugs as a thank you gift.

Deran is down at the beach and his boyfriend shows up, he is furious, he screams at him about what happened to Dave. He shouts that he can’t send his thug brothers to try and kill every guy he starts sleeping with. Deran laughs it off and says he will see him tonight. Deran heads home and Smurf is thrilled to see him. She sits outside and hugs him and kisses his head.

Meanwhile, Baz is working on his own new job, apparently he was inspired by his chat with Nicky about her dad. He has been staking out the nearby Naval base. Baz heads home and tells Smurf that he has an idea for a new job and it is something big – but he won’t tell her what it is yet. Baz looks outside and sees that Deran is home, that explains why Smurf is in such a great mood.

Jay’s teacher heads down to the pier and meets up with the Detective. She is setting up Jay and trying to get information about his family.