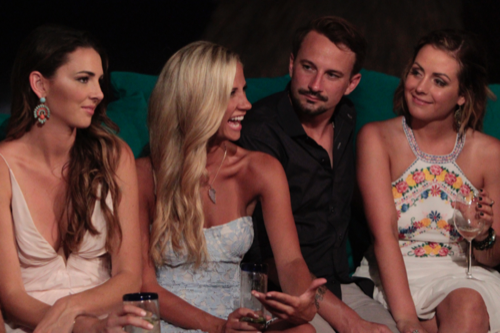 Did you watch last week’s episode where Caila And Jared left together and new girls arrived?  If you missed the episode, we have a full and detailed Bachelor in Paradise recap, right here for you!

On tonight’s episode as per the ABC synopsis, ” In the first night of a two-night finale, a new arrival is disappointed to learn all the men are already paired up; a disinterested bachelor leaves a fickle woman heartbroken so she exits Paradise in hopes of winning back the man she spurned; a handsome hairdresser sends himself home during the rose ceremony and leaves three women without roses; a struggling suitor ends things with his emotional bachelorette who leaves Paradise again without the man of her dreams.”

We will be blogging tonight’s episode of the Bachelor in Paradise and because it is the first night of a 2-night finale you just know there is going to be lots of drama. So bookmark this spot and come back tonight at 8PM – 10PM for our Bachelor in Paradise recap. While you wait for the recap, make sure to check out all our Bachelor of Paradise, news, spoilers, recap & so much more!

Night one of the Bachelor In Paradise finale kicks off tonight with the couples on the beach, there’s a pretty somber atmosphere in Paradise. The couples know that time is running out, and this week they will have to decide if they are leaving paradise together and getting engage or breaking up.

The last girl to arrive in Paradise makes a shocking debut during breakfast. It’s Tiara from Ben Higgins’ season of The Bachelor. She got a kind of goofy reputation on The Bachelor as “The Chicken Enthusiast” All of the guys are actually surprised by how attractive Tiara is though. Tiara decides to get to know some of the guys in Paradise, even though they are all coupled up.

Interestingly, Nick Viall joins Tiara on the beach and they have a chat. Jen watches from far away and is certain that Tiara is going to take Nick on a date. She’s getting a little jealous. Jen and Tiara return to the group, and Nick announces that he is going on a date…with Jen. Apparently, he was able to convince the “Chicken Girl” to let him and Jen use her date card. Jen is super excited – she and Nick definitely need a date and some alone time so that they can decide whether or not they will be leaving paradise together.
Later that night, Nick and Jen head to a carnival in town. Jen is falling in love with Nick, but she is a little on edge because she can’t tell what is going on inside his head and what he thinks about her. The couple sits down with a fortune teller, she doesn’t have too many good things to say about Nick and Jen’s future. The fortune teller says that Jen is giving more than she is receiving in the relationship, and Nick has “one foot in and one foot out of the relationship.”

After their disastrous meeting with the fortune teller, Nick is desperate to turn their date around. He decides that this is the perfect time to reassure Jen that his feelings for her are real – and he is falling in love with her. Of course, Jen is thrilled that he’s finally opening up to her. Meanwhile, back in Paradise, there’s a storm brewing. Brett and Lauren H. head to the beach to talk in private. Brett reveals that he wants to get to know her more, and that he isn’t really feeling Izzy any more. Brett is going to give his rose to Lauren H. tomorrow, and it’s not going to be pretty when Izzy finds out, seeing as how she dumped Vinny for Brett.

Meanwhile, back in Paradise, there’s a storm brewing. Brett and Lauren H. head to the beach to talk in private. Brett reveals that he wants to get to know her more and that he isn’t really feeling Izzy any more. Brett is going to give his rose to Lauren H. tomorrow, and it’s not going to be pretty when Izzy finds out, seeing as how she dumped Vinny for Brett.

After Brett’s talk with Lauren H, he takes Izzy aside and tells her that he doesn’t feel a connection with her and he is going to give his rose to Lauren H. Izzy says that she understands and it is water under the bridge – she’s going to go home. Izzy heads back to her room to pack. She sobs to Amanda and Lace that she made a horrible mistake and she is leaving Paradise to fid Vinny because she is in love with him. Izzy is nervous, she is scared that Vinny might still be upset with her and won’t see her.

In the car on the way to the airport, Izzy calls Vinny. She cries on the phone to Vinny that she made a huge mistake and she regrets what she did to him in Paradise. Izzy apologizes for hurting him and tells him that she left Paradise for him and wants to come to Florida and talk to him. Izzy of course leaves out the fact that Brett just dumped her. Vinny tells Izzy that he doesn’t want to see her and there is no coming back from what she did, then he hangs up on her. Izzy starts having an anxiety attack in the car and tells the driver to pull over so that she can throw up.

The next day in Paradise, it’s time for the final rose ceremony. Tonight the guys will be handing out the roses to the girls. At least 4 girls will be going home tonight. Before the rose ceremony, they have one last cocktail party. Jami, Ashley I, and Shushanna are all gunning for Wells’ rose tonight. He spends some alone time with each one of the girls before it is time to pass out the roses. Shushanna and Wells’ conversation doesn’t go well – she informs him that she is going home before the rose ceremony, she is sick of Paradise, and it’s obvious that she and Wells’ have no connection. She wants a guy that will fight for her, not someone who is trying to choose between three different girls.

The next morning, Chris Harrison crashes the final couples’ breakfast – there are only 10 people remaining. Chris announces that it is time to put the relationships to the test. It’s time to see if they are capable of moving their relationships out of paradise and in to the real world. He tells the couples that it is time for them to decide if they are serious about each other, and whether or not they will be going on Fantasy Suite date later that night.

All of the couples are thrilled to spend the night together in the Fantasy Suite, but Wells and Ashley are up in the air. They have a long chat, Ash and Wells are both on the same page and they know that they aren’t going to get engaged. Ashley joked earlier with the other girls that she can’t wait to spend the night with Wells. However, he informs Ashley that he thinks that it is against his principles to spend the night with her when they aren’t in love. Ashley is obviously upset, and Wells informs her that he is going to go home. They say their goodbyes, and Ashley heads back to her room sobbing.

Now, that Ashley and Wells have left – there are only four couples remaining, and it is time for their final dates. Lace and Grant head in to town together and spend their afternoon taking in the sites and shopping. Lace and Grant decide to get matching tattoos that say “Grace” – a combination of their names. Grant is all in, he sits down and gets the tattoo without any hesitation. Then it’s Lace’s turn, she gets in the tattoo chair and has a meltdown – she runs out of the shop and doesn’t get the tattoo. Grant’s not impressed…After a few minutes Lace returns and sits down and get the tattoo.

Meanwhile, the other couples are on their dates as well. Although they aren’t going all out and getting matching tattoos – they are still having a good time. Evan and Carly are of course on a super quirky date – they’re painting each other’s bodies. Amanda and Josh head to the park to watch a kid’s soccer game, they talk about Amanda’s kids, and Josh has plans to get them in to sports when they get older.

Later that night, it is time for the Fantasy Suite dates. But first, the couples have to sit down for one last romantic dinner together. Carly is secretly freaking out. Last year at this time was when Kirk blindsided her and dumped her. She hopes she and Evan don’t suffer the same fate and desperately wants him to tell her that he loves her. And, Carly gets her wish. The couple shares a heartfelt conversation and tell each other that they love each other.

Meanwhile, Nick and Jen are having a similar conversation. Nick mentions trying to have a long distance relationship after the show is over and expresses how much he cares about her and that his feelings are real. After dinner they head to the hot-tub for a hot make out session and then head to bed together.
Lace and Grant finish up their dinner and have drinks together. Lace FINALLY tells Grant that she loves him, and she can’t wait for him to propose tomorrow – they head to the fantasy suite together and Grant closes the door.