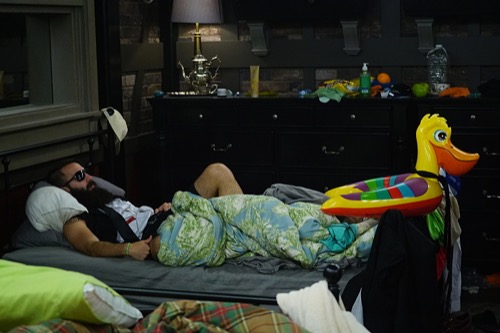 Tonight on CBS Big Brother 18 airs with an all new Thursday, August 25, season 18 episode 31 and we’ve got your Big Brother 18 recap down below! On tonight’s episode, another houseguest is evicted from the compound.  For all Your BB 18 news, spoilers & more, head over HERE!

On the last episode, houseguests went head to head competing for the Power of Veto. Did you watch the last episode? If you missed it we have a full and detailed Big Brother 18 recap, right here for you.

The Big Brother 18 recap begins tonight at 8pm with an exciting new episode, we will be live blogging the show with all the up-to-the-minute details so make sure to come back to Celeb Dirty Laundry and watch the show with us. Can’t wait to see how all the drama plays out, how about you? Are you excited about the Big Brother 18 recap tonight? Who are you rooting for to win? Hit the comments and let us know your thoughts.

#BigBrother18 picks up after the renom ceremony when Corey was put on the BB18 Chopping Block by Michelle. Julie says right after the LIVE eviction, there will be an epic endurance comp between the jurors and the four houseguests that will play for HoH.

Victor hands out hugs after the Veto Meeting and he hopes that he can stay instead of Corey. He knows he has Paul’s vote but Corey has Nicole’s vote, so James is the one vote up for grabs. James knows that he has the deciding vote and it’s tough.

Corey wants Paul rattled before the HoH comp so he can’t win it. Paul tells Victor that he doesn’t like the way James and Natalie are talking and Victor says he’s being paranoid. Paul thinks James is being sketchy talking to Corey in the yard.

Victor comes outside to intrude on their conversation while he does laundry. All talk stops. Paul waits in the kitchen. Victor comes in and reports that they stopped talking when he came out. Victor says he’ll fight to stay in as best he can.

Paul says to throw his name under the bus and for Victor to tell James, Natalie and Michelle that he’s targeting Paul if he stays. They part and go to work trying to sway the house. Paul plans to spend all his time with Nicole and Corey.

Paul wants to spend as much time as he can with Nicole and Corey and also for Natalie and James to see him talking to them. Paul also stops talking whenever they come by. Victor goes upstairs and sees that Natalie, James and Meech have noticed Paul talking to Nicole and Corey.

Victor says Paul has bailed on him because he thinks he’s leaving the house. Victor wants them to think he and Paul are on the outs. Michelle says Paul is playing both sides. Natalie says she thinks Paul has thrown them under the bus.

They tell Victor that Paul hasn’t tried at all to save him. Victor acts and says it pisses him off the way Paul has turned on him. Victor tells those three that Nicole, Corey and Michelle will come for them. Victor says he’ll go after Paul if he stays.

The #BBJury house sees the women all getting along. Bridgette is cooking for them and they discuss who might be controlling the house. Bridgette says she hopes she messed up Paulie’s game. She hopes to see him walk through the doors.

Da’Vonne says they need to hurry up. The car pulls up outside and Zakiyah wonders if it’s Big Meech. Zakiyah says if it’s Paulie, she has a lot to say. When he comes in, Day and Meech cheer and Z just glares and doesn’t say anything.

Da’Vonne gives him a hard time. Paulie says there’s a lot to be said and Z agrees. She doesn’t want him around her but is happy he doesn’t have the chance to win any money. Day says she’s glad he shaved off his Paul beard. Paulie calls them catty and petty.

Day gives him the business – Paul is in jury hell

Day says he has short guy complex and Paulie has no choice but to take it. He shows them the video of the comp he lost when Victor won HoH. Day laughs because Victor sent him out. She laughs later and says he’s salty about that.

The girls cheer when they see Victor nominate Paul. Paulie says someone got to Vic and convinced him to nominate him. Day asks if Paulie is mad and Bridgette says she sees that his ego is deflated and laughs. Day says the people she still wants to win are in the house.

Da’Vonne says she’s glad he’s there and Bridgette says Paulie lost all her respect. Paulie says she has respect for no guy and she laughs and says he belittles women and treat them badly. Paulie again calls the three of them catty.

The women continue laughing at him

Paulie is further tormented when they laugh at him getting a zero in the PoV comp. Day asks what it feels like to get sent out on his boy’s HoH. Bridgette says he lost a long time ago and would never have the jury votes even if he stayed in the BB18 house.

Bridgette says Paulie made too many horrible comments about women. He calls her bitter. Day says she’s not bitter and says he had her vote up until the Zakiyah situation. Z says Paulie was against her and asks if he was lying to her face the whole time.

Paulie says things come out. Z says she had his back and he says she was playing the victim. She calls him a b*tch and a loser. Day is happy that Zakiyah is standing up for herself with him. Paulie says she got pissy and was jealous.

They go off on each other. The women walk away and Zakiyah calls him a b*tch again and Paulie says she’s so “classy.” Zakiyah says she didn’t come there for a boy and they all leave him. Paulie cannot be liking this situation in jury.

Julie tells them it’s time for the eviction vote. Victor says hi to his family and says it’s been a crazy summer and says he’s loyal to those loyal to him. He says he would like to stay in the house. Corey says hi to his folks then says he hopes they keep him.

The voting starts – this will be fast. Here’s how it goes.

Julie announces that Victor is evicted and has to say goodbye. He nods because he knew it was coming and gives hugs to everyone. Nicole tells Vic he’s a beast. He hugs Paul warmly and says he loves him. Meech says she hopes that the crowd roars for him. They do!

Paul tells the others that he’s fine. They comment that Victor’s pic is blacked out again and they wonder if it could be a Double Eviction night. Meech says no. Victor tells Julie that he’s a strong competitor and they were scared to keep him in the house.

Julie asks Victor about evicting Paulie and he says Paulie betrayed him and he needed to get him out when he could. Julie asks what he did differently the second time and he says he aligned himself differently but he knows he’s not the best socially since he can’t lie well.

Victor says he hopes that Paul gets the Care Package and stays safe. Julie asks who he wants to see evicted next and he says he doesn’t care, he just hopes Paul does well and calls him his ride or die. They watch his videos. Meech says she hates that he was evicted and wanted Paul out.

James says he’s sorry and it’s a game move, not personal and he says he fought a good fight. Paul says he’s kicking himself for Victor leaving and he tried to keep him safe. Natalie says sorry and says Paul was her target and says she’s glad they were friends.

Victor tells Julie that he’s happy that he got a second chance. Julie asks what if he had another chance. He laughs and claps. He says he can walk back in right now and Julie says he has an unprecedented second, second chance. She says he will compete with the jurors to get back in the game. He’s thrilled.

Over at the Jury House, we see the four jurors chatting and Paulie jokes that he got a warm welcome. Day says that’s all worked out and Zakiyah says it was a good weekend and she’s avoiding Paulie. Bridgette laughs and says it’s been great.

Paulie knows he’s walking on eggshells and Z won’t talk to him at all. The doorbell rings and Day runs to get it. There’s a basket with balloons for them from Big Brother. Day opens the envelope and it says they have a chance to get back into the house.

She says the last juror standing will move back into the BB18 house. Zakiyah says she hopes it’s not Victor coming back to battle them. Paulie talks about how he wants to beat the best to get back in there and says he’s going to walk in and back into the HoH room.

Julie welcomes the four jurors to the stage and they’re all excited. Julie tells them that they will battle against the houseguest evicted tonight. She brings out Victor. He runs to hug the girls first and even gives Paulie a hug.

Julie says they will compete in a LIVE competition and the winner will be back in the game. She says one of them could still win Big Brother 18. She tells them to get ready and then Julie reveals the twist to the BB18 house.

They come into the living room and Julie says there are lots of twists this summer and it’s not over yet. She says they will compete in an epic endurance battle for HoH. She then says the jurors will battle alongside them. The last juror is back in the game and the last standing is HoH.

The jurors are back in the house

Julie lets the five jurors re-enter the house and they get mad hugs and love from the remaining houseguests. As expected, it’s a wall comp! Natalie and Michelle have to watch the “Welcome to Loch Mess” comp. They just have to be the last one standing.

They are each on a ledge. Natalie, Paul, Corey and James are on one side and jurors Paulie, Victor, Da’Vonne, Zakiyah, and Bridgette are on the other. Bagpipes play while the wall tilts far forward. Those that were on slop all week may be hurting soon.

They have to hang on to a board behind them as the wall tilts wildly. Julie says who will rise to power and who will return to the game? This is a big deal and everyone is playing tough. You can see that no one wants to throw this. FYI, James wins wall comps like a champ – we’ll see.

The comp rolls on

The players are now being sprayed by cold water from the “monster” in the water. The comp is rolling on and can be watched after the show on the Live Feeds. Stay tuned to CDL for the epic conclusion results of the comp and for the announcement of Week 10 HoH and the juror who returns!