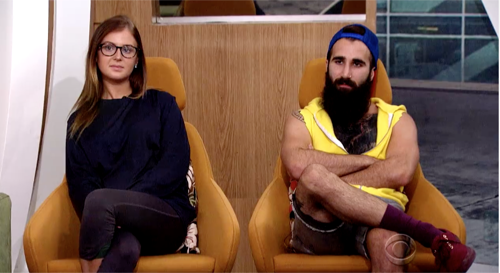 Tonight on CBS Big Brother 18 airs with an all new Wednesday, August 31, season 18 episode 33 and we’ve got your Big Brother 18 recap down below! On tonight’s episode, the Power of Veto competition is held.

On the last episode, the houseguests who are up for nomination were revealed! Did you watch the last episode? If you missed it we have a full and detailed Big Brother 18 recap, right here for you.

On tonight’s BB18 as per the CBS synopsis, “the houseguests go head to head competing for the Power of Veto and then the PoV Ceremony will be held.”

The Big Brother 18 recap begins tonight at 8pm with an exciting new episode, we will be live blogging the show with all the up-to-the-minute details so make sure to come back to Celeb Dirty Laundry and watch the show with us. Can’t wait to see how all the drama plays out, how about you? Are you excited about the Big Brother 18 recap tonight? Who are you rooting for to win? Hit the comments and let us know your thoughts – check out all your Big Brother news right here on CDL!

#BigBrother18 starts right after the nomination ceremony when HoH Nicole put Michelle and Paul on the #BB18 Chopping Block. Nicole’s target is Meech and Paul is acting as her pawn. James goes and tells Michelle that Paul is the target and he is on the same page with Nicole.

James buys what Nicole told her and we see a look back at her reassuring him. James tells Meech she needs to win the veto. Upstairs, Nicole tells Corey that Natalie isn’t talking to her but Corey says he doesn’t think that Nat is mad. He says if Meech wins veto, he could offer her the #BBBribe.

Paul comes upstairs and Nicole says he did good but she found James and Meech scheming about the veto. Paul says if Nicole wins the Veto, she doesn’t have to pull him off the block. Corey and Nicole tell Paul if he or Victor win, to pull Paul off the block.

Something fishy in the BB18 house

Nicole is determined that Meech doesn’t win veto so she can keep Natalie and James in the dark for now. Paul reassures her that he and Victor will go after Natalie and James next week. The food is delivered for the Have Nots. Nicole reads that it’s the first two HGs that fell in the Loch Ness comp.

That means Corey and Victor are Have Nots. Paul and James dance in joy that they are not Have Nots that have to dine on seaweed and squid. Victor is disgusted and Paul grabs a squid and chases Natalie around while she screams.

Nicole calls everyone for the Veto Comp player pick. All but one will play. Nicole is hoping Victor will win so she has to put Natalie or James on the block and they can send Meech out with no controversy. Nicole draws Victor. Paul draws choice and decides on Corey. Meech draws and gets James.

Paranoia swirls and James talks the girls down

Upstairs, Corey says it’s no big deal that Paul didn’t pick James or Natalie since he knows they would pull down Michelle. Nicole says the worst-case is that Meech wins it since she’d have to show her cards because she wouldn’t put Victor up as the renom.

Nicole doesn’t want to be forced to break the tie either. Nicole says don’t let Michelle win and they’re golden. The four of them agree but Meech is still stewing and worrying and she’s drawn Natalie into her drama but James isn’t sure they should be worried.

As the houseguests come out for the PoV comp, Corey is thrilled that they comp is Christmas themed. He loves Christmas and is over the moon. There are real live reindeer, ornaments, snow and all kinds of fun stuff. Natalie plays host for the compo.

They have to go in and count things in Santa’s mail room and will face the counting confidence comp. Meech is happy since she thinks she has an edge as a BB superfan. Nicole is also worried since she knows Michelle might do well in this.

Paul is ready to play hard because he’s not confident that he’s just a pawn. They all go to count then come back to their spots. They have to earn three candy canes to win the comp. Each answer will be a number. Then they decide if they stay or fold. If you stay and miss it, you are out.

Power of Veto comp kicks off

There are eight unfinished nutcrackers but how many finished ones are there. Victor hopes that he wins the veto to protect Paul. Corey has lost focus because he loves Christmas and is having an ADD moment. They all guess from 70 to mid-80s except Corey who goes much higher.

Paul fold and so does Corey. The answer is 77 so James and Nicole get a candy cane. Victor is out since he’s the furthest away. Next is a carrot question. The guesses range from 360 up to 671. Corey, Paul and Meech all fold. Paul plans to keep folding until Michelle goes out.

Nicole gets another candy cane and James is sent to the bench beside Victor. Round three is about names on the naughty and nice lists. Corey guesses a billion and Nicole is annoyed. Paul had 1555, Meech had 1801 and Nicole had 2350. Corey stays, Paul folds, the girls stay.

Michelle gets a candy cane and Corey is sent packing. Then Nicole realizes that by writing down the big number, he saved her butt. Meech thinks Corey was being dumb and doesn’t understand that his strategy was clever.

Now it’s down to Nicole and her two nominees. The next question is all about teddy bears in the workshop. Paul hopes Meech doesn’t win this. The answers are 115, 103 and 114. Wow it’s close. Paul folds and the girls stay.

The answer is 139. That gives Nicole her third candy cane and the Power of Veto win. She runs over to hug Corey. Natalie puts her PoV medallion on her. Nicole is happy. She’s hoping this means Meech will go. Michelle is confident and is sure Paul is a bigger threat for eviction.

After the veto, scheming starts

Nicole tells Corey that she didn’t know what he was doing with the billion thing. She says she would have been eliminated if he hadn’t done that. Victor comes up to hug them both. They have a #FinalFour high five. Victor is happy and says he trusts them 100%.

Victor tells Corey that he can bribe Nicole to keep noms the same but Corey thinks it might be better used elsewhere. They wonder where Paul is. He’s sleeping. Victor says don’t worry, Paul trusts you. Victor swears his allegiance and Corey says they’re good.

Victor goes to get Paul and Nicole tells him don’t be sketch when you go. Nicole asks Corey if they should flip and go after Paul and his jaw drops. Nicole says they can do whatever they want this week. Victor tells Paul to come upstairs and he says he’s trying to act upset.

Corey and Nicole debate which side to take

Nicole says they could take out the strongest two players in the game. Corey says you need to beat the best to be the best but Nicole is waffling and reconsidering. Corey tries to get Nicole back on board with the Final Four alliance.

James and Natalie notice that Victor has been distant and Nat says he’s hiding something. James doesn’t like how close Natalie and Victor have been. James says they voted out Victor like Nicole and Corey wanted yet he’s now closer to them.

Natalie says Victor might be getting close to Nicole and Corey since Paul will be evicted this week. James says he thinks they’ll honor the final four with them and James says he wants a battle of the showmances but he doesn’t know what Victor has offered them.

More paranoia leading up to PoV

Natalie says if Paul goes home, the two of them have Meech and the other showmance will have Victor. Paul and Victor sit in the safari room talking about how everyone else is cuddling and they’re boned. Paul says he misses girls and they talk about “what is girls?”

Meech sleeps but is woken and told to stop obstructing her microphone. She puts a blanket over her head and Big Brother chastises her again. She screams into her pillow. Natalie comes in to talk to her. Michelle starts crying about the microphone. Literally crying!

Natalie tells Meech to cry it out

Michelle says these people are fake and she can’t stand them. She says Nicole plays nice girl but has never been nice to her, even when she was HoH. Then Meech goes on and says she hates the way she looks and is ugly and has a fit after staring at her face in the mirror.

Then she says she hates that Victor is back in the house when he was evicted twice. Meech is full on bawling. It’s #SadMeech having a tantrum. Natalie goes to comfort her as Meech cries and continues to call herself ugly as she rants and sobs.

Upstairs, Paul talks to Nicole and says he’ll stay on the block and trusts Nicole. She says good. He says he’s happy that she won but couldn’t show it at the time. He says he’s playing his part and says he’s going to act bummed all week long.

Paul then says Nat and James are totally confident it’s not them and if Nicole puts Natalie on the block and pulls him down, he and Victor can vote against her and so can Corey. He says Nat will cry to James all week and he’ll freak out and so will Meech.

Paul says he doesn’t mind staying on the block, this is just a strategic idea to freak them all out. Nicole wonders if Paul doesn’t really trust her and Corey. Nicole says she has to think about her options. He says he’s going to go pretend to be bummed. Meech is still bawling in bed.

Nicole has to prepare for the #VetoMeeting. She gets her medallion on and considers the nominees and potential replacements. It’s time to decide to get blood on her hands, show her cards, or stay put and see where the chips fall.

Nicole calls everyone for the Veto Meeting. She tells them to make their statements. Michelle says congrats on winning veto and do what you want. Paul says the veto was tough and she’s good at match. He says taking him off the block is friendship, but do what’s best.

Nicole says she decided not to use the Power of Veto. Paul acts bummed and Meech is legit bummed. That’s it. We’ve got Michelle and Paul on the Chopping Block going into the LIVE eviction on Thursday night. James feels confident that Paul will be evicted.

Michelle and James talk about campaigning to keep her but Paul plans to block their efforts and make sure Meech is evicted. Nicole is hoping that she won’t have to break a tie. She says it’s a big decision since she’ll get blood on her hands either way.