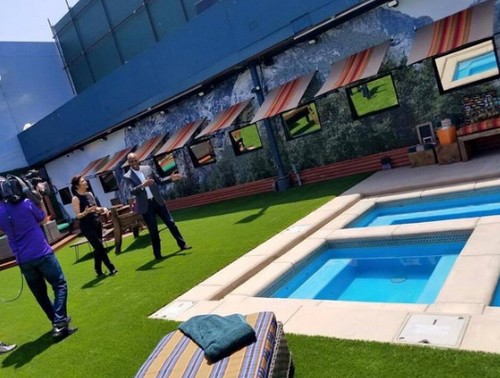 Are you ready for all the craziness that comes with “Big Brother 18”? Ready or not, it’s a little less than three weeks until CBS kicks off the new season and BB18 will be great. Big Brother Network revealed the new pictures of the (redesigned) house, and let me tell you; they are out of this world!

The first change to the Big Brother House was visible right away—the front door is double the size with double doors. The theme of the house appears to be “Travel World” with airplane wallpaper in the kitchen. The dining room has a compass on the table.

The bedrooms look completely different. One of the rooms is Japanese anime decor with an animal print comforter on the bed. We can see the showmances happening in this place.

The next bedroom is a British style photo booth. They didn’t release many pictures of this room yet.

The one room we didn’t see was the Have-Not room. That usually comes the second week in the house. Now to the place all the magic happens—the Head of Household room. It’s a fantastic Hawaiian themed room, with a fish tank over the large bed as the headboard. It looks like that could be the fish we’ll see when they cut feeds.

The bathroom is a beach themed room that seems to have sand covering the floor? Any bets on how long it takes for that sand to either get swept up or tracked all over the house? Outside there is a mountain and forest wall art with new turf and newly installed pools.

The pool is better than ever before with the hot tub and pool in one convenient area. Last week, it was revealed that CBS planned to make the structure of the BB18 house much more structurally secure, and do a total overhaul of the house.

Houseguests that were selected were instructed (as usual) to expect the unexpected this season. “Big Brother 18” fans, what do you think about the pictures of the house? Do you like the pool area? What big twist are you hoping to see this season? Stick with CDL for more “Big Brother” spoilers, news, and updates—all summer long!

Check The First Look At The New #BBUK House! pic.twitter.com/IK3JBH2n8g